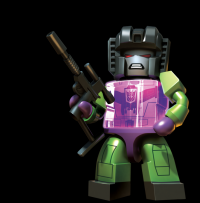 Hasbro's official Transformers website has been updated with several new Kre-O Transformers features. We now have bios for the series 2 Kreons and Kreon Micro-Changers series 1. You can also download a Kreon Micro-Changer poster by clicking here, and lastly play the new KRE-O Prime Defense Online game by clicking here. The new bios can be found below.


BARRICADE
Hey punks! I’m BARRICADE, and if you know what’s good for you, you’ll shut yer traps and listen up. I’m the baddest there is anywhere, and I ain’t afraid to pound a few suckers to prove it. You follow my orders, secure a little bit of ENERGON for me, and we’ll get along just fine.

Likes:
Laughing at the pain of others.

Secret desire:
To be taller.

CLIFFJUMPER
Yeah, yeah, yeah. I've heard it before. "You look just like BUMBLEBEE!" I know! But does that tin-plated punk pack a punch like me? I don't think so. If those DECEPTICON blockheads think they're getting any ENERGON on my watch, well, they are mistaken.

Off the charts. Smarts, not so much.

IRONHIDE
Hey there whippersnapper! I'm IRONHIDE – so called because nothin' gets through my armor! You kids today love yer blasters and explosions and so forth. You don't appreciate a good set of laserproof plates. Well listen up! Ain't no DECEPTICON getting past me! This Energon is safe as houses when Ironhide is guarding it.

Best Friend:
I’ve been a bodyguard to OPTIMUS PRIME since he was just one brick high.

Earliest Memory:
Blasting DECEPTICONS! I remember it like it was yesterday. Wait. It might actually have been yesterday.

Favorite Weapon:
My trusty Omega Black Hole Cannon. There’s nothing like the classics!

KNOCK OUT
Well hello. I’m KNOCK OUT, and I build and install weapons for the DECEPTICONS. Nothing makes me happier than watching one of my blasters blow the bricks out of a KREON. Well, except experimenting on folks. Speaking of which, have you ever considered replacing that weak old arm of yours with an ion cannon?

VORTEX
Wooooo! Ha ha! Hands in the air everybody, and get ready for the ride of your life! I’m VORTEX, and if I can’t terrify you with a series of dangerous aerial stunts into telling me where I can find some ENERGON, I’m not doing my job.

WHEELJACK
Ah! Welcome to my lab! Don’t touch anything! Everything in here is top secret, and probably explosive. My job is to help the AUTOBOTS track down ENERGON before the DECEPTICONS do, and while I usually focus my research on things that melt or detonate, ENERGON-tracking is interesting too. I guess.

Best Friend:
AUTOBOT RATCHET repairs me whenever I blow parts off.

OPTIMUS PRIME
I am OPTIMUS PRIME. I do not care for the hijinks of the other KREON robots. It is our responsibility to ensure that all brick-made beings are able to live in freedom. I do not have time for pranks.All I have time for is tracking down Earth’s precious ENERGON before MEGATRON does.

Likes:
Sending BUMBLEBEE on missions so I can get some work done instead of worrying about whose bricks he'll rearrange next.

Big Plan:
To defeat the DECEPTICONS and retire somewhere an idling truck will be accepted.

Protoform Pet:
I once had a cyberdog named Magnus. He was great.

MEGATRON
I am MEGATRON, the commander of the DECEPTICONS. Most everyone thinks I'm a pretty bad guy. But I'd like to call myself a KREON robot of many talents. Yes, I happen to be the most diabolically evil commander in the universe, but I also have a soft spot for life's finer things. . . like crushing AUTOBOTS! and capturing every last bit of ENERGON!

Favorite Restaurant:
Those seafood places that give you a bucket of crabs and a mallet.

Biggest Fear:
Being lost in a vast, unorganized box of KRE-O bricks.

BUMBLEBEE
'Sup? I'm BUMBLEBEE, and I'm just about the coolest KREON character you'll ever meet. When I'm not punking the other AUTOBOTS, I like to spend my time cruising the freeway at top speed, hunting for the ultimate source of ENERGON.

Favorite Hangout:
Anywhere there are lots of humans and loud music!

Big Plan:
To form a block-rockin' band. And also learn how to brick-surf.

SCORPONOK
I'm Scorponok, and I'm always one step ahead of the game. If you think you can outsmart me, you've got another thing coming – in the form of my toxic tail! I'm big, I'm bad, and if the Decepticons know what's good for ‘em, pretty soon I'll be in charge!

Favorite Hangout: The biggest throne he can find.

SUNSTORM
I'm so hot, I'm on fire! No, really. I'm actually on fire. My fusion-fueled fury pulses out through my cyberalloy chassis and melts anyone who gets too close. Sure, I'm fast and powerful, but it gets lonely being so scorching.

Fondest wish: To get a hug from someone whose arms didn't immediately melt off.

Big Plan: To learn how to chill.

SPINISTER
I am known as Spinister. I am dark, silent and dangerous. You are one of the few to hear of me and survive, so keep it on the down low, all right? I can't have a bunch of squishy humans blabbing my name and ruining my mysterious rep.

GALVATRON
Nothing stands before Galvatron! I am supreme! I am totally awesome! I am the scariest thing ever to come out of the mouth of a weirdly pudgy planet monster! Look upon me and despair!

CRANKSHAFT
What was that? Did you hear that? Someone's out to get me! I can't see ‘em, but I know they're there. A lot of the other Kreons call me paranoid. They think I'm off my brick. But you'd be paranoid too if you knew someone was out there hunting you.

Likes: Not being found

Enemies: Everyone, as far as he's concerned

WASPINATOR
WASPINATOR not like other brick-bots! WASPINATOR looooooves being taken apart! Oh yes! There is nothing WASPINATOR loves more than being just a head on a table! Please disassemble WASPINATOR!

Hobby: Getting blown up.

Also, Waspinator is kinda scaring me.

It's like he's gotten blown to bits so many times he's suffered mental damage! ...Come to think of it, it's quite surprising BW Waspinator retained his sanity.
Re: Transformers Website Updates: Kreon Series 2 and Micro-Changer Series 1 Bios, Kreon Micro-Changer Poster, & KRE-O Prime Defense Online game (1415790)
Posted by Va'al on September 1st, 2012 @ 2:18pm CDT
I love the bios on these guys.