Transfromers: Dark of the Moon - Stealth Force Edition for the Wii Reviewed 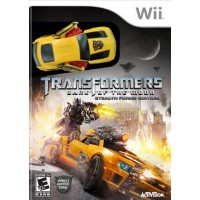 Seibertron Staff Member and man about Youtube Jon 3.0 has reviewed the Wii version of the Dark Of The Moon game.

I love Transformers... I love games but other than War for Cybertron, I don't normally care for Transformers games. Stealth Force Edition for the Wii isn't any different. There are so many flaws with this game that it was difficult to find GOOD things about the it.

As the name implies, this game is pretty much all Stealth Force mode missions. The names AND voices have been changed and not in a good way. Q is now Wheeljack but sounds like Perceptor, Soundwave sounds cool but is not Frank Welker. The Decepticons have much cooler character voices than the Autobots. Oh, and Dino is now named Mirage. Peter Cullen is better in this game than in the movie and some other familiar voices appear as well: Jess Harnell as Ironhide and Steve Blum (the voice of Starscream from Transformers Prime) as Starscream, Crowbar and additional voices. Besides a handful of actors, the voice acting is pretty standard videogame voice acting - overuse of phrases and actors being pitched to sound cooler or more menacing or just trying too hard to sound like giant robots.

The one thing that I thought would be good in this game is the graphics, but this is the Wii version. The graphics are very simplistic but even worse, the cut-scenes - which are the only reward for playing the game besides the satisfaction of beating it and enjoying the gameplay - are basic 2-D flash animations. Not to mention, you can't skip cut-scenes that play before the missions start. Even the Cyberverse Missions on YouTube are better animated.

The missions are far too easy to play and take far too long to complete. It's basically drive around and shoot things. If you get the feeling that the entire game feels like a commercial for Stealth Force toys, it's because it is.

Gameplay is basic and you will use the left-hand nunchuck a lot more than usual to drive normally, but the Stealth Force mode takes some getting used to because switching to Stealth Force mode also switches the driving controls to the controller and the nunchuck becomes the controls for strafing. The fire and Stealth Force-to-vehicle buttons are easy to use. The coolest control feature is the A button which causes you to do a 180 degree turn which really helps in both vehicle and Stealth Force modes because it's difficult to make normal turns with the regular directional controls. The game does not make full use of the Wii controls like Star Wars: Force Unleashed does. It is nearly impossible to miss a target and you have to actually try to get killed to fail a mission. In fact, most levels can be completed by driving around the maps in circles without actually facing any enemies. Oh, and enemies can be killed by running over them without taking any damage to yourself. You can play as both the Autobots and Decepticons which is a plus. Also Lockdown is very cool in this game, my favorite character in it, and it's nice to see him in action since we don't in the film. His vehicle mode has a slight touch of an Echo-1 sound from Ghostbusters when driving which gave me a little joy... and that was pretty much ALL that gave me joy. The game auto-saves at certain points in the missions in case you die or run out of time which makes it very easy to complete the missions.

One thing that games these days have that can give the entire game a boost is multiplayer. This game doesn't have it BUT it does have co-op missions using a split-screen... doesn't help. The co-op missions are a co-flop. Boring and repetitious like everything else about this game.

The story is nothing spectacular but works for what is obviously a game targeted at the under-12-year-olds. Sentinel doesn't make an appearance and "Operation: Pillar" is briefly mentioned but no major movie spoilers. If I were a kid/pre-teen, I would really love this game but even a casual Transformers fan or gamer will not really enjoy this game... hardcore fans and gamers will HATE it. It felt more like a DS game.

The music is good but monotonous just like the rest of the game and the sound effects are far less than impressive.

Overall, I would give it a 1.5 out of 5 because a 2 is way too good for it. In the words of the great Optimus Prime, this game "must be stopped... no matter the cost." Avoid it like cosmic rust.

jON3.0 wrote:In the words of the great Optimus Prime, this game "must be stopped... no matter the cost." Avoid it like cosmic rust.

Professor Smooth wrote:The game's so bad it doesn't even deserved have its name spelled correctly in the headline.

Lol I just noticed that!
Re: Transfromers: Dark of the Moon - Stealth Force Edition for the Wii Reviewed (1254252)
Posted by Bleak5170 on July 7th, 2011 @ 9:00am CDT
Haven't played it but the reviews I've read are almost comical. I mean, reviewers really seem to hate this game. R.O.T.R. were basically appalled that it even existed and advised avoiding it at all costs. They literally had not one good thing to say about it.