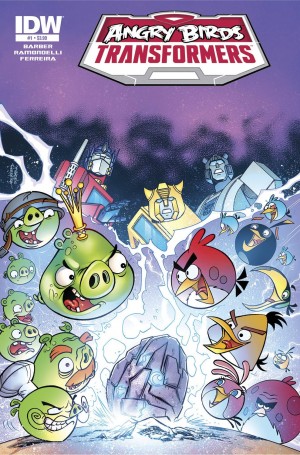 A while back we posted both the IDW Publishing Transformers comics solicitations and the news about the September cover of Previews taken over by robotic Sarah Stone art - but in further news, the magazine also included a short run through all the Transformers stuff to be expected from November 2014 onwards, including the Angry Birds crossover (with some preview artwork, too). Check it out in full here, and find out more below!

So you like Transformers, you say? You’d vacation to Cybertron if you could afford the space shuttle? Well, then the news we have to report to you this month should be quite tasty.

The truth is that IDW Publishing raises the bar for the walking talking robots with “The Days of Deception” story arc which begins in Transformers #35 (SEP140389), written by John Barber and illustrated by Andrew Griffith (who also renders the issue’s cover).

But it’s not like us to leave things on a sour note. Otherwise, why get out of bed. We all need some sunshine, and with Transformers: Drift — Empire of Stone #1 (SEP140392) by writer Shane McCarthy and art by Guido Guidi, there is cause for celebration because it’s the return of Drift! All is not lost, despite how the last time we saw Drift had left the Autobots in disgrace. A dark chapter, yes. A downer? Yes. The end of Drift, no! It turns out that the cosmic dungeon master that pulls everyone’s strings isn’t through with Drift. He now has a mission to clean up the darkest corners of the galaxy. Does this mean he’s been assigned to sweeping parking lots and vacant malls? Well, those are details that you’ll have wait for with the roll-out of this four-issue mini-series. One thing we can tell you is that Ratchet is back, and he’s trying to bring Drift home. For what reasons we don’t know, but Ratchet doesn’t seem to be willing to accept “no” for an answer.

This book is proof as to why you shouldn’t take life so seriously, because when you do you close yourself off to insane hijinx that you’ll find in this four-issue mini-series that smashes the Angry Birds and Transformers together to give you a new kind of tasty treat. If you willing to go insane in the membrane, then you’ll let it all hang out and follow along as the Transformers travel to Piggie Island to retrieve the powerful Allspark, which has turned the world of Angry Birds robotic! And with this overhaul of reality we get, of course, the Autobirds and Deceptihogs! How’s that for thinking out of the box? And would you want a crossover any other way?