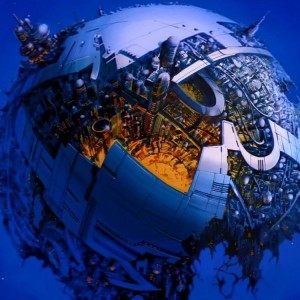 Welcome to the latest episode of the Seibertron.com Twincast / Podcast! This episode features your host ScottyP with xRotorstormx and RodimusConvoy13. Listen in as we discuss the latest news, toys, comics, milkshakes, and more.

Episode #176 "Moonbase Gray" is available directly and in our RSS Feed, and should appear on iTunes, Google Play, and Stitcher Radio within 24 to 48 hours of when you see this news post.

Yes, that's right, the Seibertron.com Twincast/Podcast is now available on Google Play! Be sure to subscribe today if this is your podcast platform of choice.

The show starts off with discussions of upcoming Masterpiece figures. First off is Masterpiece Beast Wars Dinobot. We've seen CGI renders of him and we discuss the intricacies of his tail. Will he be happy surrounded by Jurassic Park toys? Who is excited? Who wanted Megatron first? 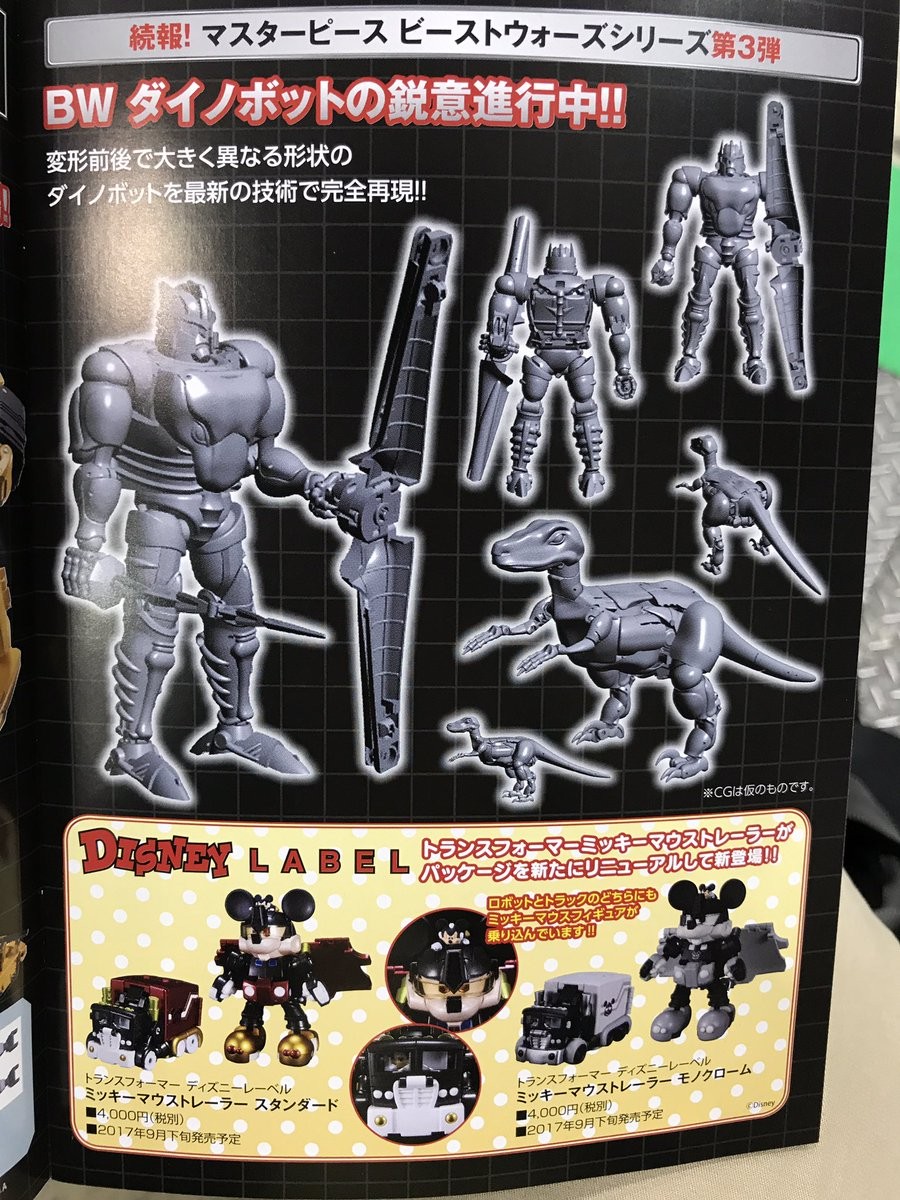 How'd you like it if I ripped a chunk out of your side?

Next up is MP 39 Sunstreaker. How good looking is this guy? Is this the end all be all of Sunstreaker? Or will we see a better version in a few years? Praises are sung and internet rumors are squashed. Are you excited about this guy too? 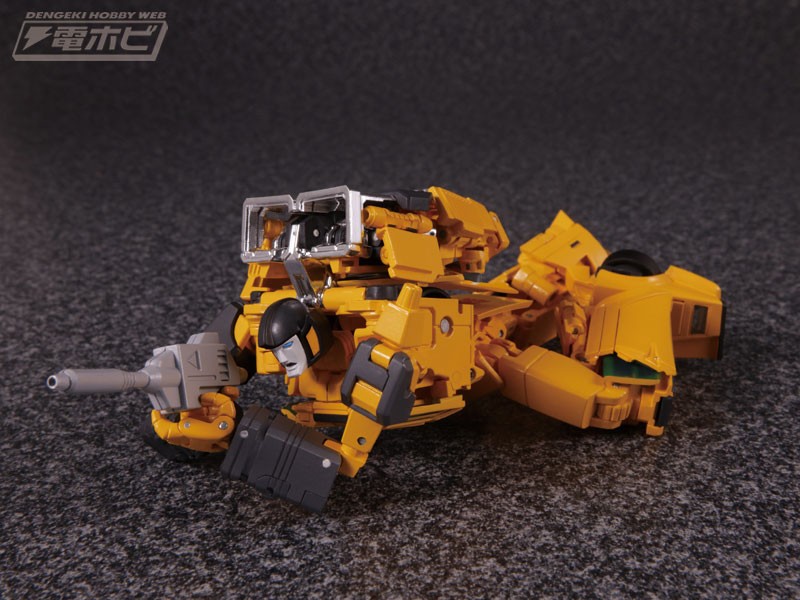 Seriously, how many Transformers can actually do this?

We move on to MP 12+ Sideswipe. Are you unsure of the differences? So are we! Get a play by play comparison to the original MP 12 as ScottyP holds his figure up to the new photos. What do you think? Do we need another Sideswipe? 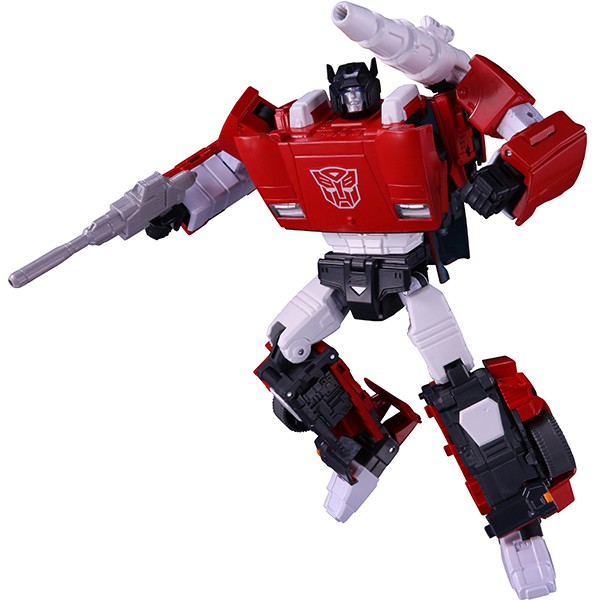 I really am different. Look closely.

And finally, Hasbro is rereleasing MP-10 Optimus Prime as a Toys R Us exclusive. It will share the same packaging and recent MP releases from Hasbro. Is this a good idea on their part? We were a bit surprised by this announcement, but we realize that it's a good thing. What do you think? Are you going to pick one up? Let us know your thoughts in the discussion thread! 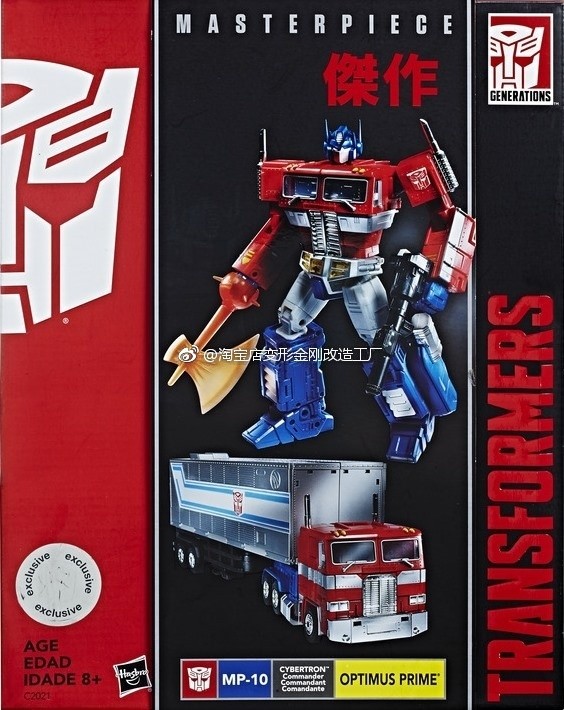 You thought I was expensive before?

Next up in our Toy Reveal Marathon, we look at the new Takara Legends figures. Recently announced was Legends Sixshot, Misfire, Doublecross, and Broadside! There's a new head, some Targetmasters, and even a BattleBeast! Hear our thoughts about the differences between these versions and the Hasbro versions. We also discuss some wishful thinking on the part of the fandom. 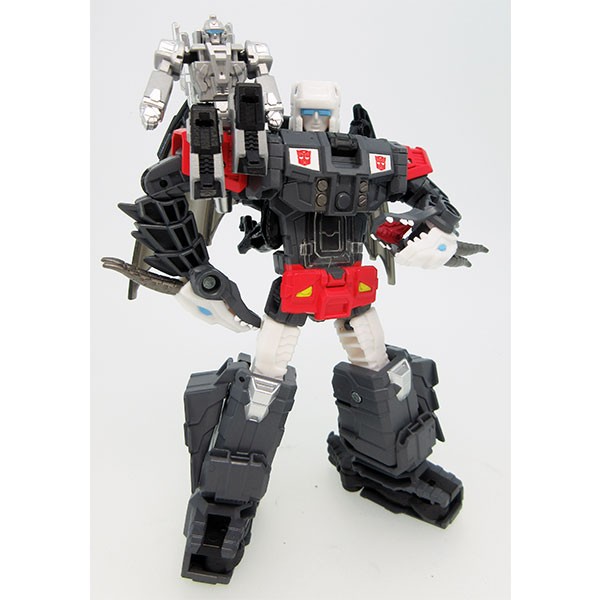 ScottyP opens his God Bomber as we record the show, but he's interrupted by a milkshake. Will he ever get back to God Bomber? We've heard some complaints about this guy. Do you have one? Sound off in our forums and let us know what you think of him. 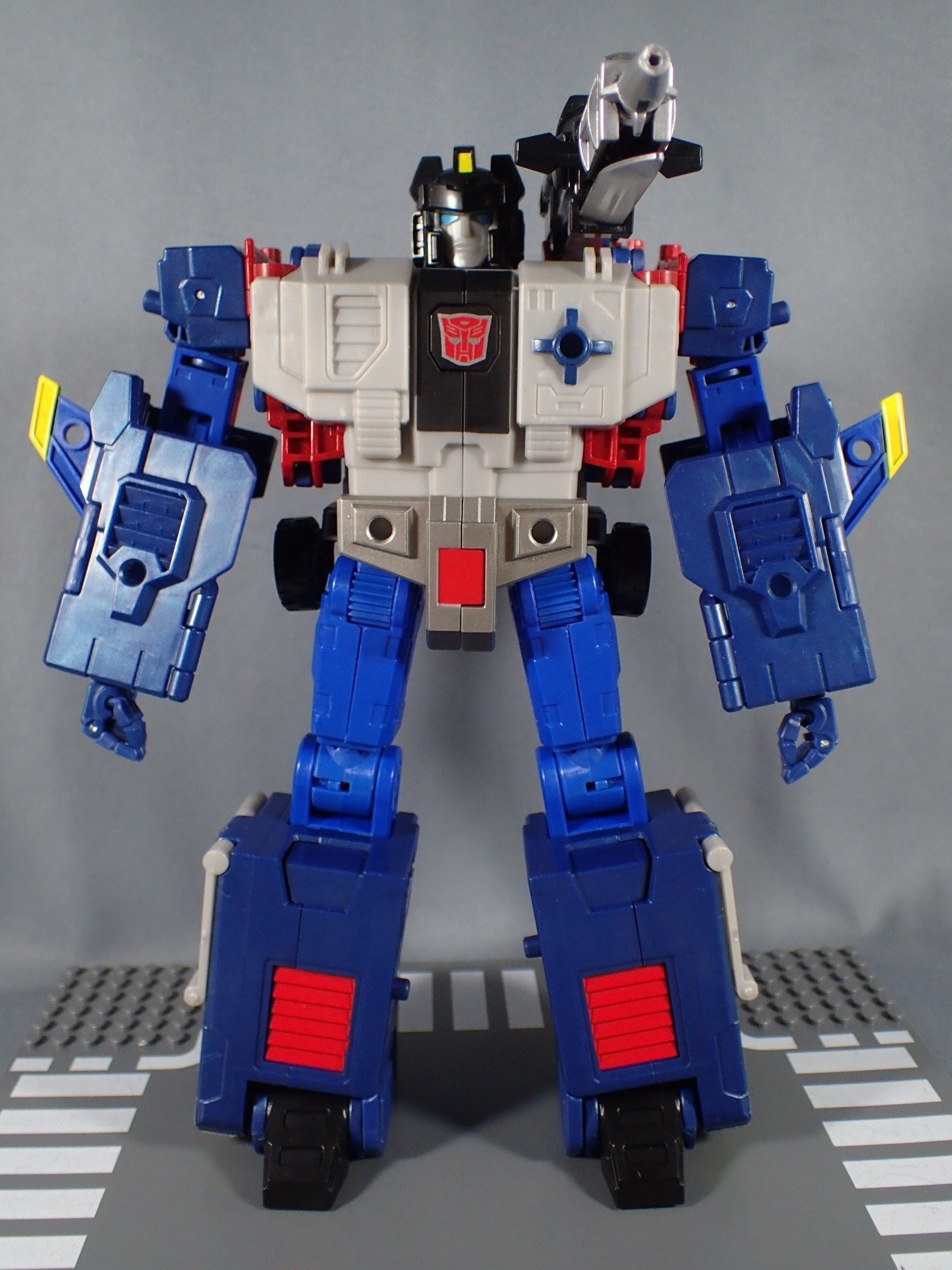 We now have images of Takara's Trypticon. What are the differences between this one and Hasbro's? We'll tell you. Yes we will. We will tell you. Ok, well, maybe we'll just guess and kind of... Look, it's Trypticon, ok. He's awesome no matter what company puts him out! 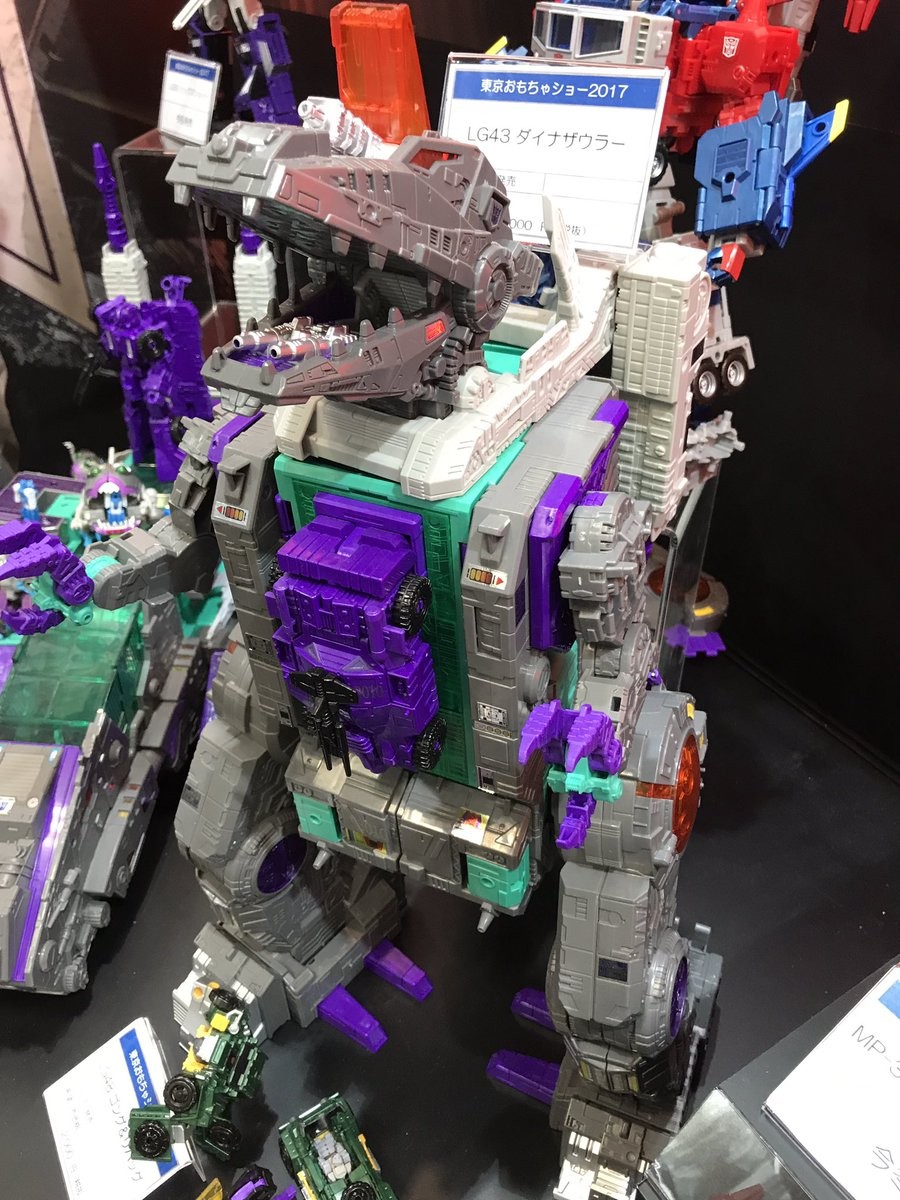 Transformers Tribute! Need we say more? Yes. The first announced set in the Transformers Tribute line is a two pack of deluxes. War for Cybertron Optimus Prime and Titans Return Orion Pax. Orion is a repaint of Titans Return Kup with an all new face. RodimusConvoy vents his frustration of not having a clear picture of the face and we discuss what other figures could have been in this set. 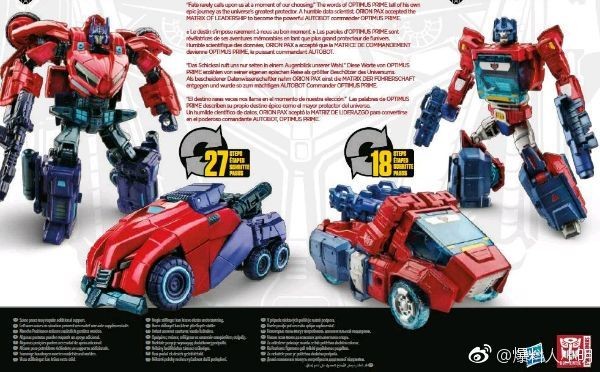 How may different Optimus Prime Titan Masters can one line have?

We're coming up on the last leg of our marathon as we get into newly revealed The Last Knight toys. We start out with Cogman and Hot Rod. Cogman is a Titan Master that is completely compatible with Titans Return figures. Hot Rod is not a repaint of Lockdown. We discuss the merits of each figure and how much we like that the two lines are crossing over a bit to appeal to fans. Does the Cogman figure represent what we'll get in the movie? We're not sure. We don't forget about Skullitron, but enthusiasm for him is not as high. 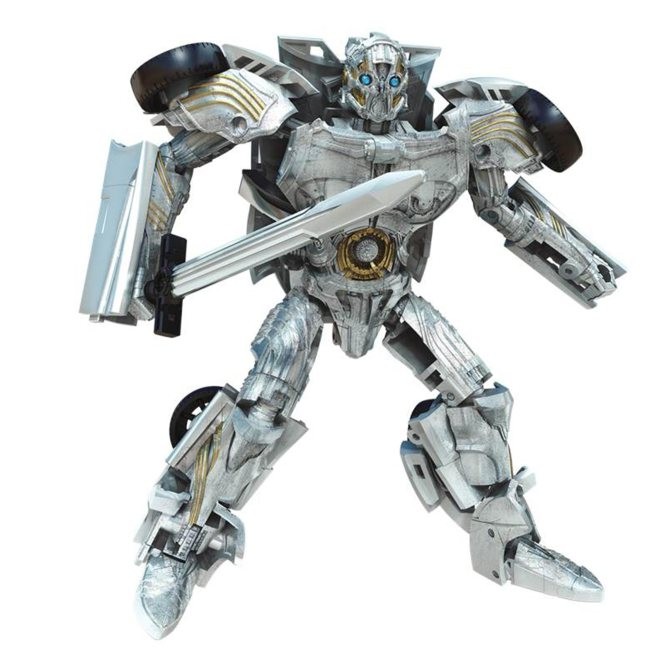 Oh, you Titans Return fans won't be able to resist me.

During the toy discussion ScottyP fills us in on the Hasbro Hangout he was on where he got to see a lot of these new figures and hear the throughs behind them from the creators. Check out his full thoughts here. 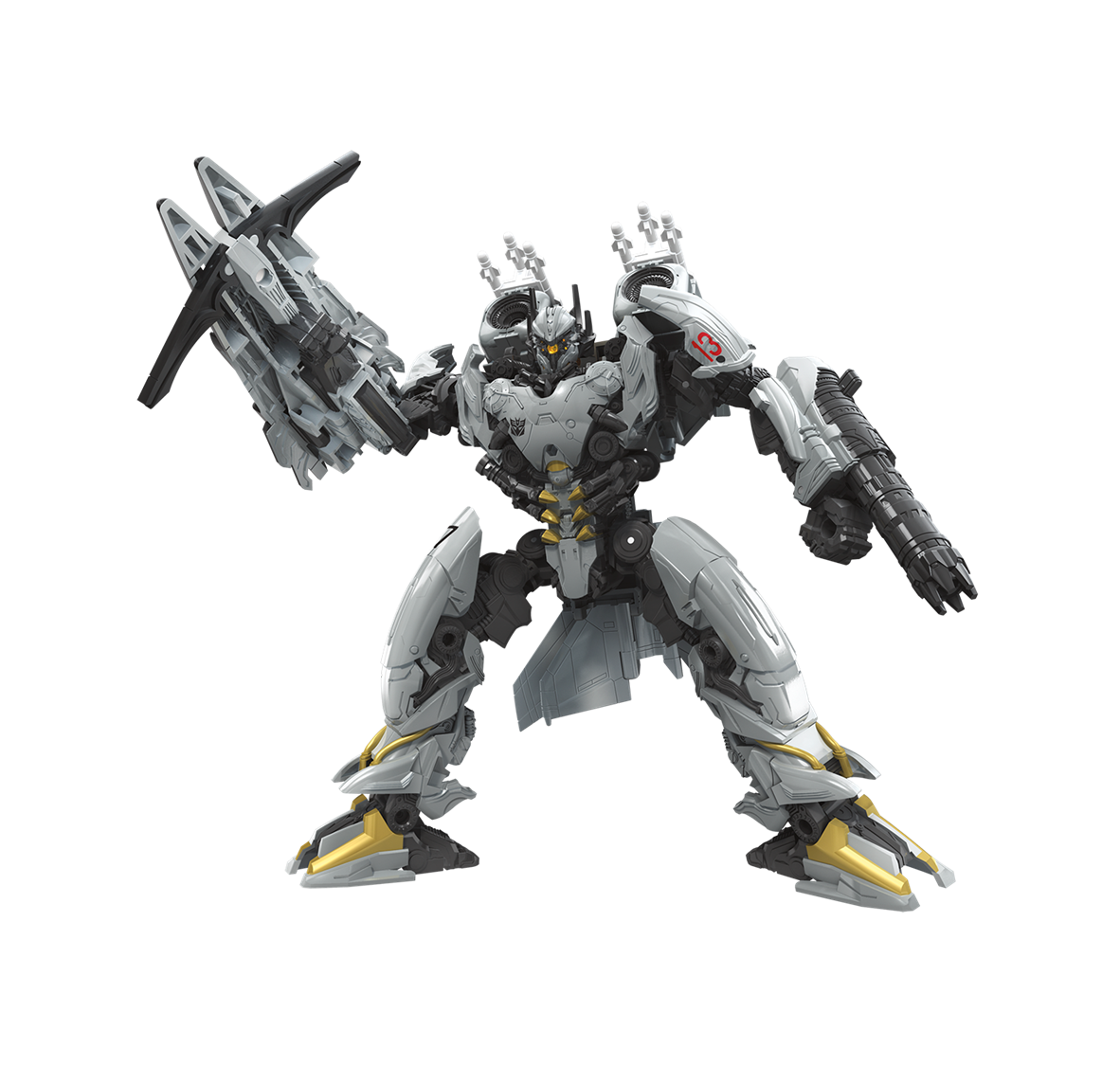 At some point, my head will get ripped off in the movie.

Dragonstorm and Nitro were part of the Hangout and we get into a discussion about how Dragonstorm looks like tons of fun. He's a Duocon, sort of. Nitro also looks great and his head can be removed and Cogman can take over his body! Is Nitro based on a real plane? We also don't forget about the Planet in the room! Cybertron Primus has been repainted and will be released as part of the Last Knight line. Scotty reports how the designers came up with the paint scheme. It's fantastic and cool. Ooh, boy, sticker shock though. Cybertron is expensive. 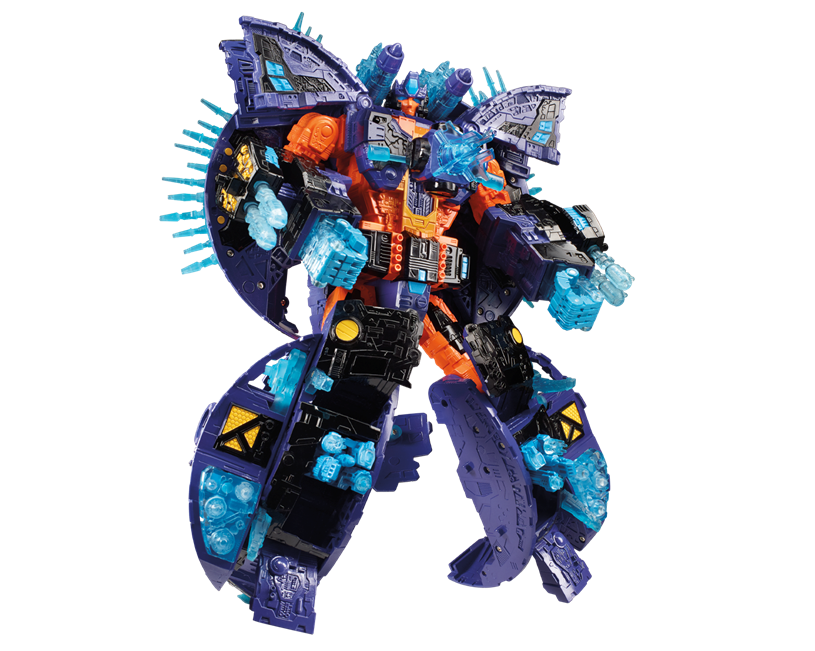 G2? I don't know what you're talking about

The toy talk ends, but we're still on the topic of The Last Knight. As the release date draws near, trailers and TV spots are dropping left and right. Have you been watching them? We talk about our thoughts on the newest clips we've seen and how it has changed our thoughts on the movie. Are the Transformers just pets to the humans? Have we seen this movie four times already? Check out some of the newest clips here and here

They've also release some case files that gives us a little info on the Decepticons of the Last Knight. Follow along as we go down the list discussing how each of them will die. 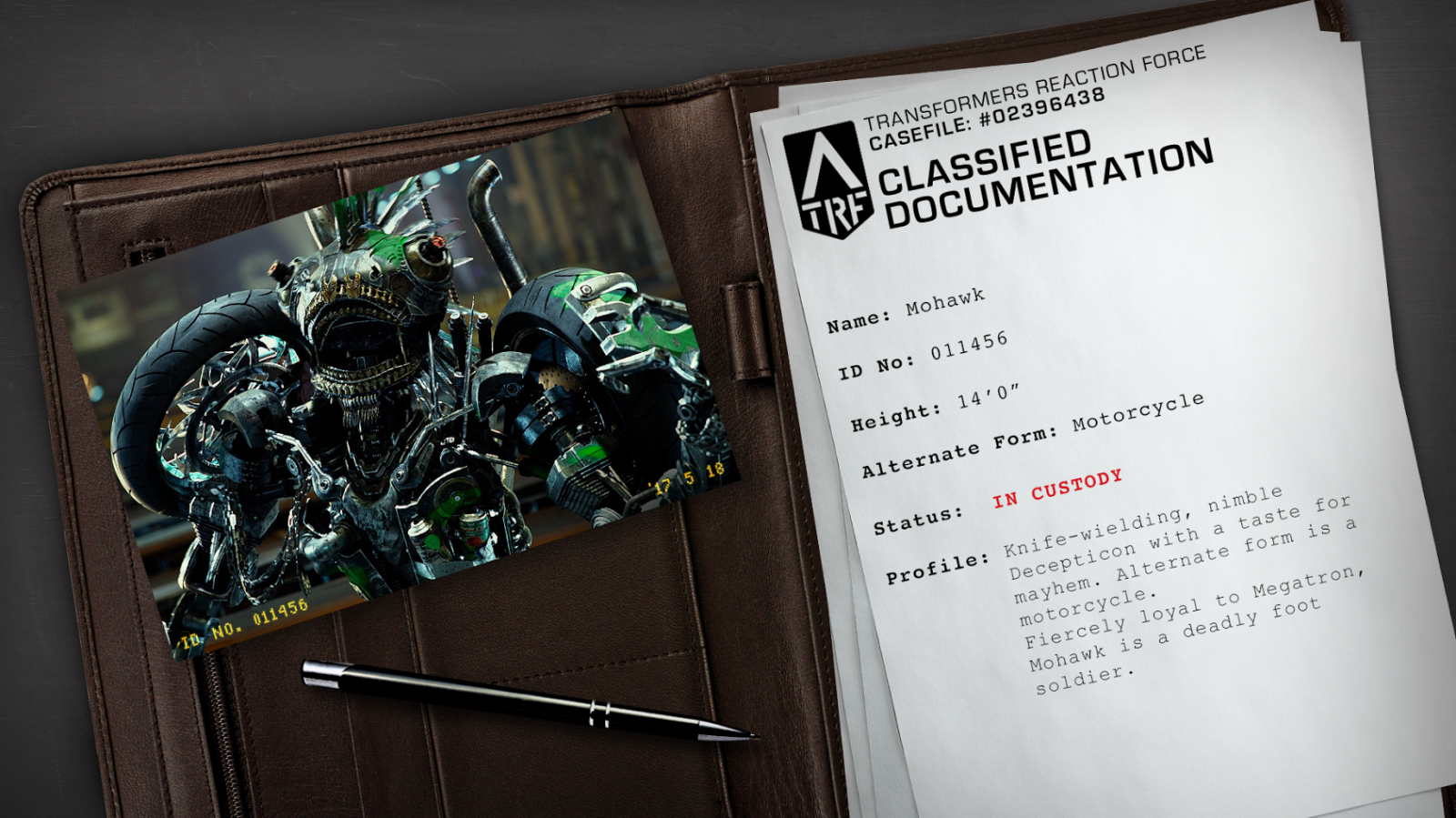 It's not easy being green.

We change gears and head into some comic talk. Transformers Till All Are One has been cancelled. We discuss our feelings on that topic and the various reasons why it was most likely cancelled. The series will end with Issue 12 and an Annual. Check out our review for issue 10 here. The book is great and it's a shame it's ending.

Starscream has been a highlight of this series.

Next we talk about the end of The Lost Light's first story arc. Check out our review of issue 6 here. It was a great ending to the first arc. What do you think? Did Megatron purposely missing the teleporter? Did Terminus mislead him? Did Roller? Has our intrepid band figured out the secret to creating new Cybertronians? 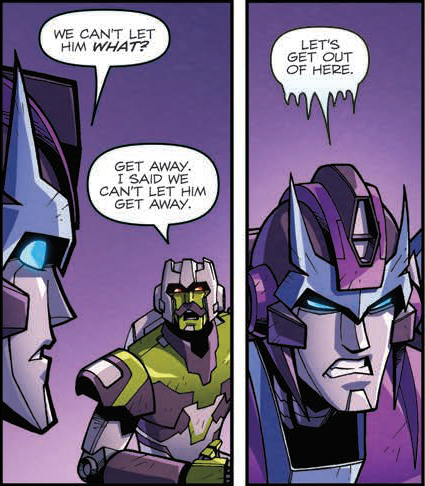 We conclude our episode with some Twincast Freestyle... that ends up being mainly bragging rights. Titans Return Wave 4 Deluxes! Masterpieces! But there's also some grumbling about Robots in Disguise Ultra Bee and Crash Combiners. They're not all they're cracked up to be. 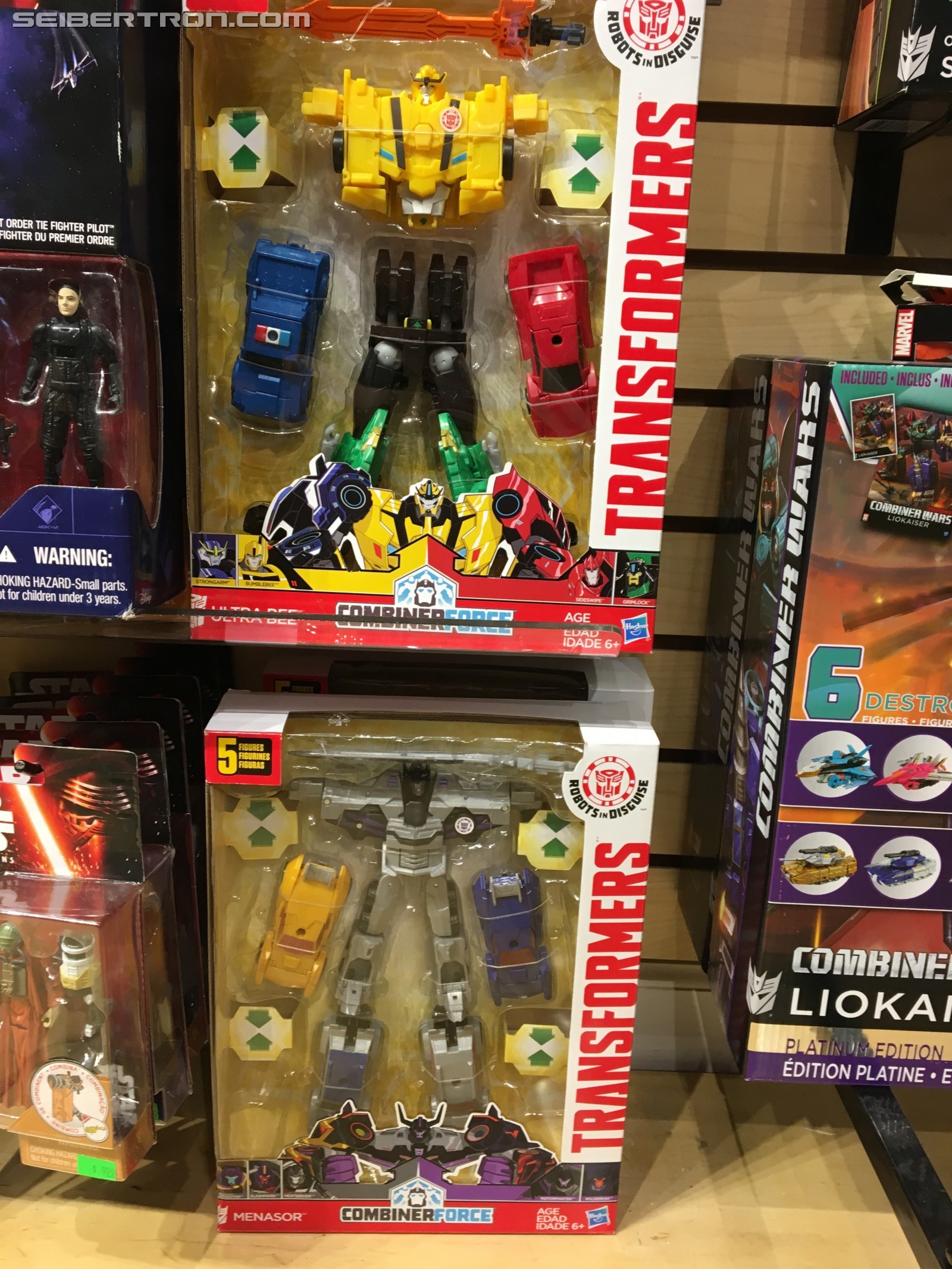 They don't love me.

That may have been a bit of a rough ride, so thanks for sticking it out! We'll be back in few weeks with our all Last Knight Review episode! Don't listen unless you see the movie! Or do! That's great too!

RodimusConvoy13 wrote:We now have images of Takara's Trypticon. What are the differences between this one and Hasbro's? We'll tell you. Yes we will. We will tell you. Ok, well, maybe we'll just guess and kind of... Look, it's Trypticon, ok. He's awesome no matter what company puts him out!

I LOL'ed at this.

Or wait for me to buy the LG one after weakly impulse buying the Hasbro one on sight :/

It's not weakness - it's the strength to bear two identical Trypticons!

Re: Twincast / Podcast Episode #176 "Moonbase Gray" (1889142)
Posted by ScottyP on June 13th, 2017 @ 12:22pm CDT
It's the Boulder Hill "Gas" sign's little brother! Haha I remember having that too but it was in bad shape. What I like most about it is how the fake NASCAR ad on it completely captures the feel of the Winston Cup/Busch Series ads of that era.

Edit: totally forgot about the Dusty Rhodes + Michael PS Hayes portmanteau it included. What a time.
Re: Twincast / Podcast Episode #176 "Moonbase Gray" (1889408)
Posted by Counterpunch on June 14th, 2017 @ 2:19pm CDT
There is literally no way to predict which or how many of a given figure I will buy any more.

I am no longer a guiding light of consistent philosophical consumerism driven by a pragmatic take on core story values.

Counterpunch wrote:There is literally no way to predict which or how many of a given figure I will buy any more. 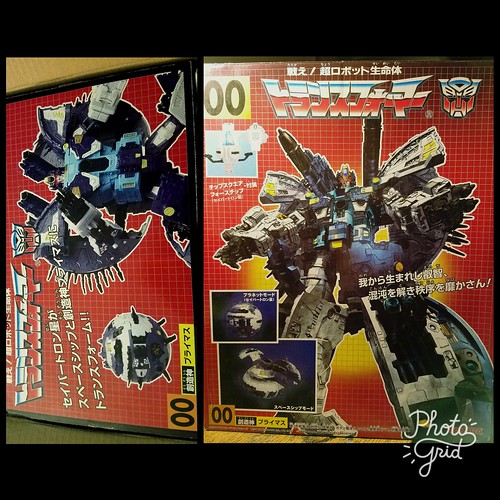 I was happy with its condition.
Double checked the contents, the interior liner took a beating in shipping from the UK, and carefully put him back in.
Trying to keep him MIB as long as possible.
Click here to view additional comments about this topic at the Energon Pub Forums ...