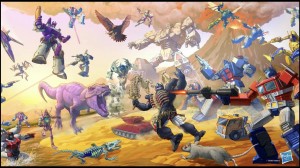 The Seibertron.com Twincast / Podcast is pulsing with excitement as your host ScottyP sits down with Mr. Starscream, Megatronus, xRotorstormx, and Seibertron himself to discuss the first ever PulseCon and all the amazing reveals.

Episode #260 “PulseCon 2020” is available directly and in our RSS Feed, and should appear on Apple Podcasts, Google Play, and Stitcher Radio within 24 to 48 hours of when you see this news post.

Arkbot art was a nice surprise in that art piece. Nothing Commander related, but cool to see a Titan tease. I kinda like the fact that the thrusters just become the entire front of the lower legs. And the Last Autobot head is a nice touch on top.

While rumor has it that Gears, Polar Claw, and that saber tooth fossilizer have been cut, I would still love to see the Polar Claw. That is one I want so badly to have a new toy!!!

Fossilizers are my new favorite original idea. I love it so much! Cannot wait to build a boney army.

Primal never used his mace in the show, I completely rewatched the series recently and would've remembered that!

The fact that the same guy that designed MP-43 also worked on his new Megatron is awesome. That toy looks so good and so sharp!

I fully agree with Ari, I feel perfectly OK with having my MPs of the Beasts I already own because the new Kingdom ones are all shooting for a completely different look. The realistic beast modes are awesome.

I actually like the way they went for the cheetor. form some reason I like the legs a lot.

Surprised Cheetor is one of the best things to happen in that panel, that was hilarious.

Vertebreak is pretty awesome, I love the dino mode. i think Vertebreak is the cooler of the 2 fossilizers so far.

Also, did you guys see what F.O.S.S.I.L stands for? I'll need to find it again, but the abbreviation is so hilarious.

I really hope Beasts stick around more, I want to see a new Silverbolt and Tigerhawk. If we could at least get maybe a wave a year sort of range I would be happy. Just keep them around some please!

The new Pulse requirement to make sure things don't sell out very quickly was very effective, I am very grateful for it!

Funny to hear you guys do that live, well done on that. I got the Pit of Judgement, Hades Megs, Breakdown/Vehicon, ML Silk, BS Armorer, and some of the stands. It was a great weekend.

clones were a decent reveal, glad others are getting them, but I am more than happy with mine that I have.

I didn't pre-order anything that's wider retail from Pulse. I usually see it or find it elsewhere before Pulse gets it in stock. I use Pulse for exclusives and some other things like Marvel Legends or Black Series that I do not see as often.

I did not even know there was a Plasma series Ecto-1 coming until this podcast, thanks guys! Target is sold out, but I will get that!!

I would have loved Final Battle Megatron. I want that one so bad. The Prime arm with Dark Star Saber is my dream Prime figure.

Paul: Megs reattaches his original arm after Prime cuts off the arm at the end of Season 2. That Prime arm was lost and never seen after Optimus cuts it off.

RED Arcee looks pretty dang good. I am excited to see her, and hopefully she is nice in hand. She is a definitive grab.

Earthrise trailer looked fairly boring again. I am excited for Doubledealer, but that's about it.

Seeing Coneheads from the tetrajet mold is surprising, but welcomed.