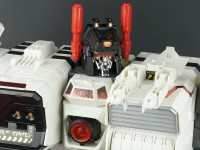 Note from Ryan: This episode was recorded on July 12th, almost a week before SDCC. The craziness and 16+ hour days of Comic-Con prevented this episode from being posted last week and earlier this week. Without further ado, here's Episode #71: "SDCC 2013 Preview" ...

"It's Summertime in northern Michigan..." and everywhere else, even though Kid Rock only cared about the latter, Ryan and Matt discuss vacations, trolls, and yoopers, and then the group gets SERIOUS! Join master of ceremonies Mike (Counterpunch), and the likes of Ryan (Seibertron), Matt (tigertracks 24), and guest-orator Scotty P (Scotty P)! Beat the summer heat and listen to these chaps talk Transformers as the Eve of Sand Diego Comic-Con is upon us.

You can download this episode directly, via our RSS Feed, and it should appear on iTunes within 24 to 48 hours of this news post.

This iteration of the Twincast talks about the Transformers exclusive toys that are to be available to purchase at SDCC and hopefully, on HASBRO TOY SHOP early next week. We focus mainly on the insanely shiny and gigantic Metroplex; but also talk about 'the pales in comparison, but still nice Shockwave's Lab'; and the "not even Action Masters" vinyl figures set. In case you missed it, Ryan also posted galleries here on Seibertron of all 3 exclusives, including quite a few comparison Metroplex pics between the SDCC Exclusive and the retail HASBRO release. The debate is on as to what version of versions YOU MUST OWN (or not, no pressure)!

You can also hear our thoughts on the Takara Tomy SENATOR RATBAT Generations toy, Toys R Us' Masterpiece Pre-order eBay Auction Oopsies, the newest toys like TT vs. HASBRO Hoist, TT vs. HASBRO Blitzwing and Springer, the new Construct-a-bots Blitzwing in-hand review by Scotty P, and much, much, more! Thanks as always for giving us a listen!

You should pitch your ideas to Hasbro direct, and maybe take over the club, fans know what they want

SDCC has more coverage and a bigger audience than Botcon,(has to be said), which is why, I suppose, that so much of the 'should have been a botcon reveal' happens at SDCC,

and yes, that slipstream head was an instant 'fail' on the what it was supposed to be. it's like she got into a lobbing contest, as the lob, maybe a reuse of the airachnid head would have worked better.

just after seeing pacific rim, andthe thought that came to mind was what a china centric element for TF4 could be like

as usual great show as always.
Re: Twincast / Podcast Episode #71 "SDCC 2013 Preview" (1506902)
Posted by noctorro on July 27th, 2013 @ 4:15am CDT
offtopic and might have been explained before but,
isn't there a simple way to have this on a website (like youtube)
instead of downloading it?
Re: Twincast / Podcast Episode #71 "SDCC 2013 Preview" (1507134)
Posted by xyl360 on July 28th, 2013 @ 2:19am CDT
I sort of agree with Mike on Ultra Mammoth. On my shelf, he will NOT be representing some oddball Beast Wars Ultra Magnus. It's the simple fact that I am an absolute obsessive FREAK when it comes to Beast Wars repaints combined with the fact that I LOVE that mold (I even have the black Lucky Draw in addition to the Nemesis version) that makes me want him so badly.

What's the difference? When you stream something, you ARE downloading it, you're simply listening to it as you're downloading (assuming it can buffer far enough ahead while listening/streaming so that you don't end up with it constantly stopping to buffer). Either way, you end up downloading the same amount of data in total if you listen to the whole thing.
Re: Twincast / Podcast Episode #71 "SDCC 2013 Preview" (1507376)
Posted by Sabrblade on July 28th, 2013 @ 10:05pm CDT
Count me in with those who think Henkei! Henkei! Dinobot to be the greatest Dinobot figure ever.

I keep hearing this, I guess I need to pick it up. That one, Telemocha, and the original JP one are the only Dinobots I don't have.

Of all the Dinobot toys there are, I own the (bone white) Transmetal 2, the Happy Meal Transmetal, the Fox Kids redeco, the Henkei! Henkei! toy, and the Telemocha toy.

Re: Twincast / Podcast Episode #71 "SDCC 2013 Preview" (1507889)
Posted by gothsaurus on July 30th, 2013 @ 3:44pm CDT
You guys mentioned some German comic stuff. I have some items I picked up years ago, including a compilation of issues #5-(?). I could whip up scans for posterity. I'm VERY much interested in getting scans of 1-4. I tried to track them down, even as reissues, but prices were crazy high.

I also have some pamphlets in German somewhere, too.

Obviously that Predacons Rising movie has been confirmed as a completely separate thing from the end of the series. Pretty cool.

Just a comment on how available things are at retail:

I think what most people are continuing to complain about is that if you shop brick and mortar exclusively...then it is insanely difficult to find new product.

Unless you have a flexible schedule or friends in the area most stores seem to get a single case of a new wave and then...nothing. For months.

Target in particular have had their action figure aisles in disrepair for over a month and still aren't scheduled for a hard reset until this weekend.

There really isn't a ton of stuff at brick and mortar retail if you take into consideration how abbbbbbsolutely terrible distribution and big box buying habits have been.

Also: Vangelus interviewed the Hasbro dudes at Botcon and they specifically stated that there are no plans to bring the Go! figures to the states.