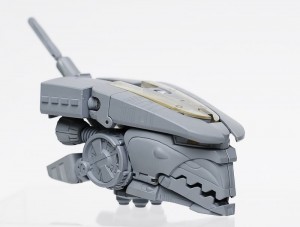 The Robotpoints blog gives a look at a rare Beast Machines Megatron Megabolt prototype. This figure was originally intended for the Beast Machines Battle for the Spark line. This figure differs from the one we finally got for the Robots In Disguise toy line. While being a completely different mold, the most noticeable difference is the lack of legs that the final toy sported. Instead, this prototype includes the original jet thrusters underneath.

Here is the Megatron Megabolt that came out of the Robots In Disguise line. 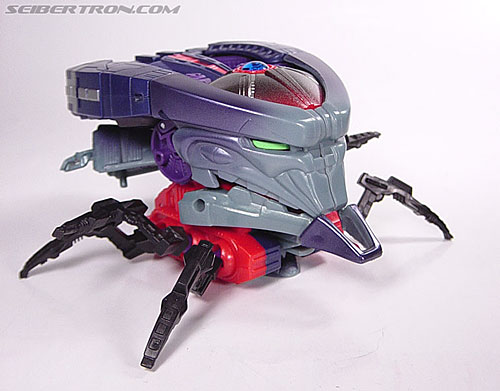 The basic idea is the same as the production model (in that they're both transforming head/space crafts), but is essentially a completely different toy. It's actually easier to note the similarities between the two designs. Basic shape and certain areas of transformation are akin, but like the cartoon; does not have the legs. Instead the original jet thrusters adorn the underside of the prototype. Interestingly though, the lower jaw of the production version more closely resembles the cartoon.

A comparison shot of the two toys.

Not to gloss over the below debut robot mode images but the most incredible feature of this concept is the working mechanism visible through the clear sections. When the eyebrow/chest section opens up, a series of cogs engage and actually move within the prototype giving a true mechanical effect.

For the full story behind this piece of Transformers history, check out the Robotpoints blog.

Seibertron Store: New Comics In-Stock including Transformers and more plus 20% off sale!

Which is a shame since since it looks like it could have been interesting to see.

This thing was reportedly seen very briefly in a slideshow at BotCon 2005.

The packaged Beast Machines version was also definitely seen in a slideshow at BotCon 2011.
Re: Unproduced Beast Machines Megatron Megabolt prototype (1518841)
Posted by Bumblevivisector on September 19th, 2013 @ 11:03pm CDT
Ah, the whatmightabeens! If only they could've all seen print in The Vault. Every once in a while, it's something SO great that I must dare risk possible offense by suggesting that a KO company should acquire it to share with the world.

But this time it's Beast Machines. So to Hell with "possible".

The only reason I wouldn't bother pissing on this thing's grave is that whatever forcibly injected all that organic glop into the previously all-technological Cybertron defiled it so thoroughly as to make the point moot.

I'd normally just keep that to myself, but a close friend's having a cyst drained, and it's giving me traumatic BM flashbacks. I had to vent this once. I'll accept any warnings forthcoming.

Still, increased focus on show-accuracy is always worthwhile, regardless of the show. I think the final product fell victim to a cheap trend of disembodied toy heads having spider legs. Mr. Freeze was like that not long before, right?

Anyone else think the jagged teeth on that shape of face gives this prototype's profile a resemblance to Mumm-Ra? A weird nod to Kid-Stuff read-along continuity? Yeah, given enough cosmic power, Mumm-Ra could've done the deed. The sonic canyons had something to scream about that day...blech.

Ah well. Too bad this was canned though, I'd have bought it.