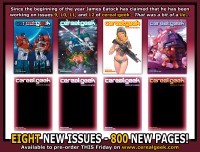 Our friends at He-man.org have unveiled new covers from upcoming issues of Cereal:Geek. These issues will be up for pre-order this Friday June 7 at Cereal:Geek.

cereal:geek is the new magazine from Busta Toons Productions that focuses strictly on animation from the eighties. On a quarterly basis this 100 PAGE glossy publication with NO ADVERTS features refreshing and enlightening articles, illustrations, scripts, storyboards, a wealth of unseen production materials from your favorite shows, and interviews with those individuals that helped shape this particular decade of animation history! Dungeons & Dragons, G.I. Joe, Galaxy High School, He-Man, Jem, M.A.S.K., The Real Ghostbusters, She-Ra, Teenage Mutant Ninja Turtles, ThunderCats and The Transformers are just some of the shows that appear in the first issue!

... but odd to hear about it at issue 9. Makes me wonder what I missed in issues 1-8... and if any had to do with Transformers.

Anyone been following from the start? Any indication of quality of photos/content from a scale of 1 (bad fanzine) to 10 (museum exhibition book). ???

Re: Upcoming Issues of Cereal:Geek Features Transformers Covers (1493205)
Posted by Bumblevivisector on June 6th, 2013 @ 2:55pm CDT
I bought issue #1 off ebay for almost $50 two or three years ago, but procrastinator that I am, I still haven't gotten around to reading all of it yet. The main article was on how violence was handled in '80s toons, and the cover featured a close-up of She-Ra's face, half black-and-blue. It also had an in depth article on that second He-Man cartoon from around 1990.

I'd guess there's some TF content in every issue, just not necessarily very much if it's strictly '80s and they try to cover the most obscure cartoons, including those that didn't leave behind any toys for us to remember them by. (Yes, that first issue did have Galaxy High stuff)

I'm so far behind on it, I'm actually surprised they're only up to #8.

Too bad $50 per issue is WAAaaaay over my budget. Getting caught up would cost like... $11,9999 milliondy dollars... or some other big math-number®.

("Math-number" is a registered trademark of the Liberal Artists Trying to Do Math Conglomerate. Patent Pending.)

My names is James Eatock and I'm the long suffering writer, editor, designer, and self-publisher of cereal:geek magazine!

I'll try to explain as much as I can about the magazine without waffling...

cereal:geek is a glossy magazine - 100 pages with no adverts whatsoever - It was always important to me that I produce something that is a quality product, rather than something that looks like it's been haphazardly put together - I wanted people to pick this magazine up physically and say, "This is pretty damn good!"

Inside the magazine there are regular features that both examine (in-depth) and praise the cartoons of the eighties - The articles in the second half of each issue are dictated by the theme - For example issue four (a GOOD jumping on point) is a horror-themed issue and has features on the horror-themed episodes of He-Man, Transformers ("Dark Awakening"), G.I. Joe, Inhumanoids, etc.

All the artwork and articles are exclusively created for the magazine - You can see plenty of page examples on my deviantART page (though I haven't updated it in a LONG time) - http://bustatoons.deviantart.com/gallery/24556403

And I assure you, there's a LOT of Transformers material in each and every issue - After all, I'm too much of a Generation One fan to not acknowledge it!

The website is up and running once again - You can always buy one of the 100 page PDF previews - I assure you though, issue four is the best jumping on point - The magazine had really found its "feet"...

Are you saying that you can download the full out of print versions as PDFs? (Your wording of "previews" had me confused.) If this isn't offered, I'd very much suggest doing so!

If that's not the case, where IS the best place to get the older issues — and start at issue 4 as you suggest?

I know a lot of us can't afford the $50 for a magazine on ebay currently. Would you consider some reprints of the earlier ones, or a collected book or such?
Re: Upcoming Issues of Cereal:Geek Features Transformers Covers (1495283)
Posted by Busta Toons on June 14th, 2013 @ 1:21pm CDT
Sadly, I did experiment with PDFs of back issues...and within the space of a week the file had been uploaded to newsgroups - That kind of put me off offering digital versions of the magazine - The two SAME/AS PDFs for sale on the website feature random content taken from the first four issues - It's a good way to get a taste of what the magazine is all about!

I assure you, when you physically hold a copy of the magazine you'll see what a quality product it is - And trust me, I hate saying stuff like that because I am the world's worst pimp of my own product...

You can order back issues of the magazines directly from the cereal:geek website, or stores like Graham Crackers Comics and Orbital Comics stock the magazine, and both currently have the now out-of-print copies of issue five...

I've considered a collected book of the first four issues - But right now I'm focusing on the next eight issues!

Thanks for the reply — and where you can still get the back issues.

Is there any way to view the table of contents for each issue? (Or a list of featured subjects?) If there are issues which HEAVILY feature Transformers, I'd definitely be more apt to get those first.

Given, it sounds like each one hits on them a bit, so I'll probably eventually try to pick up the set.

BUT — Do please consider collected sets of four... (and continuing with 5-8 as well (eventually) since the 5th is currently sold out on your site.)

gothsaurus wrote:Is there any way to view the table of contents for each issue? (Or a list of featured subjects?) If there are issues which HEAVILY feature Transformers, I'd definitely be more apt to get those first.

With regards to Transformers content, every issue contains at least some Transformers (I wouldn't have it any other way) - But of the issues available I'd recommend issue five (which can be picked up on certain websites), and issues six and seven (which you can still pick up from the website)...

Dead Metal wrote:This still exists?
Didn't this go under like 3 years ago?

Well, the downside of self-publishing is that when life gets in the way the magazine becomes the last thing on my mind - But, to answer your question, YES it still exists!

Re: Upcoming Issues of Cereal:Geek Features Transformers Covers (1499932)
Posted by gothsaurus on July 1st, 2013 @ 4:08pm CDT
What about the ones "unavailable"... any of those have a bulk of articles on TRansformers? Trying to put together a priority list. Heh.

gothsaurus wrote:What about the ones "unavailable"... any of those have a bulk of articles on TRansformers? Trying to put together a priority list. Heh.

Here's a brief rundown - As I've said before, there are numerous little articles and features throughout each issue (alongside the lengthy articles), and many of those often relate to the Robots in Disguise...

* Issue two has numerous Transformers articles in, and you can pre-order that issue here - http://www.cerealgeek.com/issue_02.html

* Issue three has an article about Transformers: The Movie

Also, I should mention that issue four (which is still available) has a great article about "Dark Awakening" with a fantastic illustration of the "zombie" Optimus Prime...