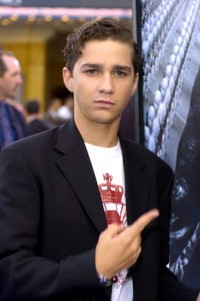 The team over at Access was able to recently interview Shia Labeouf. Shia talks about Transformers 3, and his motivation behind trying to make it the "best action movie ever made", and the "best Transformers movie ever". Check out the video interview below!

He really takes his job seriously and he WANTS to. He's mature and passionate about HIS/THEIR work. Seems to me that maybe Shia should be the one in charge of making these TransFormers movies, not Bay.

He really wants this to happen. The best TransFormers movie ever. I hope he can make it happen, even though he has arrogant Bay dragging him and everyone else through crap.

BTW Blurrz, why do you always have the best signatures.


.
Re: Video Interview - Labeouf on Transformers 3 (1074818)
Posted by Swiftknife24 on May 15th, 2010 @ 6:07pm CDT
You know, he may seem embarrassing in the films, but at least he knows what he's doing (even in the first film he thought some of the things were silly) and at least he has passion and ambition.

Hopefully Sam has matured enough to be at the same level as Shia! He's confident about the writing? I would be, too; Ehren Kruger seems a lot more competent on his own, rather than with those two silly-buggers who wrote the first two (I mean how do you come up with plot-hole filled stories for one sci-fi franchise and then suddenly come up with a damn-good reboot for another?!) Anyway back to Kruger; I'm sure that with his horror-writing background, he can come up with the darker film we're being told we'll have (i.e. targeting humans; please target Mikaela, please target Mikaela...

Muahahahaha!) So, that and including the acting talent that has been brought for the film...Yep, I'm Optimus-tic about it!

Swiftknife24 wrote:(But please, for the love of Primus, do not come up with an 'of the' title!)

Transformers: Lord of the Dance.

ConBotFormer wrote:I'm starting to have much more respect for Shia Labeouf.

He really takes his job seriously and he WANTS to. He's mature and passionate about HIS/THEIR work.

agreed,thou I will back Bay up,hes not the sharpest tool in the shed,but he's one of the strongest,there aren't many who can pull off what Bay can pull off,and at the very least Spielberg agrees,
and as good as the new star trek movie was,I have a feeling Gene Roddenberry is turning in his grave over the entire concept of the movie,it wasnt about space or the final frontier,galactic exploration or humanitarian aid,it was about ego,threw and threw,and that's what killed it for me.
Re: Video Interview - Labeouf on Transformers 3 (1074869)
Posted by vectorA3 on May 15th, 2010 @ 10:46pm CDT
where was that shot at? A hotel, no doubt, but where? In the US? Florida? Or on the french riviera perhaps? Or Australia?
Re: Video Interview - Labeouf on Transformers 3 (1074889)
Posted by First-Aid on May 16th, 2010 @ 12:03am CDT
COuple notes...

First off, as someone who has worked in rehabilitation before and is familiar with the type of injury he had, I am simply AMAZED at the progress he has made with his hand! Full range of motion at the very least- I can't say how sensation and strength are, but the fact that he can make a fist is remarkable.

Second, the guy comes off as being "pissed off", but in reality I believe he is just a very high strung, high energy individual. He also seems very candid there. I like that. I've seen a lot of people bash him for TF movies, but I just can't do it. It may be an act, but it's a convincing one if it is: the guy seems genuinely concerned about making quality movies. Good for him.
Re: Video Interview - Labeouf on Transformers 3 (1074895)
Posted by Blurrz on May 16th, 2010 @ 1:24am CDT
I really like Shia's fiery determination.

I guess I've got a knack for it

Swiftknife24 wrote:(But please, for the love of Primus, do not come up with an 'of the' title!)

Transformers: Lord of the Dance.

Transformers: March of the Penguins (YES!!!!).

Okay, those I will accept!

(Especially the second one!)

DavidT wrote:Is it just me or does Shia seem pissed in this interview LOL

Yeah, i noticed it too. I think he was more antsy over something, like he really, REALLY needa smoke or somethin. He was also repeating every answer he gave at least twice. Hes gotta be on drugs.
Re: Video Interview - Labeouf on Transformers 3 (1075069)
Posted by Joshua Vallse on May 16th, 2010 @ 5:25pm CDT
He does strike me as very high strung, but then again working with Bay can do that to you. I mean his first experience on set Bay set loose a pair of attack dogs on him, attack dogs the handelers failed to restrain and Shia was in fact running for his very life.

I think he's justifiably anxious being he goes through alot in these films, and being so he expects the very best from everyone else to make these films worth while being, ya kinda want that when ya nearly die every odd day and such. After seeing ROTF himself, Shia is understandably not happy with what it ended up as, especially considering all that he and the other actors are put through. So i think what goes through his mind while he's speaking is around the lines of,

Honestly, I'm surprised he and all the other actors didn't ask for a pay raise in light of Paramounts demand for such a soon turnround.
Click here to view additional comments about this topic at the Energon Pub Forums ...