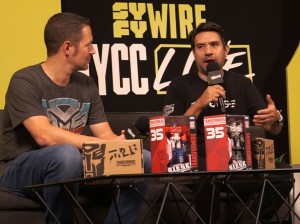 For your viewing pleasure, Seibertron.com was onsite at New York Comic-Con to record video of the SYFY Live Stream of Hasbro's Transformers brand panel. During their live stream, Hasbro officially unveiled Transformers War for Cybertron Earthrise Voyager Class Starscream, teased Titan Class Scorponok and Lord Zarak, showed off 35th Anniversary Optimus Prime and Megatron, as well as Generations Selects Cybertron Defense Hot Shot and Powerdasher Cromar. In addition, they talked the massive Planet Class UNICRON. Check out the pics in this gallery and our video on our YouTube channel below.


You can also view our full gallery from the Live Stream panel in our NYCC 2019 event gallery below. 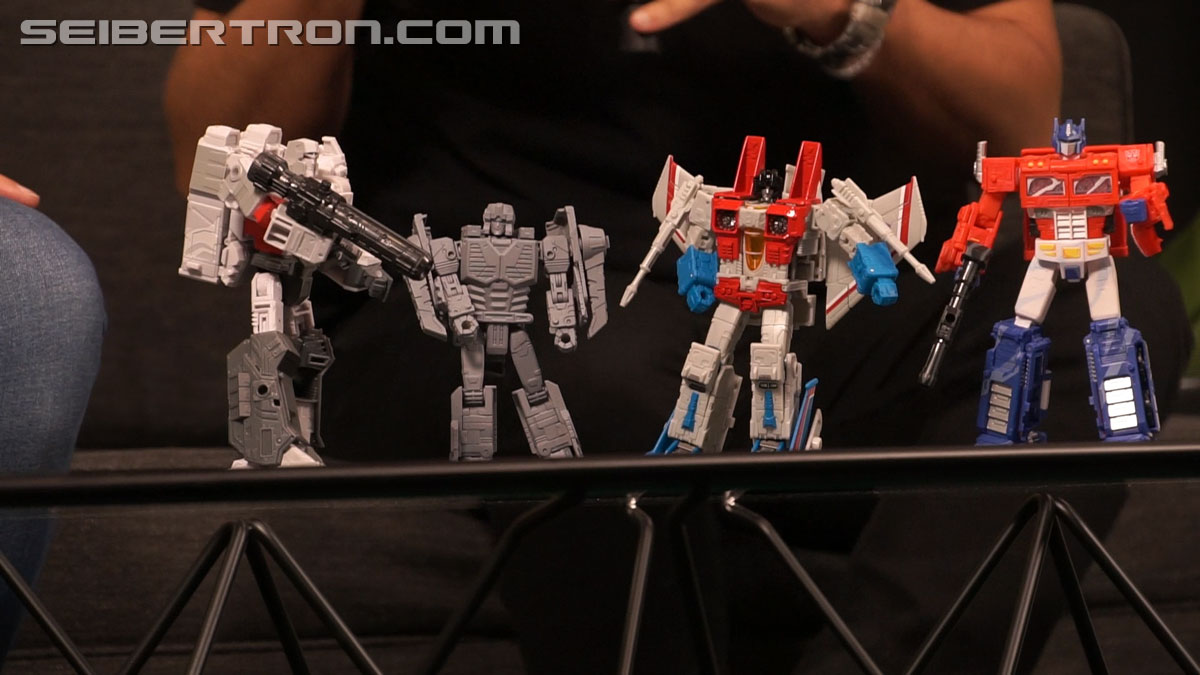 I don't care about the other rehashes from previous lines, the Final City Bot is almost here...

Re: Video of the Hasbro Transformers brand NYCC Live Stream panel #HasbroPulseNYCC #NYCC #NYCC2019 (2041038)
Posted by partholon on October 7th, 2019 @ 2:45am CDT
Scorponok will probably be the first city bot I won't get, mainly due to the fact I have the original and didn't have the others.

Still zarak looks lovely and nice to see they've done a cerebros on him (he's got a titan master head). It makes sense considering the others lads all do too in one form or another.

Getting VERY tempted by that unicron too. But man that's some hit to the wallet.

With all the originals done it makes me wonder what now for the class. Methinks we could get a massively upgraded certain phase sixer (overlord) or seeing as they're Doin bot mode micromaster bases a proper countdown.
Re: Video of the Hasbro Transformers brand NYCC Live Stream panel #HasbroPulseNYCC #NYCC #NYCC2019 (2041086)
Posted by AllNewSuperRobot on October 7th, 2019 @ 1:05pm CDT
I was talking to someone about these reveals and they were most excited for Hot Shot. They said it was "really cool to get something that wasn't G1 for a change". I wonder how many TF fans from the 35 years of various iterations of Transformers, feel the same way?

As I've said before, if HasTak really want to see if the Post-G1 fanbase is out there, release MP Demolisher or Hot Shot. Just to test the water. To see how receptive they are. I think the popularity of the Beast Wars MP line has shown not everyone wants endless homage to the first three years of the franchise. An era most fans of the past twenty years will have no association with.
Re: Video of the Hasbro Transformers brand NYCC Live Stream panel #HasbroPulseNYCC #NYCC #NYCC2019 (2041090)
Posted by ScottyP on October 7th, 2019 @ 2:46pm CDT
^Armada Hot Shot is screaming for an MP. History has taught us the Deluxe Class cannot contain his kid appeal, er, shoulders.

Scorponok got me thinking about other not-yet-done Headmasters. I figure Snapdragon's a given and just a matter of time, leaving just the Headmaster Juniors. Then it gets me thinking about Masterforce and how many Powermasters already have updates. New Slapdash (looking at that Siege Mirage with a new head and some minor retooling), Joyride/Ranger, maybe a Doubledealer and those are handled as well under the recent Generations lines. Earthrise would be a good time for that, gets humans involved in its "story" in a fun way that we haven't seen 40 times already.