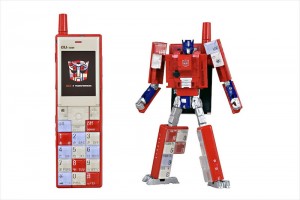 Thanks to a heads up from Seibertronian Terrsolpix, we now have a new video review of the au x Transformers Mobile Phone Optimus Prime, or a bit more simply, Infobar Optimus Prime. As you may remember, these Infobar figures were revealed a good ways back, almost a year ago now, and back in February we posted a story about what these figures are and what they do. Basically, the Infobar is based on a popular phone type in Japan, and these phones were designed to Transform into Optimus Prime, Megatron, and Bumblebee, not unlike that San Diego Comic Con Soundwave that turned into a tablet.

In the video review found below, reviewer Tef Tef takes a good long look at the figure, which includes the ability to hook up to your mobile device and make the alert sounds for your device. It also contains LED lights to go with the notification sounds. The figure also comes with a funny little phone accessory, making this thing even more goofy.

Check out the video review below, and let us know what you think of it in the comments section below!

Rated X wrote:Who would collect these and why? Are they working cell phones? They remind me of those dumb phones with big buttons for elderly people.

Why would anyone collect G1 Soundwave, Ravage and Laserbeak when they're not working devices? G1 Reflector, G1 Megatron, Real Gears, Mi Pad Soundwave, Sega Megatron, Playstation Optimus, etc.
They are scaled down from real INFOBAR mobile phones. However, they are functional as notification devices paired with an actual phone. Same as with the Pebble smartwatch. 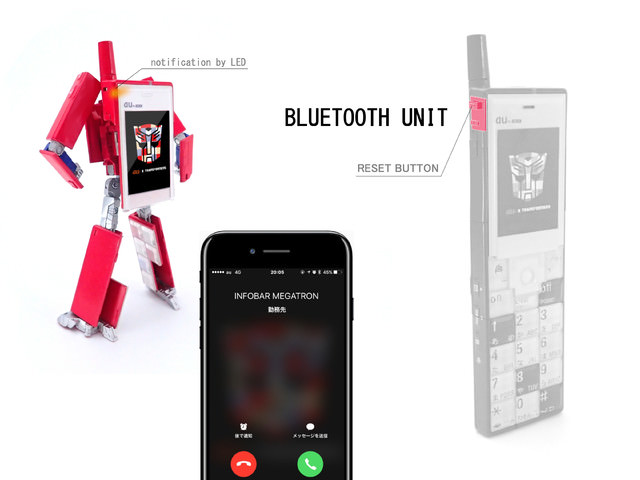 You didnt answer my question if these things actually work or not. Its kind of hard to compare a cheap childs play toy from 1984 to an expensive 2017 homage toy geared towards adult collectors. With that being said, find me one adult that feels the need to carry around a transformable working cell phone? Or if your argument would be that these are "play phones" meant for kids, please try to explain the adult collector price...

Yes, I did. It's quoted in your reply.
(Not liking the answer is not the same thing.)
On the other hand, you didn't answer any of mine.
Re: Video Review for au x Transformers Mobile Phone Optimus Prime (1929394)
Posted by primalxconvoy on January 3rd, 2018 @ 9:33am CST
These toys were created in partnership with AU, one of the big three Japanese phone carriers (Alongside Docomo and Softbank). In Japan, for most of the locals, the phones are simply known as a (Carrier Name) + phone/model name". In some cases, the name is replaced with a made-up model number, so a Samsung Galaxy Note 1 might be something like a "Docomo Galaxy v34567". Furthermore, some of the carriers, in the good old days of feature-phones, had special handsets designed just for them (or had exclusivity rights to certain handsets). The "Infobar" was one for AU.

It was seen as a rather different looking phone at the time, with clunky buttons and mosaic design. Recently, AU wanted to celebrate the design (or some design awards did) and so it went into partnership with Takara to make some TFs, much in the same way we've have tablet Soundwave, that Chevolet bot for DOTM, etc.

I doubt they will be available at BBTS. Ebay or Yahoo! Auctions Japan are probably more likely to have them.