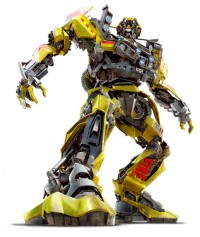 Kapowtoys have posted a new video on their youtube channel, a review of the new Dark of the Moon Deluxe Mechtech Ratchet figure. You can see the video by clicking here or right here on seibertron.com.

calling the mechtech weapon beautiful... i don't think so.
hasbro never has a problem with sculpting.
takara never really adds details to main line movie figures. there are special editions like buster and the mpm line, and as in the case with demolishor and rampage the entire scheme is completely different. so i really don't see takara adding any extra paint to this figure.
really could've done without the music/sped up transformation. i always thought transformers reviews were more of a three step process.. alt mode, transformation, robot mode.. after all they are transformers.
0kay.. enough of my bitching.

this figure is no better and no worse than the other ratchets we've seen. the shoulders are terribly atrocious, the legs look horrible.. they remind me of movie one deluxe barricade.

oh well. one deluxe ratchet is enough. this should've been a voyager. a new voyager mold would've been nice. i really wish they tried to make their scaling a bit more accurate. like we see crankcase and ironhide fight, well, we're getting a new voyager ironhide.. but only a deluxe crankcase.. or like movie one, we get a leader/voyager prime.. yet we get a small deluxe bonecrusher.

oh well. it looks okay. it definitely doesn't look like anything special, and it'll probably clog the shelves like i assume skids and mudflap will.
Re: Video Review of DOTM Deluxe Ratchet (1194627)
Posted by LiKwid on March 14th, 2011 @ 1:03am CDT
This is the reason I rely on Peaugh for my Figure reviews..This guy sounds like he's dating ratchet..So they remolded a shelfwarmer to be a.......shelfwarmer....~waits for the inevtiable rescue repaint~
Re: Video Review of DOTM Deluxe Ratchet (1194993)
Posted by Pr1meSuspect on March 14th, 2011 @ 7:46pm CDT
I do like this guy quite a bit. He is not too chunky, not to skinny to be Ratchet and I think his proportions are quite nice and accurate to the movie. The back kibble is meh, and the mechtech is dumb, and hilariously bad, but what're you gonna do? I passed on the voyager for obvious reasons, and the older deluxes never showed up to my area so now I'm gonna get me a Ratchet! Only took me 3 movies.