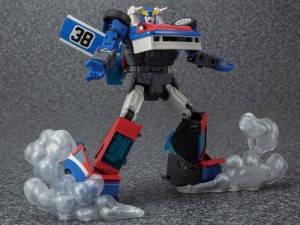 Fellow Seibertronian PrimevsPrime has been busy with video reviews. Not only does he have a review up for the new Earthrise Wheeljack but he also took time to make a video review of Takara Tomy Transformers Masterpiece MP-19+ Smokescreen. This rerelease is made with a more cartoon accurate look, including a new face. He goes through all the accessories and changes in the video below.

I just uploaded a review of the Mp19+ Smokescreen and showcased some of its updates from the original release.

Under the supervision of Nissan, this Masterpiece Smokescreen features a realistic vehicle mode, colored to match his appearance in the animated series. The updated head sculpt recreates the shape featured in the series as well. Smokescreen comes with interchangeable facial expressions along with smoke effects, jamming launchers, and disruptor rifle.

Armada Smokescreen would make a cool toy too.

VioMeTriX wrote:Armada masterpiece won't happen, 90% of the designs were not real vehicles or animals...Takara is not going to make masterpiece figures out of such low budget toys with no real nostalgic value. 90% of armada were like cheap dollar store knock offs.

I think you are wrong here. The children who grew up with the Unicron Trilogy are not yet at the age were disposable income is a thing. There are close, though, and in the next ten years or so, I think you'll start seeing a rather large uptick in Armada nostalgia.