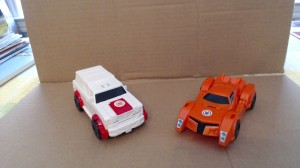 Seibertronians, quickly after they were sighted for the first time at US retail, our friend and fellow Seibertronian, ChuckDawg1999 brings us a video review for Robots in Disguise One-Step Ratchet and Bisk! Check out his thoughts and the video itself down below!

It's nice to know that even in 2016 collectors can still be surprised. No one knew that Ratchet would be getting a One-Step figure until it showed up on some etailer websites. Ratchet is a retool of the previously released Weaponizer Strongarm so it's a solid mold, but it suffers from balance issues when you try to have it hold a Minicon. Bisk is an all new mold and is the best version of Bisk we've gotten thus far. Unfortunately Bisk has no easily identifiable way to hold a weapon Minicon, if it's meant to at all. Overall these are fine additions to the RID line and make for great desk toys.


Make sure to check out Seibertron's galleries of the other toys in the Robots in Disguise line here, and leave your thoughts in the comments! How do you feel about another one of the main 5 from Transformers: Prime crossing over into the Robots in Disguise show? What do you think about the figures themselves? Have the one-steps gotten better or worse since the Age of Extinction days?

And, as always, keep your optics and audio sensors tuned to Seibertron.com for the greatest Transformers news (and reviews!) on the net!