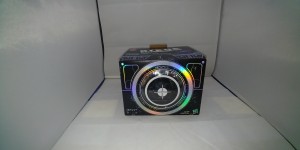 Might as well smile for the camera, because Refraktor is watching! Thanks to fellow Seibertronian Chuckdawg1999 we have a video review for the new Transformers War for Cybertron Siege Refraktor Reconnaissance Team 3 pack! Chuck has broken this into two parts for our viewing preference, the first part being a straight up review of the new 3 pack and the second being a focus on the comparison between the new 3 pack and the regular retail release of Refraktor.

From Chuck:
"Refraktor was one of the surprises from the Siege line when it/they were first announced. Once the blacklight images were revealed on the packaging rumors started of some sort of set that would include three figures plus some extra parts to complete the camera look. Well, if HasCon 2019 had happened this Reconnaissance set would've been one of the exclusives. Featuring three of the Refraktor molds done up in the original G1 toy colors with an extra flash, camera grip, and housing to better complete the camera look. It's a cool set and an easy way to get all three members of the team in one shot."

Enjoy the views and share your thoughts in the forum. As always stay tuned to Seibertron for the ultimate in Transformers news!