Video Reviews for Simpler Figures from Cyberverse and Bumblebee Lines with Dropkick, Soundwave, and More 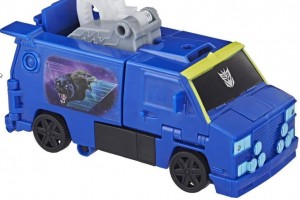 The two Transformers toylines filled with figures for a younger audience, Cyberverse and Bumblebee, get very little love from reviewers. That's why even though several of the toys below may already be out, no one has reviewed them. However, these may be toys that warrant a review since they are the more divissive ones. There was quite a bit of interest in the Bumblebee Soundwave toy and now you can see if this toy is worth adding to your collection. Below are the reviews from fellow Seibertronian Chuckdawg for:

chuckdawg1999 wrote:This is a figure that a lot of people were looking for when it was revealed, even people who don't usually enjoy simplified figures. This version of Soundwave is a tribute of sorts to a certain style and period during the 1980s. Turn up the melodic rock and enjoy this great toy.


chuckdawg1999 wrote:With Ultimate Class Bumblebee there are now Bees at every price point and size, sorta like a fast food menu. While there's a chunk to the figure, the thin plastic makes me feel concerned over time that the toy won't be able to hold up to normal play. Transformation is surprisingly involved but again the thin plastic brings me concern. Overall, I think there are better options to get your Bumblebee fix in this line.


chuckdawg1999 wrote:Bumblebee is, unfortunately, the weakest figure of this wave, which is a shame since the character is the main focus of the show. Bumblebee uses the newer side rotation transformation which was first seen on TLK One-Step Drift I believe. While a fun transformation it does result in the car kibble almost forming a cape of sorts around the figure. This can be an easy pass as there's plenty of other options for Bumblebee in the line.


chuckdawg1999 wrote:Nitro Class Dropkick is one of the best figures I've handled thus far in 2019. It's chunky and all the parts come together solidly in both modes making for a pleasurable transformation back and forth. I can't recommend this figure enough, but I also know many of you will pass on it just because it's been labeled a simplified figure.


chuckdawg1999 wrote:With Ultra Class Optimus Prime there is now at least one Prime for every price point in the Cyberverse line, with more to come. It's not the best figure but it's not bad either, it's just there. My one major complaint is that the legs activate the action feature, which results in a very long cab if the shield isn't deployed. I can't give a solid yay or nay on this figure so the decision on purchasing is up to you.

Re: Video Reviews for Simpler Figures from Cyberverse and Bumblebee Lines with Dropkick, Soundwave, and More (2012682)
Posted by chuckdawg1999 on February 27th, 2019 @ 9:52pm CST
A family illness put a pause on things but I have Ironhide coming tomorrow. I think I might have to adjust my opinions on the Power+ line.