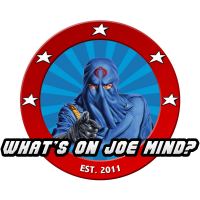 As many of you probably already know, your fellow Seibertron.com member Chuckdawg1999 also hosts the G.I.Joe focused podcast, "What's on Joe Mind?". He dropped by to let us know about a couple of recent episodes that will likely be of interest to us Transformers fans as well. Episode 47 features legendary Transformers writer and editor Flint Dille! In episode 48 we hear from the voice of Transformers Prime's Bulkhead, Keven Michael Richardson. Further details and links below:

YES! This IS episode 47 despite Gary calling it 48 in the opening - d'oh! Oh well, it couldn't be edited out to sound seamless, so we'll run with it. Yeah, it was a matter of time before that happened. Welcome to Episode 47 folks! You won't want to miss this one for TWO name alone. No, not Justin and Mike, try Flint Dille AND Larry Hama! They both join us as guests ON THE SAME SHOW. Yeah folks, no kidding! First up is Flint who talks about a wide range of his previous work and its not all Joe and Robot talk either. Visionaries, Inhumanoids and even Buck Rogers take up some significant talk time. Hopefully, if you are like us, you found what he had to say truly fascinating and chalk full of information. IMMEDIATELY following Flint, we are joined by Operation Red Retrieval Director Mark Cheng who brought along 2 special guests to make an exclusive announcement on WOJM. Joining Mark was the actor who played Beach Head in Operation Red Retreval, Joe Barbagallo and GI Joe writing legend Larry Hama. What are they announcing? What could Mark and Larry possibly be up to? Well, listen and find out! In the news, the GIJCC launches a new secure website, Retaliation figures begin to appear on eBay via China and a new Joe/Robot trade is set for a September release. Now, you may also be asking yourself, "Self, where is the Kevin Michael Richardson interview?" Well, with this episode being so packed, we decided to push back the interview another week or so so that we may focus all of our attention on the guests who joined us this week. You WILL hear the KMR interview in its entirety very very soon. Until then, sit back and enjoy Episode 48....er, I mean 47 of WOJM!!

It's finally here! It's our Kevin Michael Richardson epic interview episode! But before we get to the man who did the Renegades voice of Roadblock, we had another Kevin join us, Kevin Watts. You may remember Kevin from previous episodes and he holds the show record for being bleeped 44 times in less than 70 seconds back in Episode 38! This time Kevin joins us to talk about his new custom HISS Tank project for this Spring's New Jersey Collectors' Convention. After talking with Kevin, we go into the mailbag to discuss a letter from a listener asking our take on the prices of some of the more popular Pursuit of Cobra figures that were released late into the line and why they are so expensive on the secondary markets. Just before the intermission, the team discusses in great detail the upcoming 3rd party product ban by Fun Publications at BotCon and how it may possibly affect us at JoeCon in June. After the break, stay with us for the next hour as the we air our interview with Kevin Michael Richardson. Following the interview, Chuck sits in for Mike and tries to do his best impression of Ted Baxter and tries to take us through the news, which include coverage of a new fan-made video game, updates about the fanfilm GI Joe: Initiate, first looks/reaction to Retaliation toy packaging, Sears availability and updated movie PR stills....whew, that was a ton to talk about. As a side note to the listener, we tried our best to censor as many of the foul laungage in this episode. Hopefully we caught everything. If we didn't, we apologize in advance. As you can tell from the KMR interview and the ending with Mr. Watts, we had our hands full with editing! Other than that, we know you will enjoy this one! Have fun!