Writers Bob Budiansky and Bryce Malek on Creating the Transformers 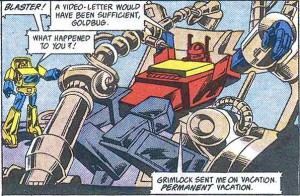 After last month's appearance in UK news outlet The Guardian of the Transformers comics, in their current IDW incarnation ('Kiss me Chromedome' if you missed it), we have another article and interview - with comics writer Bob Budiansky and animated series writer Bryce Malek!

While a lot of the material is most likely not new - board admin Burn, who notified us, remembers seeing most of it previously - the fact that the Transformers are in mainstream news coverage once more is worth celebrating enough, especially as we lead into a Paramount movie year and this has little to with it at all, being about the origins of the franchise's fiction. Check out some snippets below, and the whole piece here!

A lot of the names came from my own experiences of pop culture. Ratchet, a medical robot, was inspired by Nurse Ratched from the film One Flew Over the Cuckoo’s Nest. Ironhide came from the old TV show Ironside. I was trying to humanise them, give them relatable qualities, such as “this guy likes jazz”. People ask how I came up with so many personalities in a weekend, but at Marvel we were creating new characters every day. That was the job.

One name I’m proud of is Megatron. Back in 1983, the threat of nuclear war felt very real – and destructive force was talked about in megatons. At first, Hasbro rejected it for sounding too scary. Gently I said to them: “Well, he’s the main bad guy. He’s supposed to be scary.” Luckily, they changed their minds.

Some writers pitched really inappropriate stuff for a kids’ show, such as the Transformers meeting space prostitutes. Oddly enough, no one ever provided us with any of the toys – we worked from photocopies of designs. I actually went out and bought a few but I never got Optimus Prime. He was too popular. You could never find one.

Finally he got to me. I’d only been at Marvel for six months and said: “Sure, I’ll give it a try.”

Wow! The new kid on the block got the cool job!

The franchise became so popular, they kept introducing new toys. It was a real challenge working out ways to bring in 15 or 20 new characters at a time. I tried to make each one unique, but after about 250, I was struggling. By the time I’d done 50 issues of the comic, I was pretty burned out.

Sounds about right, what with Issue #50 being a slaughterfest to clear out the old product and make room for the more recent characters.

Some writers pitched really inappropriate stuff for a kids’ show, such as the Transformers meeting space prostitutes.

So glad that didn't happen.

I really wanted to emphasise the human characters in the show, to give the audience something to identify with. But in retrospect, I think the kids just really liked the robots.

If only this had been more realized from the onset.

We were working so fast, the plots were full of holes.

Glad to see acknowledgement of this from on high.

These days I work as a clinical psychologist. I like to joke that, after screwing up so many little brains with cartoons, I’d better start fixing them.

Bryce Malek wrote:Oddly enough, no one ever provided us with any of the toys – we worked from photocopies of designs.

Could this be an explanation for some of the animation errors in the television show?
Re: Writers Bob Budiansky and Bryce Malek on Creating the Transformers (1852886)
Posted by Bumblevivisector on January 17th, 2017 @ 2:03pm CST

Bryce Malek wrote:Oddly enough, no one ever provided us with any of the toys – we worked from photocopies of designs.

Could this be an explanation for some of the animation errors in the television show?

A lot of that was AKOM never getting the finalized model sheets, especially for 1986 characters. But the #1 error-riddled ep 'Carnage in C Minor' featured Ultra Magnus and Galvatron drawn roughly toy scale (that is, WAY too big) compared to other characters, so if they were the only studio falling back on the toys for reference, that would explain a thing or two.

The strange part is, the comic artists did have some or all of the toys, to compensate for the model sheets not having backs (see Wipe Out's entry on the Obscure TF website; I believe this came from Don Perlin).