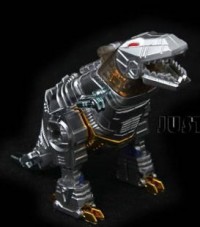 Site sponsor TFsource hooks us up with the latest news on the World's Smallest Transformers by Justitoys. We're going to get all five of the Dinobots in a special edition set. This set will be limited to just 300 pieces worldwide, and features all 5 dinorobots in a unique all chromed color variation. Each looks amazing in this heavily chromed look, and truly the pictures don't do these guys justice, in person they are amazing display pieces. Additionally, each set will come in an exclusive giftset, featuring all new artwork. Finally, the price will go up on these, so those who preorder early are guaranteed to get the best price. While supplies last, strict limit of 2 pieces per customer.

Feel free to check out the listing here.

I'm sure TFSource will raise the price on this set after a while, but I severely doubt these will really retain their value. Of course, please don't quote me on this when the price actualy does go through the roof!
Actually, does anyone have an idea what the Dark Retribution set goes for these days?
Re: WST Five Dinorobot Giftset Revealed (1084003)
Posted by Ravage XK on June 9th, 2010 @ 2:25am CDT
I also have the Dark Retribution set and the standard individual figures + a couple of those G2 editions.

For some reason these really don't appeal to me. Are they too shiny? Is that even possible?
Re: WST Five Dinorobot Giftset Revealed (1084006)
Posted by Editor on June 9th, 2010 @ 2:32am CDT
I already a set of the 5 originals, and I'm fine with those.

This could be cool for anyone who doesn't have the original ones and doesn't mind this color scheme, but it's a total pass otherwise. Not to mention the fact that it's a TFsource exclusive.

Next time Justitoys does a new WST I'm going to email BBTS and see if they can get it in, as I don't deal with TFsource either.
Re: WST Five Dinorobot Giftset Revealed (1084262)
Posted by Chaoslock on June 9th, 2010 @ 4:15pm CDT

So, on the 0.0001% chance I can muster the cash I might have to get in on these! Otherwise I'll just have to dream....
Click here to view additional comments about this topic at the Energon Pub Forums ...