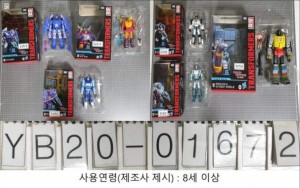 Greetings Seibertronians! Fellow Seibertron user, MadProject, dropped a bombshell of an image in our forums, that of a selection of Studio Series 86 figures and their boxes! The image seems to have been leaked via Facebook account, DaimChoc Reports. 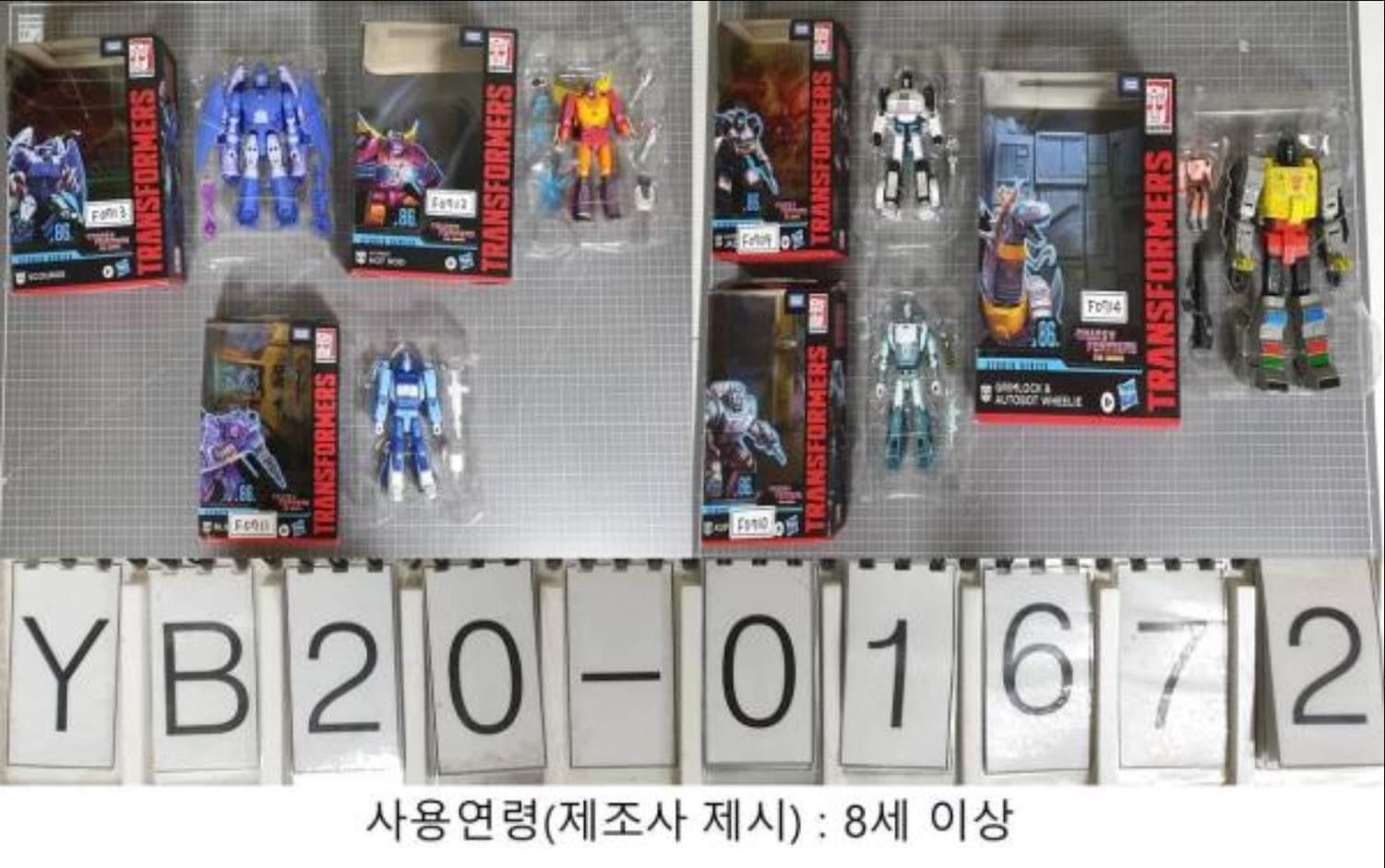 The image shows Voyager Class Scourge, Voyager Class Hot Rod, Deluxe Class Blurr, Deluxe Class Jazz, Leader Class Grimlock and Wheelie and lastly, Deluxe Class Kup. This reveals as well that the Studio Series 86 figures are not numbered like the other Studio Series figures. We also get a good look at the accessories the figures come with and it looks as though Grimlock is only coming with his gun (which is accurate to the movie). It is unknown at this point if the included wheelie transforms or not.

It is highly likely that Hasbro will be officially revealing them Friday, giving us an even better and more detailed look at them.

What do you think of these? Are you adding them to your collection? Let us know in the Energon Pub and stay tuned to Seibertron for all the latest news and reviews! 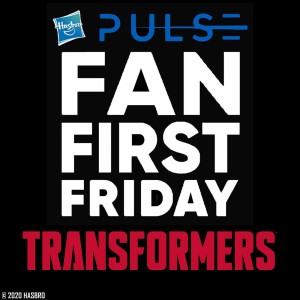 Greetings Seibertronians! Fellow Seibertron user, Aronjlove has shared with us that Hasbro are planning a new Transformers Fans First Friday through their Facebook account. The event will begin streaming 11 a.m. ET this Friday (October 16th).

Given that the description of the event talks about Studio Series, it's highly likely we'll get the official reveals of Studio Series 86 in the same manner as the reveals for Kingdom . This could also elaborate on the Devastator boxset that is already on sale in some countries.

As it also briefly mentions over lines we could also get official reveals of other Generations toys we already know about like Earthrise Thrust.

So remember to tune in this Friday!

What do you think we'll see? Will you be watching? Let us know in the Energon Pub and stay tuned to Seibertron for all the latest news and reviews! 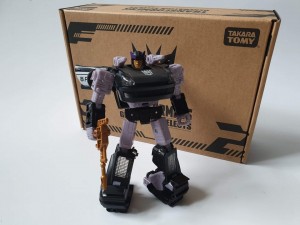 Well this is a bit of a surprise. Thanks to Seibertronians Mindmaster and Sabrblade, we have been directed to in hand pics of an as-yet-unannounced earth-mode version of War for Cybertron Trilogy Barricade. While this isn't completely unexpected, given that Barricade now seems to be the Decepticon version of any Prowl/Bluestreak/Smokescreen mold, it wasn't guaranteed to be made, either.

Given that he's standing next to a cardboard Selects style box, it could easily be assumed that he's going to be released in the Selects line, but as Sabrblade points out....

Everyone, say hello to Netflix Barricade:

Now, to clear up some confusion, this is indeed a Netflix toy and not a Generations Selects toy, despite the presence of a Generations Selects box behind the figure. We first knew about this figure from way back when we got these listings of many other Netflix figures, the first five of which later proving to be real.

As for the box seen in this pics, we don't know whose it actually is, but it definitely looks to be one of the TakaraTomy Select boxes since it has Takara's consistent misspelling of "Generations Selects" as "Generation Selects". Barricade, however, would not be coming in one of these boxes but instead in a normal Walmart Netflix Deluxe class package.

With that said, heeeeeeeeeeere's Barry! 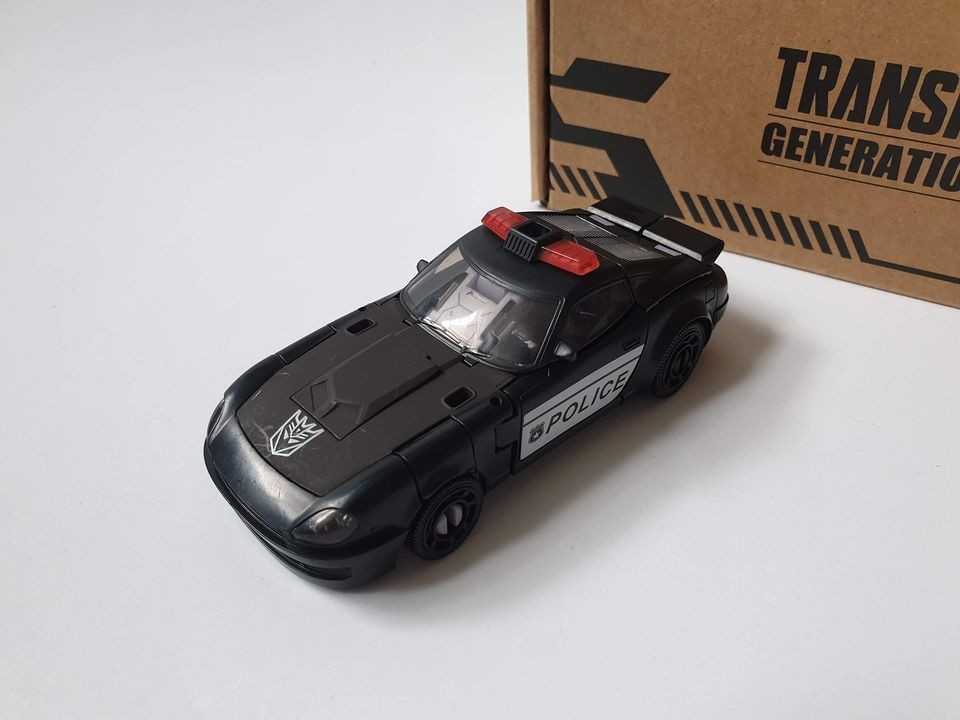 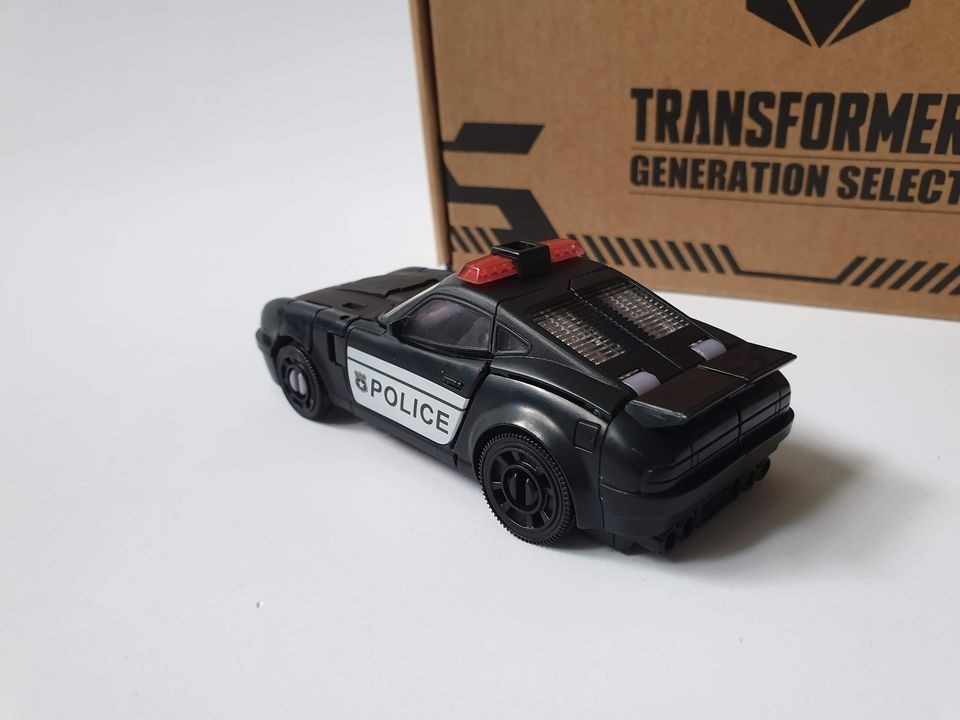 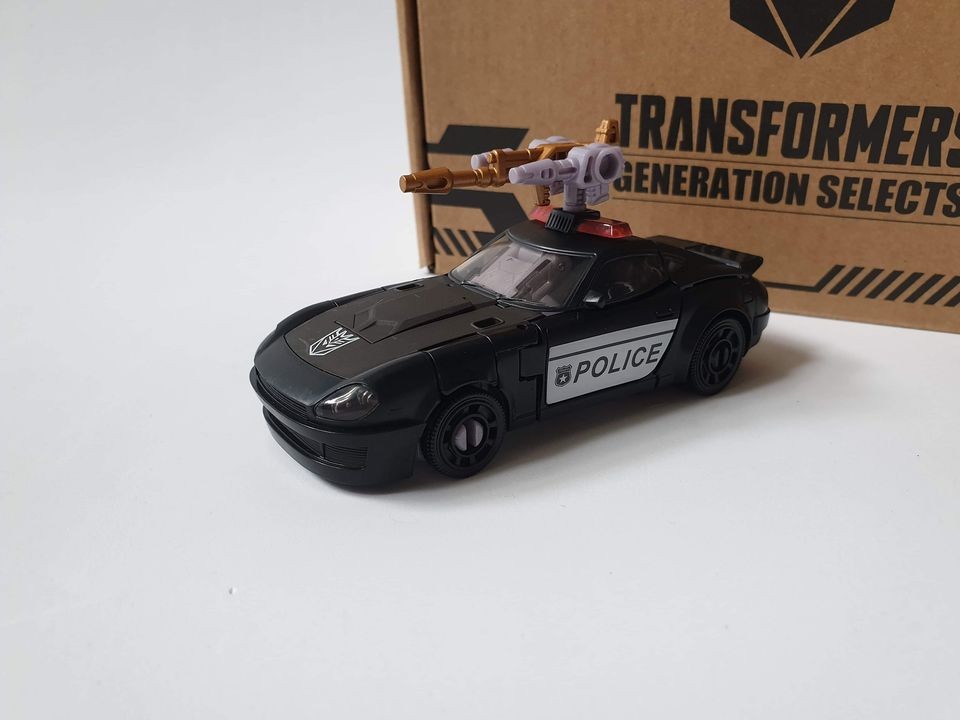 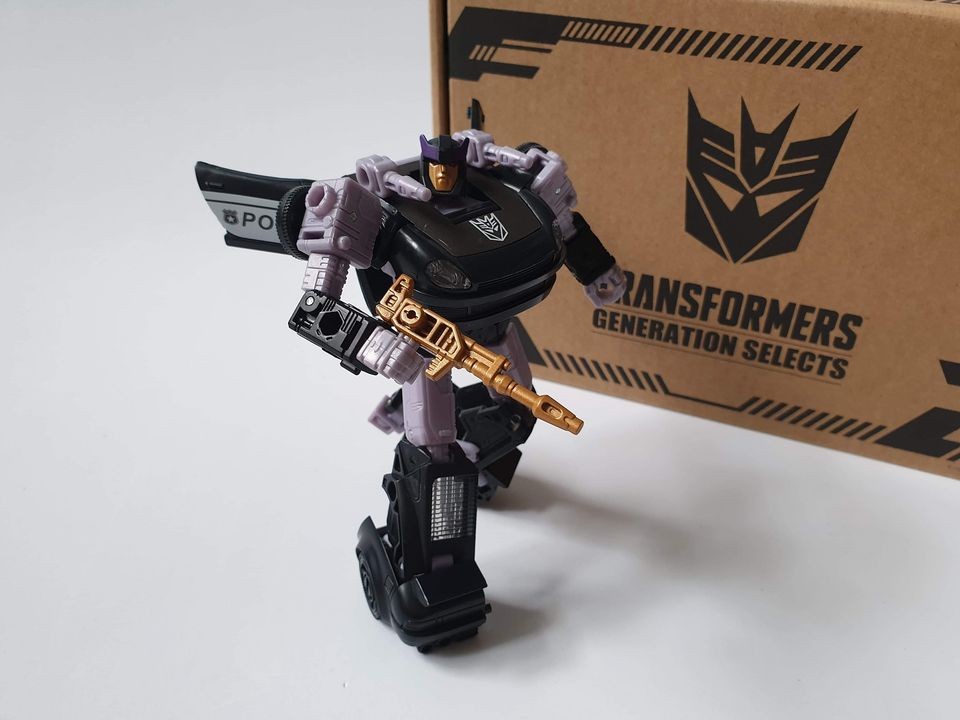 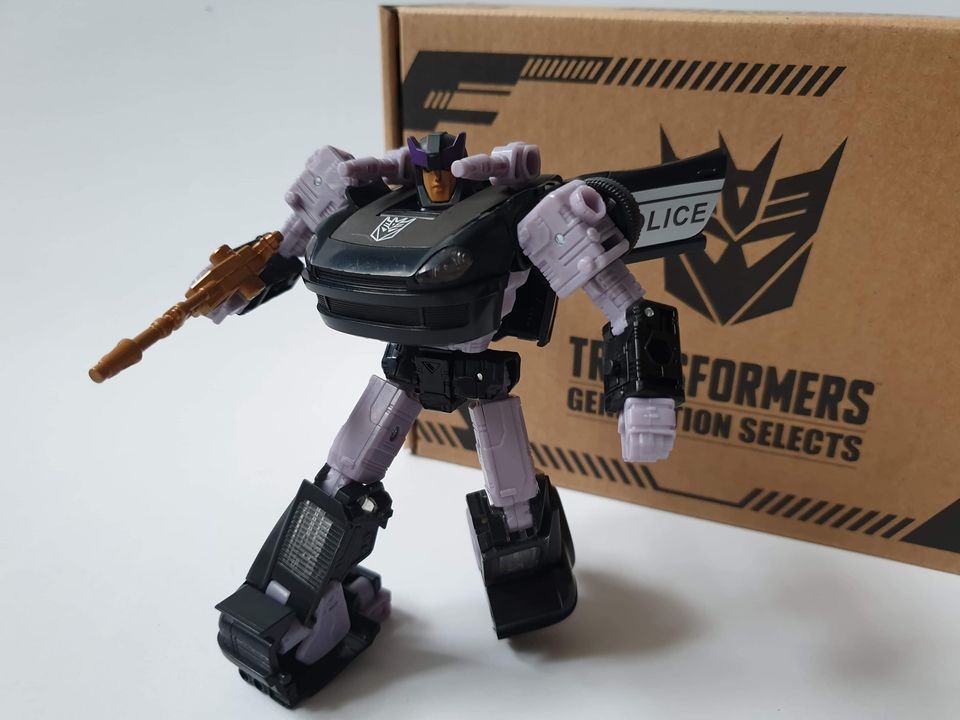 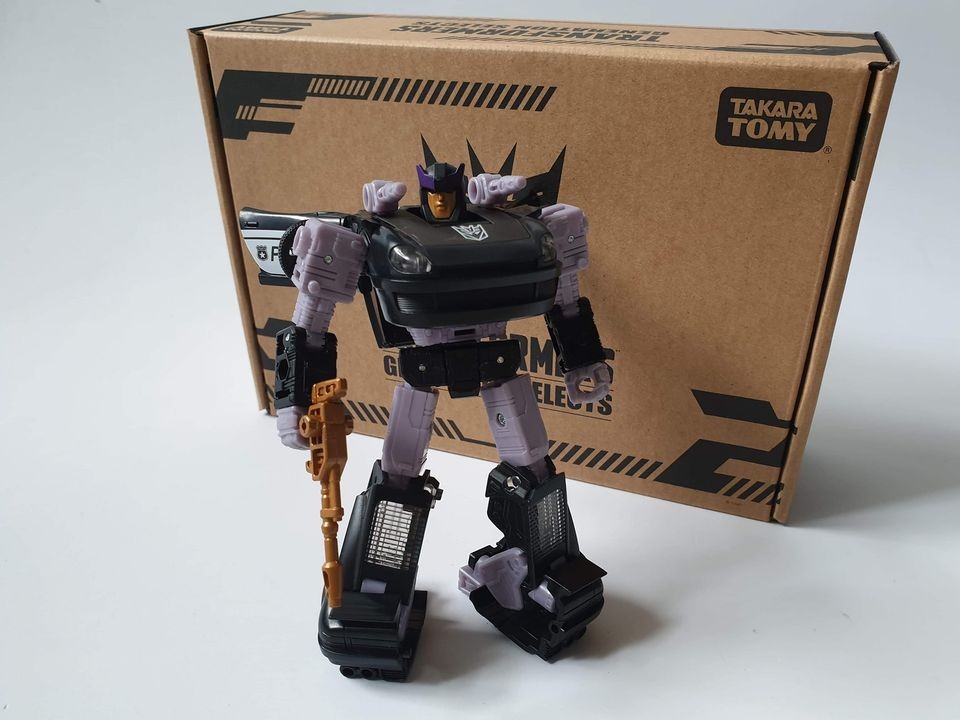 So, Seibertronians, what are your thoughts on this latest use of the Earthrise "Datsun" mold? While there's no indication of when this might be released, are you excited to add this Decepticop to your collection when the time comes? Let us know what you think below! 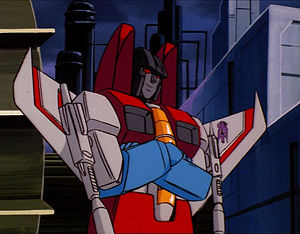 Greetings Seibertronians! Fellow Seibertron user, CyclonusG1, has let us know that our first possible look at how the forthcoming Transformers Masterpiece Starscream ver 2.0 will look when it enters production! The low res image was shared by Kapow Toys Facebook page.

We still have no details about what accessories he'll come with or his price. However if this image is legitimate then we could be getting more information soon. 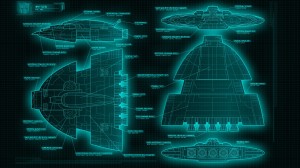 Greetings Seibertronians! Fellow Seibertron user, -WonkoTheSane-, has let us know that Hasbro have given gans their first look at next year's potential Titan Class release ..The Ark.

The reveal came as part of the Hasbro Pulse blog, Unboxed. 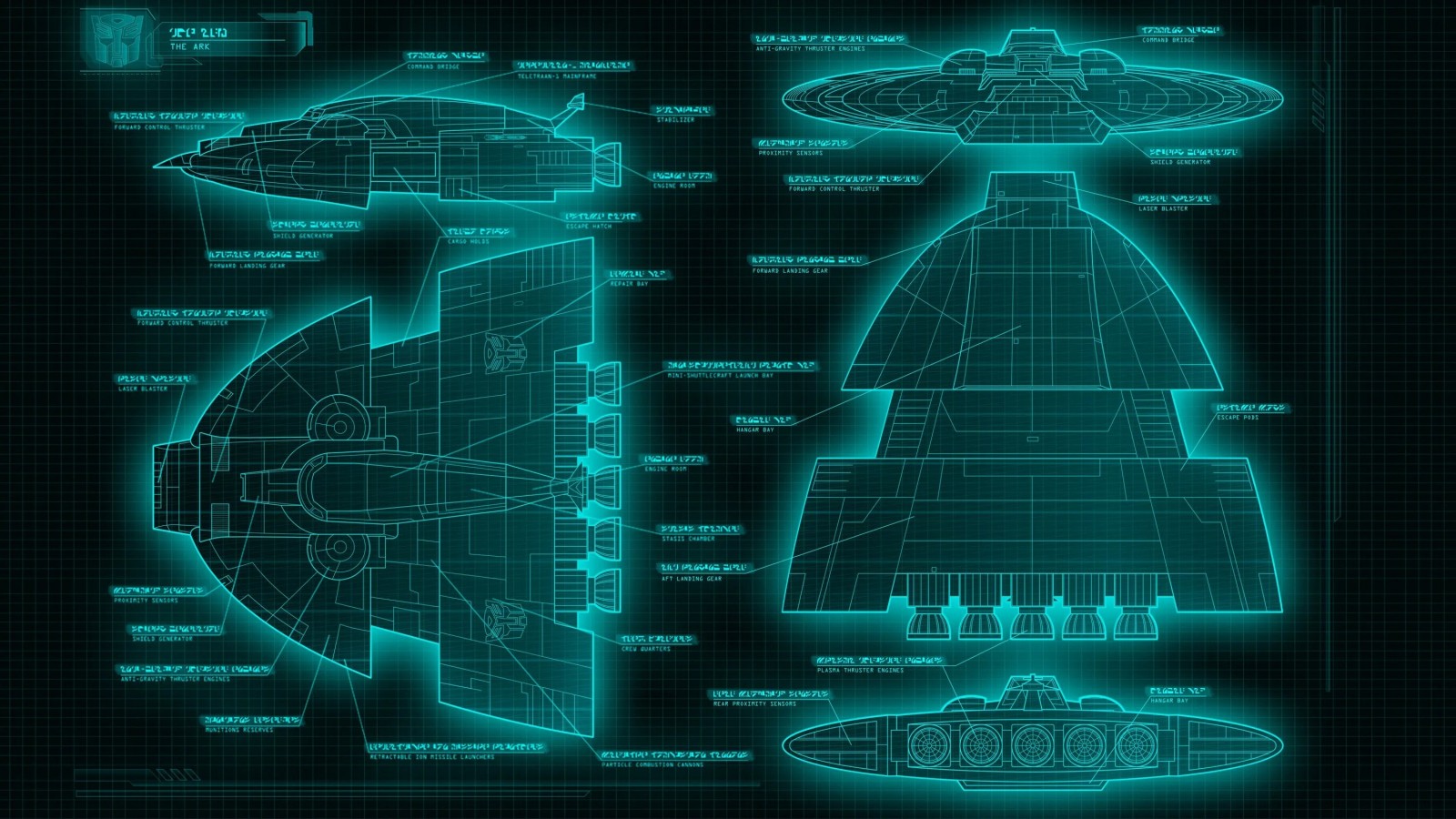 All the items of interest are coded in the Cybertronian language.

The post that accompanied the blog said the following:

Take an in-depth tour of the Autobots' infamous spaceship and save this blueprint for your next video conference call background or desktop wallpaper. Simply click "Download Here" to open its full size version, right click, and save!

Now, obviously there's no hints in this blueprint that there's any transformable elements, but considering the rumours surrounding next years Titan Class figure (or in this case, a playset), what you see here, could be just a taste of what is coming your way next year.

Would you buy a Titan Class Ark playset? Would you be happy if it all transformed or just elements of it like Teletran 1? Let us know in the Energon Pub and stay tuned to Seibertron for all the latest news and reviews! 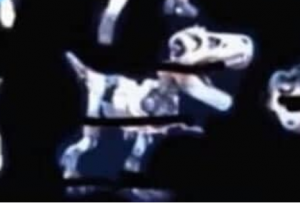 More upcoming Transformers leaks were posted on the Facebook page of Cybertron Philippines. In one image, we have our first look at one of the upcoming Fossilizers. These are new characters at the deluxe price point, that will be the gimmick of the Kingdom line. These are transforming dinosaur skeletons that can become added armour/weapons/appendages for other characters. We can see a T-Rex fossilizer below in both beast mode and robot mode, as well as being used by Warpath.

The same leak gave us a Hot Rod Figure. This is probably the one said to come in the Studio Series line so technically this could be our first look and the line going for the 86 movie aesthetic rather than staying dedicated Bayverse. Of course, that isn't clear since Hot Rod is shown out of context from the rest of the line he belongs with, unlike the Fossilizer.

You'll let us know what you think. 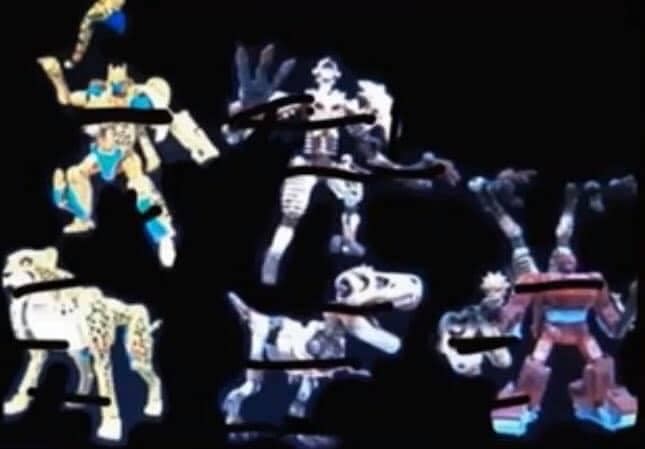 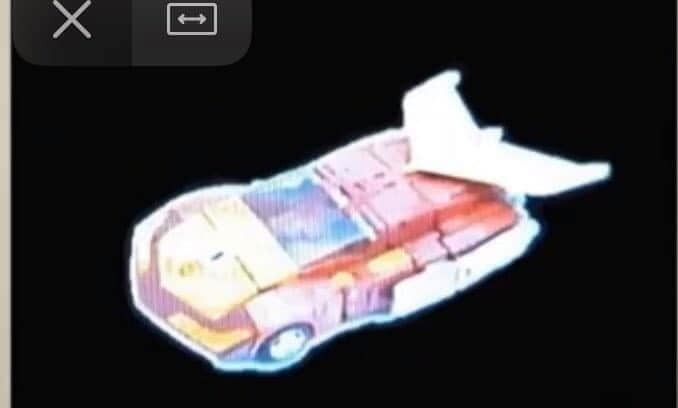 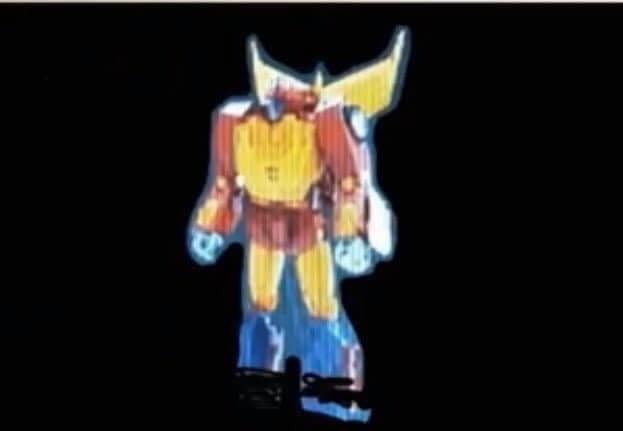 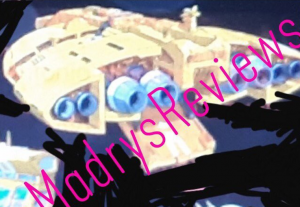 We have two pieces of Transformers WFC Kingdom news for you today. Firstly, Ton Ton's review of deluxe Blackarachnia came out. While some are equating this to a budget masterpiece, it can also look like your standard deluxe with your standard amount of paint and a beast mode that looks worse than the Masterpiece version. You'll let us know which way you gravitate when describing the figure.

We also have what could be our first glimpse at the Titan Class ark toy that will be released in the Kingdom line. We see it in ark mode and we see Teletraan 1. The image comes from Marco Madrys.

We thank fellow seibertronians Wonko-the-sane, Sabrblade, Dominus Prime and Sol magnus for informing us of these two awesome pieces of news. 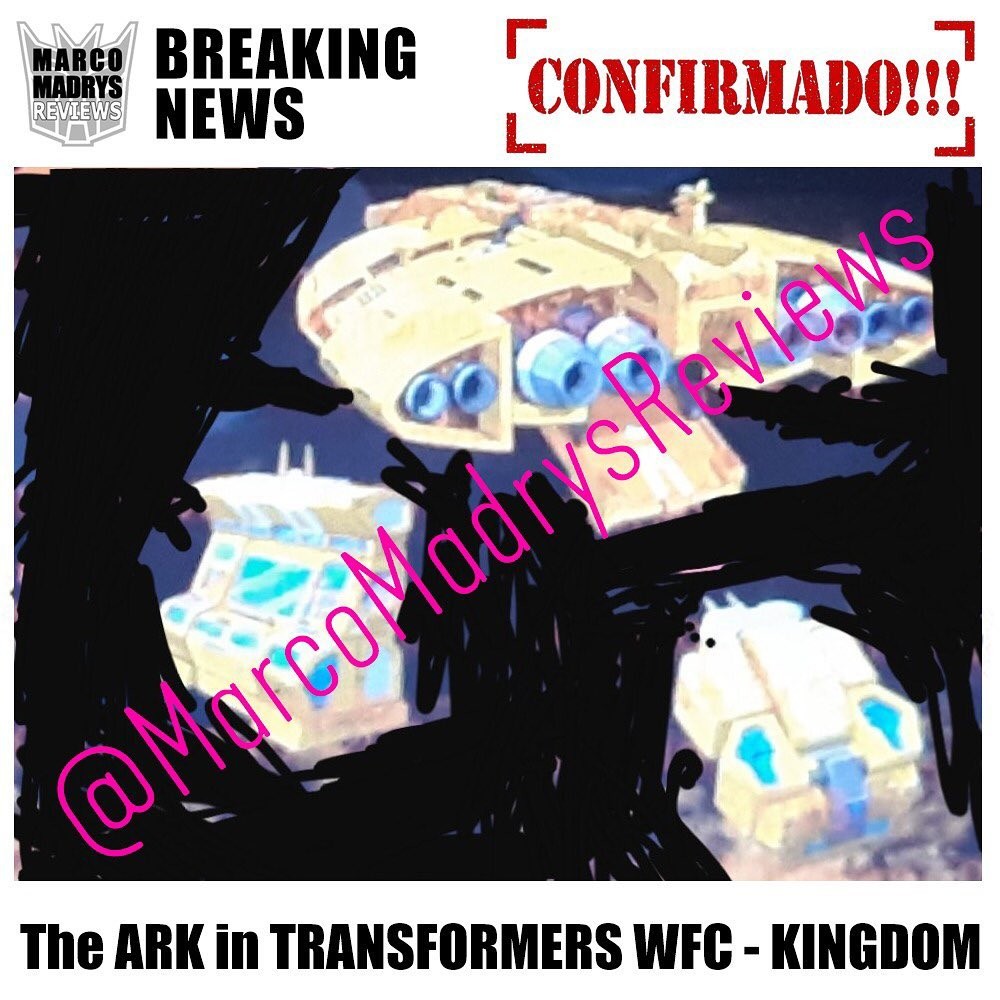 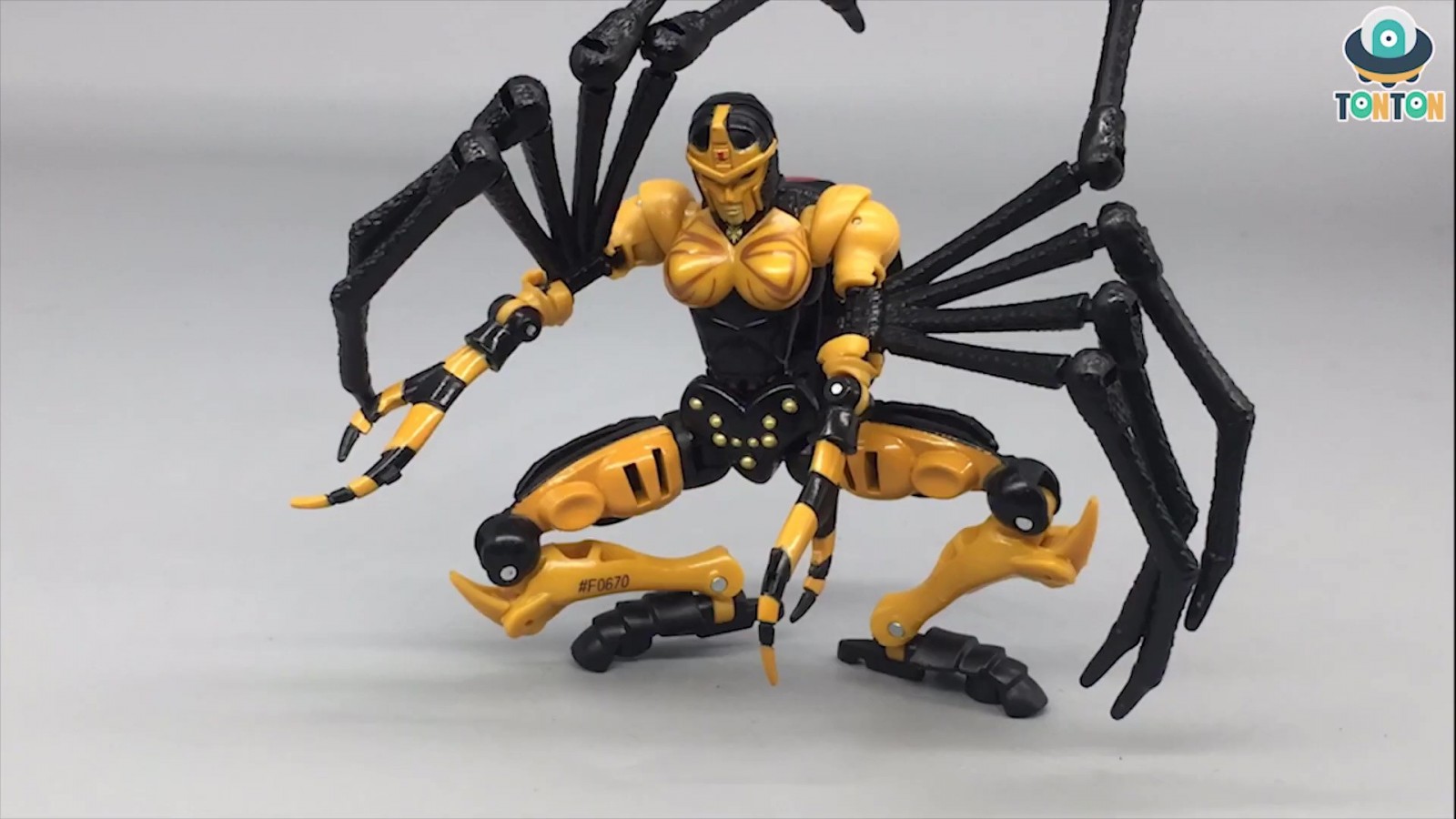 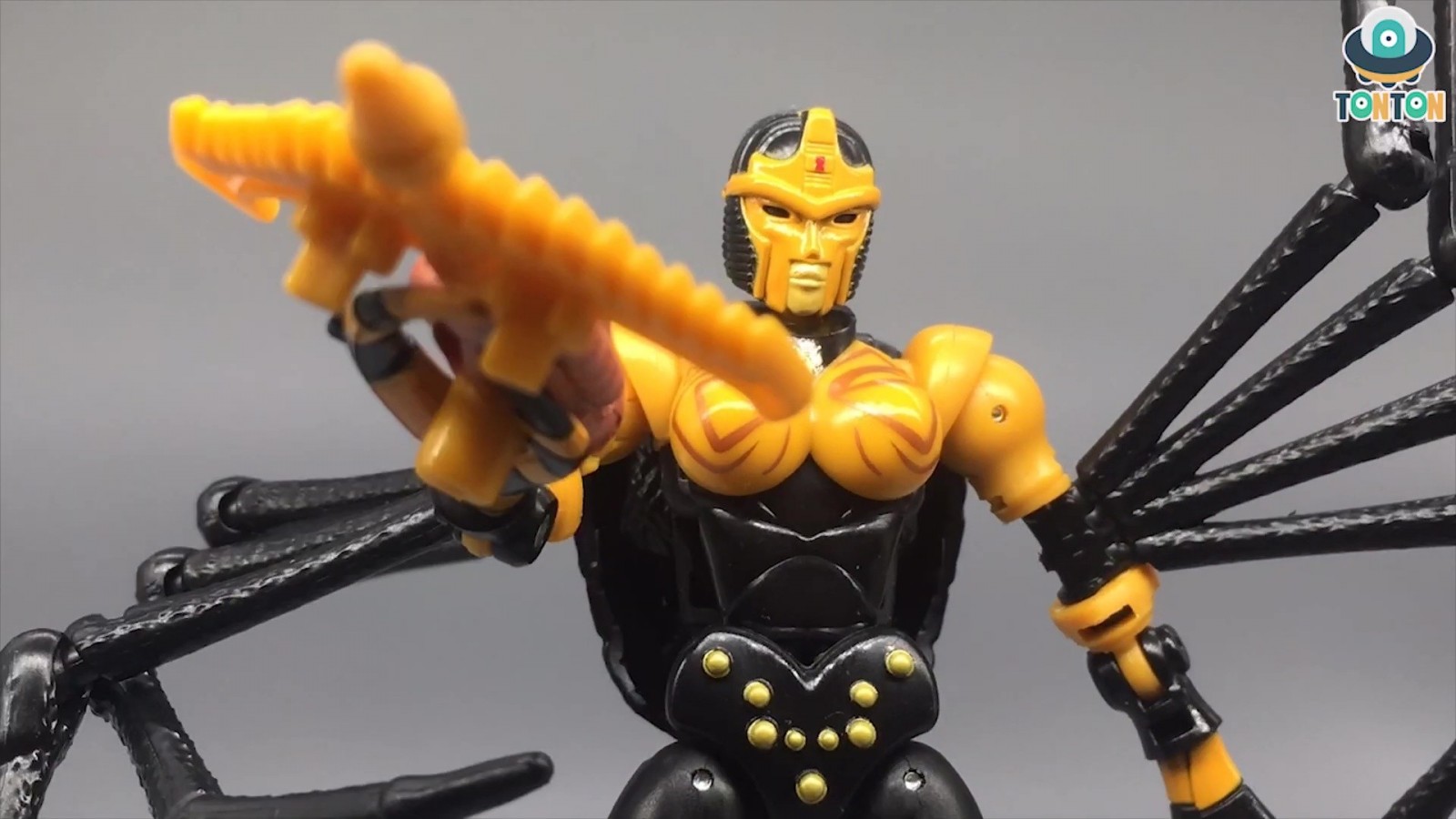 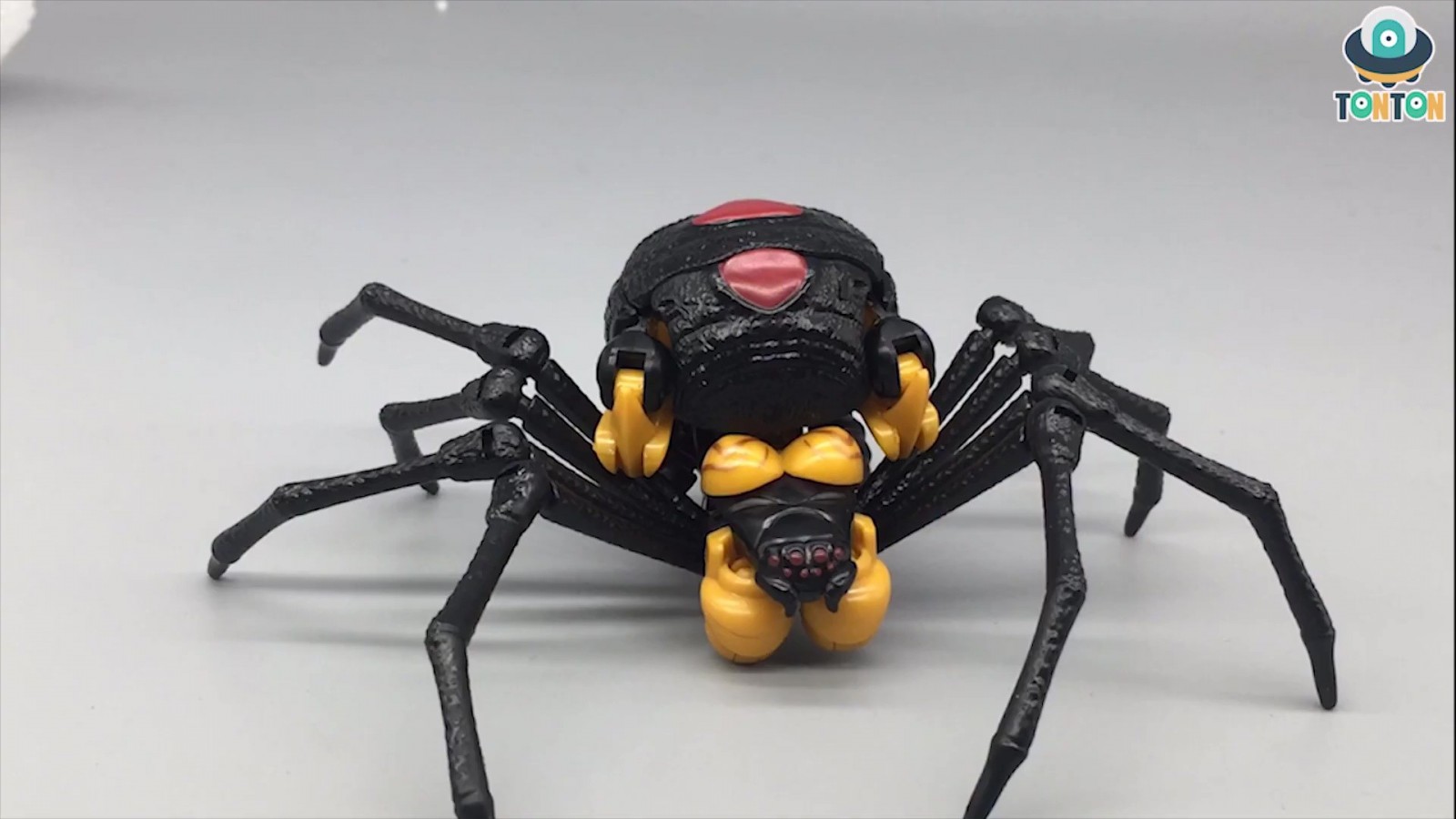 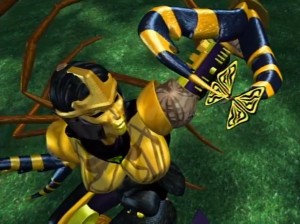 Greetings Seibertronians! Fellow Seibertron users, Kaynowa and -WonkoTheSane-, have let us know that an image has surfaced on the web giving us our first possible look at Blackarachnia's alt mode! 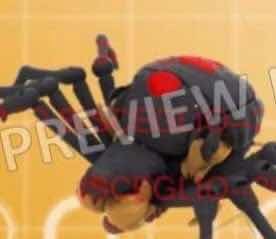 The image is only small and the watermark helps obscure some details but we can get an idea of how she'll transform.

The image was shared over at TFW2005 by one of the users of its board, Paladin. Though the image seems to originate on the popular image board 4chan.

What do you think of this? Like the style they're going for? Let us know in the Energon Pub and stay tuned to Seibertron for all the latest news and reviews! 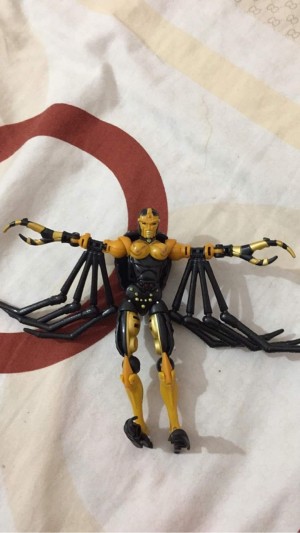 Thanks to several Seibertronians for sending in the latest news. The Factbook page Vector Sigma have posted what appears to be Deluxe Class figures from the upcoming WFC Kingdom line, specifically of Beast Wars fan favorite characters Blackarachnia and Cheetor, as well as what appears to be a heavily mistransformed Warpath in a very G1 cartoon style, next to a coalition of Cheetors. 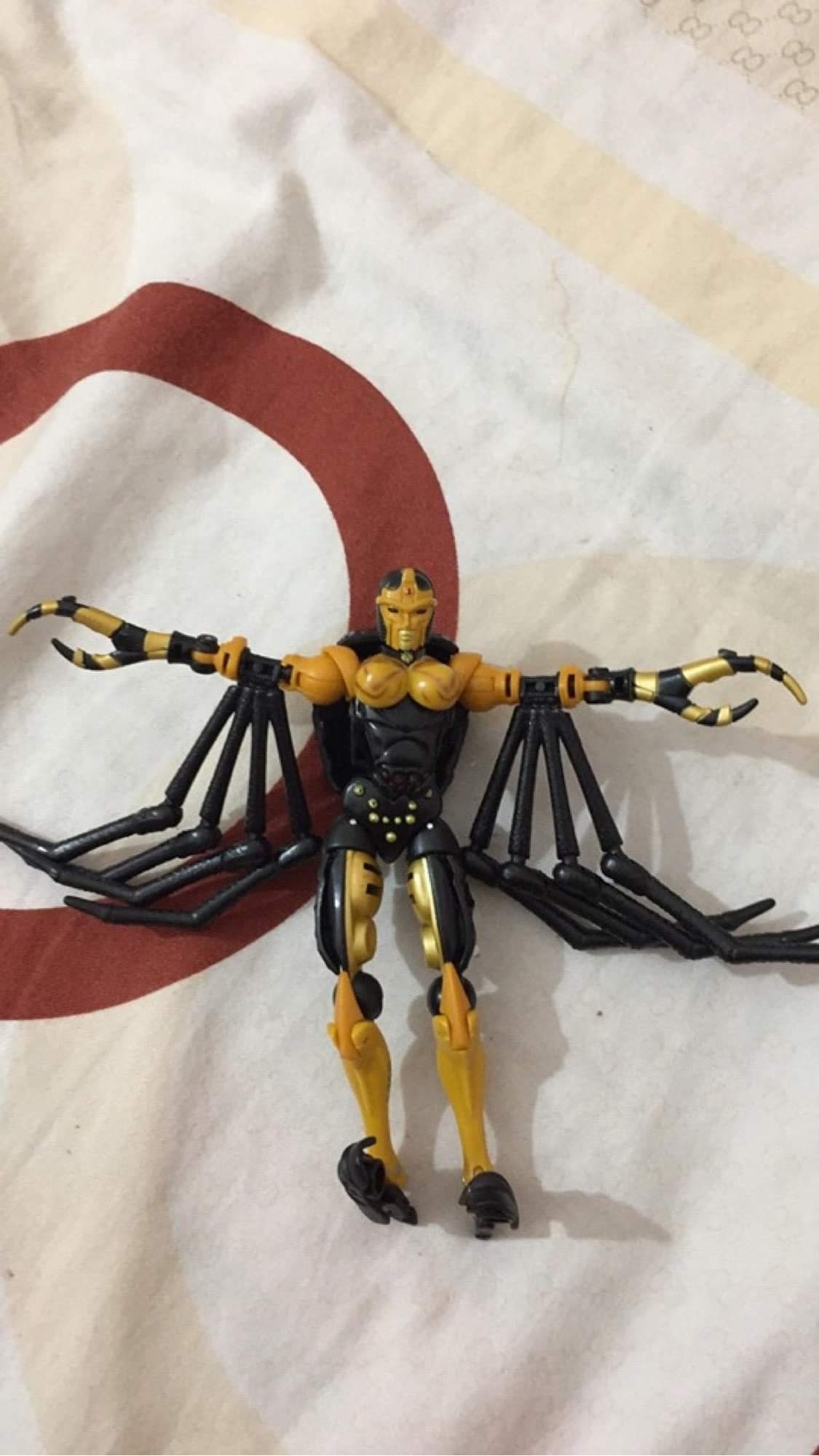 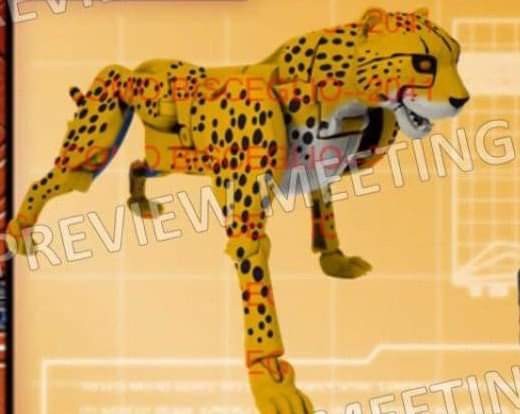 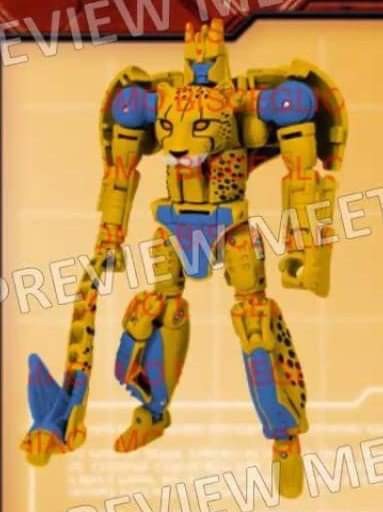 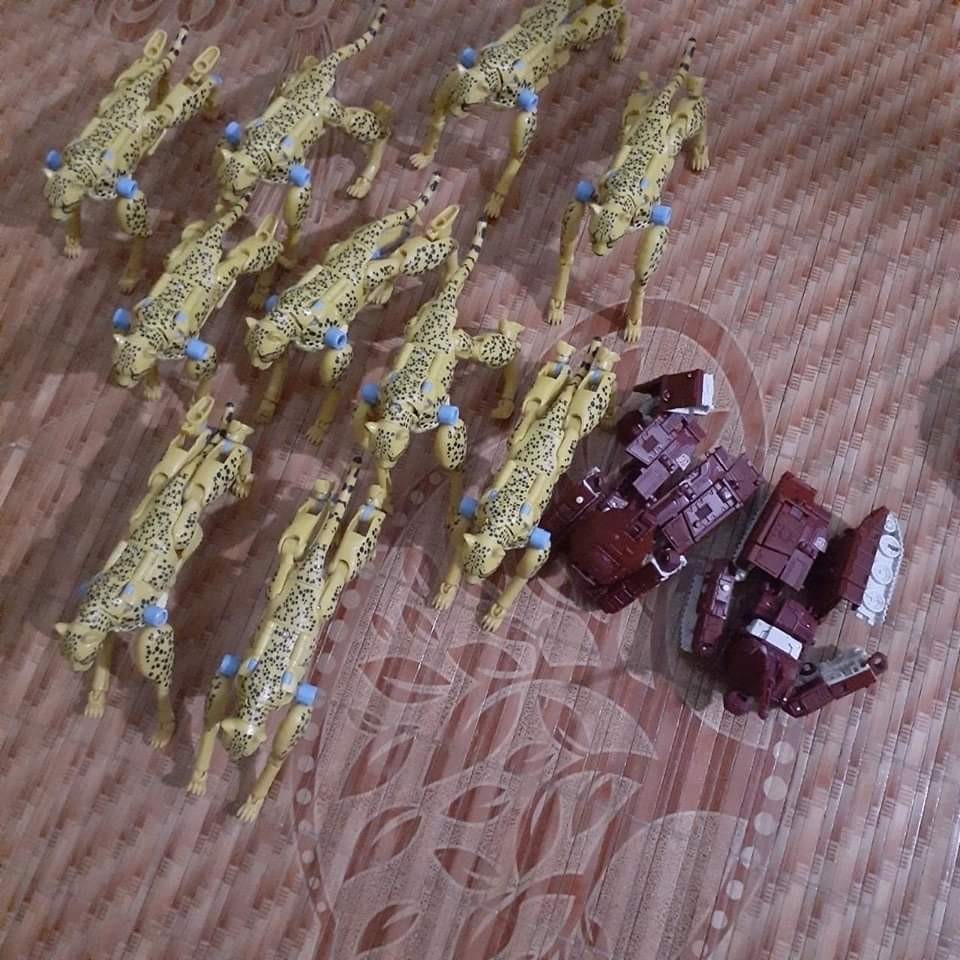 These images appeared on 4Chan, where the Vector Sigma page found them. While they appear to be legitimate, Hasbro and Takara have yet to officially reveal any figures from Kingdom, so take this rumor with a grain of salt.

What think ye of these potential figures, fellow Seibertronians? Let us know below, and speculate away on what might be leaked next.

The review was shared with us by fellow Seibertron user, Sabrblade.

We have embedded the review below for your convenience:

What do you think of this third version of this fan-favourate character? Will he be scurrying around your collection? Let us know in the Energon Pub and stay tuned to Seibertron for all the latest news and reviews!