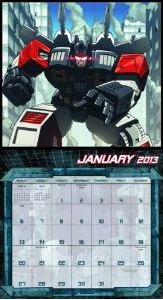 Amazon.com has listed a pre-order for Day Dream's 2013 Transformers Wall Calendar along with a few preview images. This item is scheduled to arrive August 1st, 2012 and can be pre-ordered for $14.99.

But yeah, no need for a calendar, already have way too many.
Re: 2013 Transformers Wall Calendar Preview and Pre-Order (1368902)
Posted by Mkall on April 13th, 2012 @ 7:29pm CDT
Looks like most of those images are from the All Hail Megatron series. They're nice images, but I have the Hardcover already.

Aw cool! I've long since given up on seeing anymore G1 style calendars. I enjoyed the 2003 & 2004 Dreamwave Pat Lee Artwork Calendars. That artwork was great in those calendars and I still have them in MINT condition, and even though I have several of Pat Lee's official Posters as well, I've still come close to cannibalizing the calendars to frame some of the artwork several times in recent years but I just can't bring myself to cut them up or un-due the staples etc. God it's hard to believe thats almost been ten years ago now. Geez, where does the time go.

Yo Duque, to my knowledge there havn't been any official G1 style calendars produced since the Dreamwave debacle in 2005...is that your understanding as well???

I think its mostly been Bayformer movie calendars with Megan Fox cheesecake etc. Correct me if I'm wrong.
I'll be picking this up, and that $15 price will drop after January 1st as well ( 'cause I'm a cheap skate).