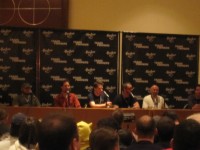 Collection will be released before SDCC

Transformers Animated Season 4 comic - not anytime soon, but they know fans are interested

Beast Wars - not at this time


BTW, what's the deal with Sky-Byte? For me he is only a lousy repaint, why is he a fan-favourite?
Re: BotCon 2012 Coverage: IDW Panel (Updated with Images) (1374189)
Posted by Tigertrack on April 28th, 2012 @ 3:51pm CDT
Sky Byte is a fan favorite, most likely because he is so quirky. A poetic singing shark who actually is not all about kill, maim, destroy. Maybe the surprising personality in RID (2000s) did it. I was never personally too fond of him.

>(http://www.youtube.com/watch?vHuC_HlOb1ZM) And am definitly interested to see what's in store for Metroplex since his Spotlight appearance a long time ago. Also I know there are going to be a lot of happy Death's-Head fans

fans out there reading this ,yes.

I'm also taking a shot guessing that I'm the only one waiting to hoping to hear about the Inhumanoids returning ?


Thought I'd give you guys another exclusive.

I was told this was OK to post online since his image is floating around the web now anyway. This is Sky-Byte's official design for IDW as he's appearing in RID, staring in issue 5.

He's largely based on his original toy, though the transformation is a little different than originally.For example, his shark head now becomes his chest instead of a "faux"-shark face on his chest. And I added painted teeth on his shark face like you'd see on vintage fighter planes.

Basically, his alt-mode is some sort of space shark. Who is to say something that looks like a flying shark couldn't have evolved on some planet somewhere? Makes no less sense that dinosaurs in space, eh?

Since IDW showed these covers during their panel at Botcon last weekend, I think there's no problem to show it here!

Do you like Decepticons? Dinobots so here we go!

Interconnected covers pencils for issue #7 of Transformers: More Than Meets the Eyes and Transformers:Robots in Disguise. Those are the incentive covers for the Decepticon and Dinobot month ( July/2012)

About damn time.
Re: BotCon 2012 Coverage: IDW Panel (Updated with Images) (1375382)
Posted by trence5 on April 30th, 2012 @ 10:49pm CDT
Good. I was just to post if anyone had any idea of what's become of Orion Pax since "Death of Optimus Prime".
Click here to view additional comments about this topic at the Energon Pub Forums ...