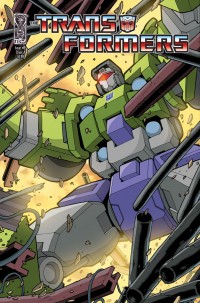 The comic book news keeps rolling in this week. Courtesy of Comics News I, we've got solicitations for the month of June, and with it comes IDW's most explosive work to date. 'Ongoing' continues, and so does Revenge of the Fallen sequel Nefarious. There's the follow up issue of the new mini-series Ironhide, and three Transformers Paperbacks, 'Transformers, Volume 1: For All Mankind', 'Transformers: The Covers' and 'Transformers: Allspark Almanac, Vol. 2'. Check out all of the beautiful covers, intensive spoilers, and information about each comic below! Mike Costa (w) • Javier Saltares (a) • Don Figueroa, Saltares (c)
Spike Witwicky commands a unit specially trained to take down Transformers; he has single-handedly brokered peace between the U.S. and the Autobots. But there are secrets in his past that could jeopardize all of that. Good thing Spike's not the kind of guy who would recklessly endanger the entire world to settle a personal score, right?
*2 regular covers will be shipped in a 1-to-1 ratio.
FC • 32 pages • $3.99 Mike Costa (w) • Casey Coller (a) • Marcelo Matere, Coller (c)
Stranded on modern-day Cybertron, Ironhide discovers he's the only functioning life-form on the planet. Oh, except for the Swarm. Writer Mike Costa continues to put the fallen (now resurrected?!) Autobot through some strange paces, with stunning art by Casey Coller.
*2 regular covers will be shipped in a 1-to-1 ratio.
FC • 32 pages • $3.99 Simon Furman (w) • Carlos Magno (a) • Brian Rood, Magno (c)
Even SOUNDWAVE’s monumental patience has limits, and at last he goes fully on the offensive—staging a direct assault on The Initiative’s base of operations. But the mysterious human organization always seems to have an extra trick up its sleeve, and this latest one’s a real jaw-dropper! By Simon Furman and Carlos Magno.
*2 regular covers will be shipped in a 1-to-1 ratio.
FC • 32 pages • $3.99 Jim Sorenson, Bill Foster (w) • Various (a) • Marcelo Matere (c)
The AllSpark Almanac II captures the magic of the most whimsical TRANSFORMERS series ever with a wondrous examination of this amazing universe. This volume is packed with behind-the-scenes sketches, interesting facts, production artwork, and musings from the characters themselves. Relive the thrill of the final season of Animated and learn what might have been had the show continued. Hard-core fans and neophytes alike will find this an essential tome. You won’t want to miss it!
TPB • FC • $19.99 • 220 Pages • 8.5” x 11” • ISBN: 978-1-60010-683-5

Transformers, Volume 1: For All Mankind Mike Costa (w) • Don Figueroa (a & c)
It’s been three years since the devastating events of ALL HAIL MEGATRON. The Earth has been rebuilt, the AUTOBOTS are in hiding, and the next great era in the TRANSFORMERS saga is about to begin! Critically acclaimed writer Mike Costa is joined by superstar artist Don Figueroa for IDW’s biggest book of the year—the launch of the first ongoing TRANSFORMERS title in five years!
TPB • FC • $19.99 • 152 Pages • ISBN: 978-1-60010-684-2 txex97 wrote:How many issues will be in the Ironhide series?