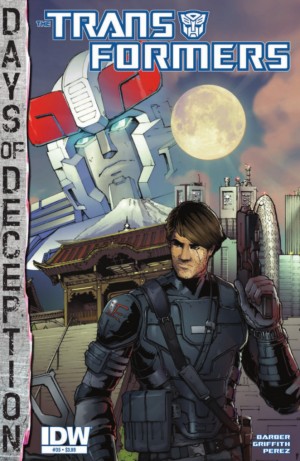 As of this week, Robots in Disguise loses its subtitle, and becomes IDW's Transformers ongoing with issue #35 and the start of Days of Deception! Check out a full preview below, and head back here later this week for the Seibertron.com review.

Bullet points:
One human knows the truth of CYBERTRON’s first encounter with Earth… but will his ancient enigma mean war for the AUTOBOTS?
30th Anniversary Variant cover by Andrew Griffith!

lol its obvious that Andrew drew himself on the cover

I just met him once last German CONS TF convention...
He even accepted an honorary shockwave custom from me

Synopsis
Days of Deception begins! PROWL and the CONSTRUCTICONS hunt the world's deadliest game-three humans with a history of fighting CYBERTRONIANS! Lines are drawn as human and machine alike are drawn into-the ONYX INTERFACE!

But does it know why kids love Cinnamon Toast Crunch?

When we last left Robots in Disguise, a history lesson from Alpha Trion had concluded, with Optimus Prime wondering just what, if anything, out of what was learned that he should keep as a secret to the rest of his crew. Transformers #35 drops the subtitle and picks right up where we left off, and we check in with some old human "friends".

Of course, Prime and his crew are keeping a close watch on the humans, given their recent alliances with Galvatron's earthbound Decepticon crew. The interactions between Prime and the various crew members, and between said crew members themselves, continues the subtle but deeper-by-the-issue characterization that's been prevalent in the past several issues of Robots in Disguise that was sorely lacking in the book's earlier days.

Barber's tone indeed keeps up with what we've seen out of the past several months, injecting humor where needed and the right amount of snark (or lack thereof) in certain characters. You may also be surprised to see some returning faces not seen since Dark Cybertron, but then you'd look like a fool. Transformers is, after all, written by John "Continuity" Barber himself, and in his world, characters don't just exist to sell toys. At least, not in the long haul.

Even Galvatron's got jokes these days

By the end of the issue, pieces are in place for verbs to start happening. However, in typical Transformers style, you'll be left hanging for another month to find out just what those verbs are.

This issue features regular Transformers artist Andrew Griffith, colors by Josh Perez, and lettering by Tom Long. Unlike our esteemed comics editor Va'al, I'm not a great art critic, technically speaking. That said, I enjoyed the contrast of styles between the human-focused scenes vs. the scenes with our robotic cast. The sharp lines and vibrant colors of the Cybertronian crew are in distinct contrast to the almost mushy look of the human characters. The monochrome toned clothing featured on them throughout (at least mostly) helps with this as well.

So you think KFC is still open?

If I had to nitpick one thing with the art, it's that the humans aren't always the most convincing looking. Some of them feel a little rushed. Let's be honest though, if any of us were working on a comic book about Transformers, we'd probably rush through the pencils and ink on the human cast as well. Of course this isn't a blanket statement by any means, as Griffith shows that he can not only convey emotion through our favorite giant alien robots, but through the faces of good 'ol humans as well.

No really, full on spoilers below. This is your last warning.

This issue is very much a case of a fact that impatient readers lament on a regular basis - to play a game of chess, you have to get the board set up correctly first. While this may just be a game that leads to another game, that "another game" being Combiner Wars, it's one that ought to be played. Plot points left dangling at the end of the Costa run, and even by the transition into All Hail Megatron, may finally get addressed. At the very least, we know what's going on with Jimmy Pink and what his motivations are for siding with that darn dastardly Spike.

What a gang of pals.

By the end of the issue, we've got Prime and Soundwave moving into their places, Galvatron setting some of his plans into motion, and human characters doing things. That's really all I can say to that story arc so far, they're just doing stuff. It's very cool to see Prowl and his friends start their pursuit of That One Guy that probably deserves to be stomped by a 'bot boot, but something about this human plot feels like it's been inserted just to wrap up some old plot lines and lead the main characters to their Macguffin for the next trade paperback. I don't actually hope to be wrong on that, which may be part of what frames my opinion there. Earth based stories in Transformers are cool when they focus on Transformers with the humans as a sideshow, character building device, or symbolic element. This succeeds in that so far, so I can forgive simpler details on why said humans are doing what they're doing.

Counterpunch sent me a movie that started like this once

Also, for all the great stuff going on with Prowl, there are some hints that - get this - something's manipulating his mind. If that seems familiar, well, it should. We've seen that movie and we know how it ends. I'm hoping there's some fun and creative end game that these hints are going to lead to. The shades of grey that Prowl demonstrates, along with his foil in More Than Meets The Eye in Megatron, has been a great thing to witness and hopefully this creative team avoids going into full blown Cerebro-shell gimmick land this time. His interactions with Optimus Prime in the past handful of issues have been something to remember and didn't feel cheap, so here's to hoping that they don't end up that way in retrospect.

Me too, little buddy

It'd be hard to give this issue any kind of "right around average" score. Scores are a bit silly anyway on totally subjective reviews such as this. While I certainly have some fears for the future after reading it, these also may be totally unfounded. The actual content is very enjoyable, and if you've been reading Robots in Disguise you can't afford to miss out on Transformers #35 simply due to the amount of set up that happens.

That said, this is part one of something bigger, and it certainly feels that way. It does its job well in that regard, but if you're looking for some pay off, this month is not the time you're going to get that satisfaction. I recommend this as part of a whole, though if you haven't been keeping up and don't intend to, this is a hard one to recommend to a casual Transformers comics reader.

For the regular IDW reader, this shouldn't be missed

bluecatcinema wrote:They probably ditched the subtitle so it wouldn't be confused with the new cartoon.

This, exactly. John Barber confirmed this for us in Twincast Episode 100

Re: IDW Transformers #35 Full Preview (1621474)
Posted by Heckfire on November 12th, 2014 @ 5:09pm CST
I just had a thought: Spike is being sought partially because he supposedly has something to do with the Combiner Wars...and in the original G1, his counterpart was the head of Fortress Maximus. Do you think there might be a connection, particularly since his enemy, Prowl, is the "head" of Devastator? Just spitballing here.
Re: IDW Transformers #35 Full Preview (1621556)
Posted by budmaloney on November 13th, 2014 @ 2:08am CST
I'm happy if they just make the series just about Prowl. No one else

"Shooting Sharkticons in a space barrel".

Along with Sideswipes dialogue, which was spot on, I'm happy Barber is moving away from fanfic and making strides toward putting out an authentic Transformers product.
Re: IDW Transformers #35 Full Preview (1621969)
Posted by ScottyP on November 14th, 2014 @ 12:18pm CST

Heckfire wrote:I just had a thought: Spike is being sought partially because he supposedly has something to do with the Combiner Wars...and in the original G1, his counterpart was the head of Fortress Maximus. Do you think there might be a connection, particularly since his enemy, Prowl, is the "head" of Devastator? Just spitballing here.

I hate their version of Spike, which means they did a decent job with him because we're not supposed to like him. I want them to kill him off, but if they don't, this would be a very cool way to keep him in the fold!