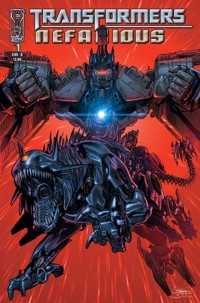 We get a sneak peek at IDW's March titles for Transformers thanks to Comics Continuum. Notably is the start of Nefarious, bridging Revenge of the Fallen till the start of the 3rd Transformers Movie. Check out each comic's cover and their description below.

The sequel to TRANSFORMERS: REVENGE OF THE FALLEN starts here! What is The Initiative? More to the point, why doesn't the all-seeing SOUNDWAVE know anything about it? How did they come to reanimate/control RAVAGE? SOUNDWAVE must find the answers, and he'll destroy anything in his path to get them!

Written by Mike Costa, art by Don Figueroa, covers by Figueroa, Andrew Wildman (c) OPTIMUS PRIME and Spike Witwicky have a chat that could define the future of AUTOBOT and human relations! But lest you think it's all talky-talk, back at RODIMUS' camp something big happens, something very big. A game-changing event in IDW's TRANSFORMERS, with a Don Figueroa double-page spread that has to be seen to be believed! *2 regular covers will be shipped in a 1-to-1 ratio.

Written by Zander Cannon, art by Chee, covers by Guido Guidi and Chee.

When BUMBLEBEE has a change of heart and goes back to help a little girl whom he had used to discover her father's secrets, he finds himself pursued by the terrifying and unstoppable SKYWARP! BUMBLEBEE's big adventure as leader of the AUTOBOTS comes to an explosive and thrilling conclusion!

Transformers: Last Stand of the Wreckers #3

Trapped inside a maximum-security prison, surrounded by DECEPTICONS, and outgunned at every turn, it's time for the newest WRECKERS to earn their stripes. But as the horrors of Garrus-9 are laid bare and the fate of FORTRESS MAXIMUS is revealed, SPRINGER realizes his team has bitten off more than it can chew.

TRANSFORMERS: BEST OF THE UK: PREY

The Best of the UK series returns with the five-part Prey! MEGATRON unleashes the feared PREDACONS to seek and destroy OPTIMUS PRIME. Could this be the end for the AUTOBOT leader? Find out in this fan-favorite collection of classic tales from across the pond, written by TRANSFORMERS mainstay Simon Furman.

Surf's up in this special con edition of the final issue of All Hail Megatron. For the California-based Long Beach Con, artist E.J. Su brought the TRANSFORMERS to the beach in a special recreation of the classic Endless Summer movie poster. Just because you missed the con doesn't mean you have to miss this special cover now! Only 400 copies were printed!

~Seibertron.com, your #1 stop for Transformers news!

I highly recommend picking up the exclusive AHM #16 exclusive cover. Love that image!