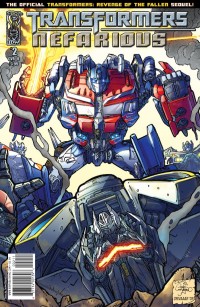 Layers within layers are revealed as the massive global conspiracy that is Project: Nefarious continues to unfold. OPTIMUS PRIME wants answers, and he’s prepared to go to any lengths to get them. But how far is too far? And by committing his forces to stopping SOUNDWAVE, is Prime just playing right into The Initiative’s hands?
Transformers: Nefarious
32pg.
Color
$3.99 US Nefarious #2 will be at your local comic store this weekend, along with the Tales of the Fallen Trade Paperback.