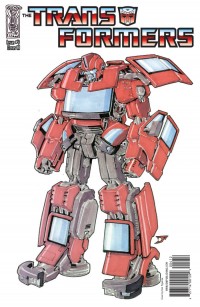 The third issue of IDW's Transformers 'Ongoing' left us with a lot of questions and a handful of captured Autobots. The fine folks over at Bzzurkk have ended the cliffhanger, as they've got the fourth instalment previewed. This issue, among many other things, looks to focus on a familiar blue fighter jet. You can check out the covers, description and a little preview below....

His ambivalence cost him his allegiance. His betrayal set the stage for Autobot victory. His name is THUNDERCRACKER, and this issue reveals what he's been doing these past three years after his brutal expulsion from the Decepticons in All Hail Megatron! Mike Costa and Don Figueroa show you perhaps the most unique transformation of all...

....while the rest can be seen at your own discretion here. Ongoing #4 is set for release at your local comic stores this Wednesday, February 24.

Till then, keep it at Seibertron.com for the fastest Transformers news on the net!

I'd give away more but Tigertracks has got a nice review coming up... right now.