Seibertron.com's "Enter to Win" Contest for Transformers Dark of the Moon Blu-Ray from Paramount

You must be registered and signed in to enter this contest.
This is your chance to win a FREE copy of Transformers Dark of the Moon on Blu-Ray in this exciting contest from Paramount Home Entertainment and Seibertron.com. All you have to do is be a member of Seibertron.com, enter the contest on this page, and keep your fingers crossed! Three lucky Seibertronians will be announced as the winners of this contest on Monday, October 3rd, 2011. 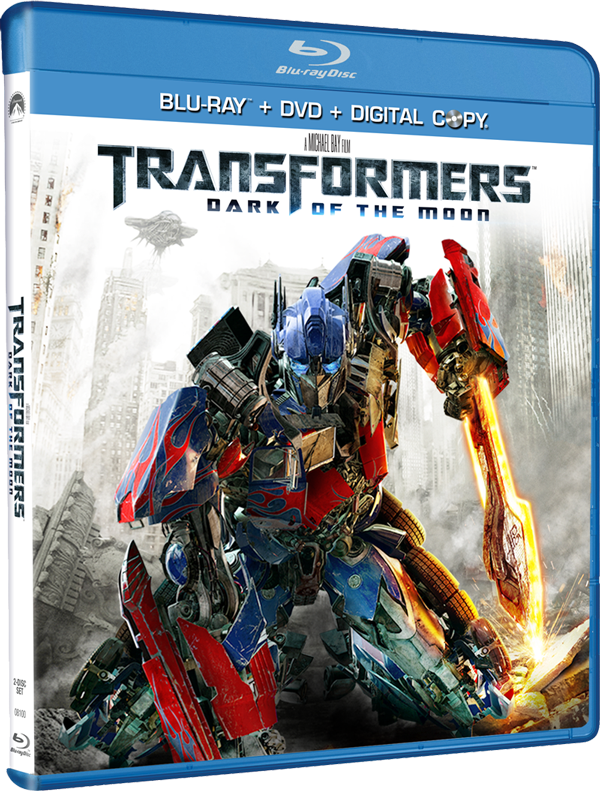 The following text is the official press release from Paramount Home Entertainment regarding Transformers Dark of the Moon's release on Blu-Ray and DVD.

"The Best Action Movie Ever"* Prepares for Launch on TRANSFORMERS FRIDAY, September 30

HOLLYWOOD, CALIF. (September 9, 2011) - Spectacular action, stunning visual effects, non-stop thrills and fan-favorite characters including OPTIMUS PRIME, BUMBLEBEE and Sam Witwicky rocketed Transformers: Dark of the Moon into the stratosphere, with the latest installment of the wildly popular TRANSFORMERS franchise surpassing its predecessors to earn over $1.1 billion at the worldwide box office. From Paramount Pictures in association with Hasbro, the breathtaking film redefines the scale, scope and emotional impact of what a blockbuster can be with the ongoing epic story of the mighty AUTOBOTS in a thrill-packed adventure that the whole family can enjoy. Distributed by Paramount Home Entertainment, the film will debut in a Blu-ray/DVD Combo with a digital copy and on standard DVD on Friday, September 30, 2011, followed by a deluxe Blu-ray and DVD release, including a Blu-ray 3D, in the coming months.

"For fans who can’t wait, the Blu-ray release in September will deliver an awesome ride with the movie in stunning 1080p high definition and a 7.1 Dolby TrueHD soundtrack that was personally overseen by our phenomenal supervising sound mixer just for the Blu-ray," said director Michael Bay. "As you know, we put a lot of effort into the 3D experience for the theatrical release and I want to make sure we get it right for home viewing - and that process takes time. So stay tuned for an even more incredible release that will include the film on Blu-ray 3D and loads of bonus features."

From director Michael Bay and executive producer Steven Spielberg, in association with Hasbro, Transformers: Dark of the Moon explodes with high-octane action when a mysterious event from Earth’s past erupts into the present day threatening to bring a war to Earth so big that the TRANSFORMERS alone will not be able to save us. Stars Shia LaBeouf (Indiana Jones and the Kingdom of the Crystal Skull), Josh Duhamel (Life As We Know It),

The Transformers: Dark of the Moon Blu-ray and DVD debut will be supported by a massive marketing and promotional campaign befitting the mega-hit status of the franchise. In addition to a multi-million dollar advertising blitz spanning television, print, radio and online, a stellar array of allies has joined forces with Paramount Home Entertainment to transmit the AUTOBOTS’ message to all inhabitants of the globe.

Hasbro will host a "Roll Out In PRIME Style" sweepstakes in the U.S. giving entrants the chance to "Win a Ride to School" with the AUTOBOTS! The grand prize winner will be picked up by BUMBLEBEE and transported to school where OPTIMUS PRIME will be waiting with TRANSFORMERS toys and products in his trailer. Details are available at www.TransformersPrimeStyle.com.

Also in the U.S., Hostess will feature TRANSFORMERS images on millions of packages and will have thousands of displays in grocery and convenience stores across the country. The company will also host a branded "Transform Your Treat" sweepstakes that gives consumers the chance to win a variety of valuable prizes. Additionally, Hostess will offer consumers a $4 rebate on the purchase of Transformers: Dark of the Moon Blu-ray or DVD with purchase of two (2) Hostess products (additional details available at http://www.hostesscakes.com). Energizer will offer coupons good for $5 off the Transformers: Dark of the Moon Blu-ray or DVD at retailers throughout the U.S. via special displays and packaging.

In Canada, 250,000 Kernels Popcorn Shakers have been outfitted with Transformers: Dark of the Moon promotional branding in support of a consumer sweepstakes tied to the home entertainment release. The Popcorn Shakers will be available at major retailers across the country.

A mysterious event from Earth’s past threatens to ignite a war so big that the TRANSFORMERSTM alone will not be able to save the planet. Sam Witwicky (Shia LaBeouf) and the AUTOBOTSTM must fight against the darkness to defend our world from the DECEPTICONS’TM all-consuming evil in the smash hit from director Michael Bay and executive producer Steven Spielberg.

Hasbro (NASDAQ: HAS) is a branded play company providing children and families around the world with a wide-range of immersive entertainment offerings based on the Company’s world class brand portfolio. From toys and games, to television programming, motion pictures, video games and a comprehensive licensing program, Hasbro strives to delight its customers through the strategic leveraging of well-known and beloved brands such as TRANSFORMERS, LITTLEST PET SHOP, NERF, PLAYSKOOL, MY LITTLE PONY, G.I. JOE, MAGIC: THE GATHERING and MONOPOLY. The Hub, Hasbro’s multi-platform joint venture with Discovery Communications (NASDAQ: DISCA, DISCB, DISCK) launched on October 10, 2010. The online home of The Hub is www.hubworld.com. The Hub logo and name are trademarks of Hub Television Networks, LLC. All rights reserved. Come see how we inspire play through our brands at http://www.hasbro.com. © 2011 Hasbro, Inc. All Rights Reserved.