All images should be credited to bwtf.com. A special thank you to JHall (Seibertron's cousin) for his rant!

"Integrating a new feature with "Micromaster" like toys called Minicons, the Transformers enter a new level of play with Transformers: Armada. Set in the year 2010, Armada continues what Robots in Disguise began: a vehicular Transformers line for 2002! Armada refers to a ship composed of Minicons that comes to Earth. The Minicons are scattered all over Earth, and the hunt begins to acquire these powerful robots! Takara and Hasbro have come together to generate an amazing new line. The Minicons were a lost faction of the Transformers and they have now returned. Each Minicon enhances the power of a Transformer exponentially."

Without further ado, here are JHall's rants ...
NOTE: The views expressed below do not necessarily reflect the views of Seibertron.com.

Deluxe Class Optimus Prime: "This is one of the figures that is actually cool from Armada. He's actually pretty close to the original Optimus but has a stocky power to him. He looks like he could tear through Megatron's ass in about five seconds. Well, maybe not THAT Megatron." 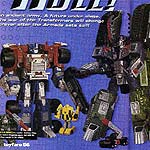 Megatron: "Hmmm ... BADASS? He looks sweet! I'm quite impressed with this figure." 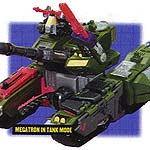 Starscream: "Screw the little whiny bitch ass from the 80s, this guy is ready to kill! He looks like he's fast, sleak, and he has a BIG sword. Not to mention missiles and a little race car for his Mini-Con." 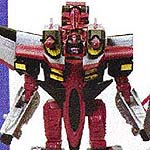 Red Alert: "That poor little SUV turns into what? Another victim of the "Proud to show my parents that I don't have any hands" club. I don't know what to say about this guy - I'm baffled. He was better off as a repaint the first time around. The "new" Red Alert has a bigger ass than Jennifer Lopez! Where's Sir Mix-a-lot someone?" 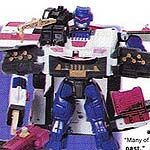 Big Prime: "I come from Victory. I'm a Michigan Wolverines fan. I have the ripped off head of Piranacon and made it into a helmet. Might this be the weird Silence Of The Lambs serial killer of the Transformers?" 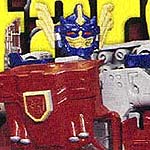 Perceptor: "There're GoBots that I could have a bigger sentimental attachment to than Perceptor. I don't even know what to say. I got off the couch for this? Someone got paid to design this guy? My four year old nephew has come up with better robots out of his legos with more articulation than this guy. It's a good thing that Michigan has deposits on pop cans because otherwise I wouldn't waste money on this guy." 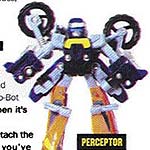 Hot Shot: "Hello, Mr. Bond. Welcome to the 5th Element! I hope to God the middle of him fits together better than Toyfare's picture." 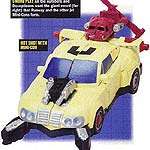 High Wire: "The same group of people that created the new Megatron had the balls to create a Transformers that looks like a rip off of the Farfiknugen guy? WTF??? Scooter from GoBots had more thought put into him than High Wire. All right guys, I've got a cool idea for a robot: he's a stick with a wheel on his hand and we'll give him a big red spot for a face. Hey, it worked for 7-UP! Wait a minute - I think I've seen this guy before in PlayMobil City Land!" 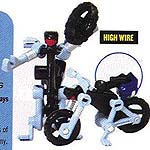 Grindor: "I hope the guy that designed Grindor got deported. What the hell is he suppose to be? A skateboard? Is this a leftover from the Action Masters??? (Staring in complete bafflement)." 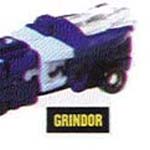 Demolisher: "Look ma! No hands! But I've got guns! You can definetly tell this guy is going to be a pain for the Autobots. But watch out, Demolisher, if you get kicked in the shins - you're going down! Maybe that's what "Skateboard" Grindor is for - the Autobots'll just throw it at his shins!" 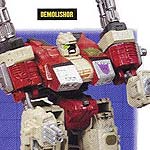 Cyclonus: "Straight from Hasbro's Playskool line: Cyclonus. Unicron just turned over in his grave. I don't know what else to say. Hold on, I'm sure I'll think of something after I finish praying to the porcelain god." 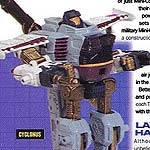 Wreckage: "Hello boys n' girls. In this week's Happy Meal you get a piece o' shit figure named Wreckage. This must be from the defunct McDonald's Happy Meal line. Get a hint Hasbro - if McDonald's didn't want to do it, why should you?" 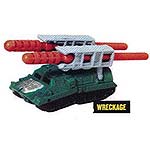 Runway: "I turn into "part" of a sword. I'm not even cool enough to be the whole thing. This is the Gestalt idea gone bad." 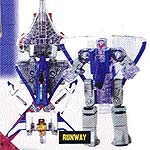