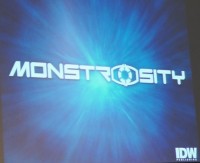 During IDW's panel about their digital comics today, they announced the sequel / follow-up series to the popular Transformers Autocracy series. The title will be called "MONSTROSITY". It will be available initially via digital download. The series will make its debut in January 2013. The same creative team will be involved with Monstrosity with Chris Metzen and Flint Dille handling the story and Livio Ramondelli continuing with his beautiful and unique art style.

The premise of the story, according to writer Flint Dille, is ... "Now that they have freedom, what do they do with it?"

Sorry, meant before. Ok, this clears it up, thanks!
Re: SDCC 2012 Coverage: IDW announces Transformers MONSTROSITY (1400759)
Posted by craggy on July 14th, 2012 @ 4:29pm CDT
hmm. the "now that they have their freedom" line and the title, makes me think this could be about the Monstructor bots, but I'll admit ignorance at what their current status is. if it is just a straight up sequel to Autocracy, I've no idea what it could be about, unless it has Quintessons/Sharkticons in it. Maybe the titular monstrosity will be more metaphorical? It could be going all Metal Gear Solid existential on us, looking at what the Autobot/Decepticon war does to their planet?
Re: SDCC 2012 Coverage: IDW announces Transformers MONSTROSITY (1400766)
Posted by Va'al on July 14th, 2012 @ 4:49pm CDT
That's what I thought it meant: freedom from the "Autocracy".