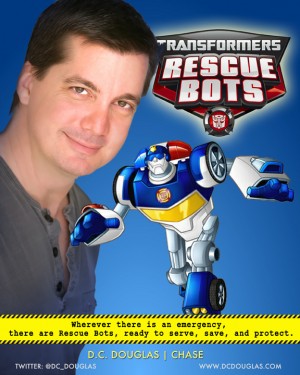 D.C. Douglas, voice of Chase on Transformers: Rescue Bots, joined the Best Damn Video Game Podcast to talk about Rescue Bots, his voice acting career, and more. (Please note that there is some language and adult discussion in the video, so be aware if you choose to watch from work.)

Douglas gives a great overview of Rescue Bots, and how the show is a great introduction to the Transformers universe for young kids. He mentions that on Rescue Bots, there is no death, destruction, or Decepticons, which is an issue for some people. But he feels the series is a great start for young kids who are not quite ready to see the conflict of some more mature Transformers series, to get them interested in the franchise. But, Douglas says, Rescue Bots isn’t necessarily just for kids.

Once you’ve watched like, 3 episodes in a row, you kind of like, get into it, you know it’s like, for a 6 year old, but ah… the writers write the show...for what makes them laugh. So it’s stuff that works for kids but it ALSO works for adults.

D.C. Douglas talks about voice acting, and knowing that he wanted to be a voice actor as young as 7 years old, and became involved in community theater by 11. By age 19 he was in Hollywood doing auditions, where he met with a woman who he believed was auditioning him for an acting workshop. He was actually auditioning for a voice-over workshop, and the woman told him that he should consider studying voice acting, as it would help every facet of his acting. D.C. took her advice and studied voice acting, and made an effort at on-screen acting. After some time of small parts and extra roles, Douglas got into a group that handled crowd noise for commercials and the like, and he then segued into a variety of other commercial work, which evolved into anime work. He started doing some work in video games, becoming well known for Resident Evil and Mass Effect, among others.

He goes on to discuss how he ended up doing the video game voice acting he has done, as well as some motion capture work. Douglas covers a range of topics including how he feels about and relates to his fans, charities he likes to work with, what his life was like growing up, and more. Douglas also shares his advice for advice for aspiring actors, or people who are interested in voice acting:

If it’s your dream, and you want to do it, do it no matter what anybody else says. It’s, it’s-you don’t know how long you’re going to live. And so money is never a guarantee, you will figure all that stuff as you go...

The video is a little over an hour, so take a little time and give it a watch.