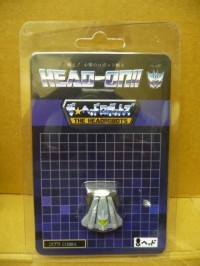 Cybertron.ca member Dark Rage has received and reviewed a "preview sample" of the newest 3rd Party manufacturer Headrobots depute figure "Cobra".
We give you a small glimpse of the review in question to see the full review simply click on the image!

Packaging:
It comes in a clear one-piece plastic card that is re-closeable and comes with no tape (No problems for MISBers). Mine came with the design that is an homage to original G1 Decepticon boxart, and the back mimics the original back boxart of the original 6 rare exclusive headmasters. It comes with English and Japanese text. Heck, even those silly points are in the back (bottom left).

Item
Material:
This item is very well made IMO, with a nice matt finish to most of the plastic surface. The eyes and visor are painted in yellow and does look a bit light.
The colours are just 2 tones of grey, but again, it will differ from the final product (stated to be a grey and khaki colour combo, can be seen on headrobots' website)

Posted 2 days ago
News Categories: Toy News, Movie Related News, Cartoon News, Comic Book News, Site News, Rumors, Event News, Digital Media News, Collectables, Sponsor News, Game News, Site Articles, Store News, Company News, People News, Press Releases, Sightings, Reviews, Unlicensed Products News, Auctions, Transtopia, Interviews, Knock Offs, Collector's Club News, Editorials, Heavy Metal War, Podcast, Contests, Book News, Top Lists
Click here to post your comment about this news story!
Re: Review of HeadRobots Cobra (1050027)
Posted by mechabooks on February 23rd, 2010 @ 1:37pm CST
I'm really interested to see the finished product. I don't have any headmasters but if its cool enough, I might have to go out and by a headless one!
Re: Review of HeadRobots Cobra (1050100)
Posted by Rated X on February 23rd, 2010 @ 5:46pm CST
This thing is just plain ugly. I dont understand why they didnt just use the original headmaster mold and make slight changes to avoid copyright infringment. Why animals ??? They say this was a long lost hasbro design pulled out of a crypt. Maybe there was a reason it was voted out back in the 80's...
Re: Review of HeadRobots Cobra (1050104)
Posted by Mkall on February 23rd, 2010 @ 5:58pm CST
I have no Headmasters figs, otherwise I'd buy this in a nanosecond.
Re: Review of HeadRobots Cobra (1050118)
Posted by DavidT on February 23rd, 2010 @ 6:32pm CST
Whats up with the yellow/green on the face? Are these hand painted or what? Alot of runover around the edges...

DavidT wrote:Whats up with the yellow/green on the face? Are these hand painted or what? Alot of runover around the edges...

DavidT wrote:Whats up with the yellow/green on the face? Are these hand painted or what? Alot of runover around the edges...

I'm guessing its because it's a "preview sample" I'm hoping the paint app gets cleared up before the final product. it's nothing i'm going to cancel my pre-order over. I can't wait for the next releases!
Re: Review of HeadRobots Cobra (1050153)
Posted by icenemesis on February 23rd, 2010 @ 8:11pm CST
hmm... I wonder if headmasters will make a classics v3 appearance. we got Nightstick with Cyclonus so one can only hope. As for the cobra...pass.
Re: Review of HeadRobots Cobra (1050331)
Posted by Doctor McGrath on February 27th, 2010 @ 1:34pm CST
This is a pretty nice looking figure. I don't have any of the headmaster figures for this guy but I am hoping to see more about the Hardhead/Iguana mold..