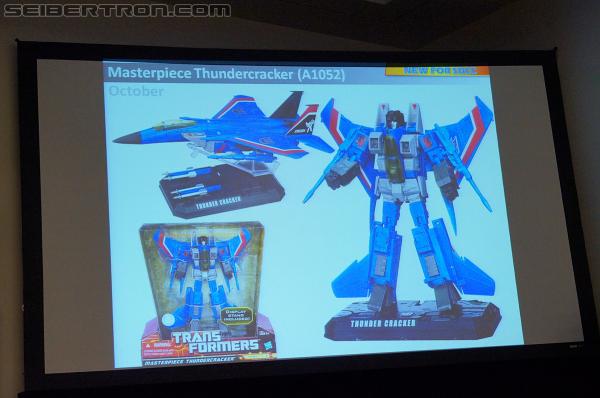 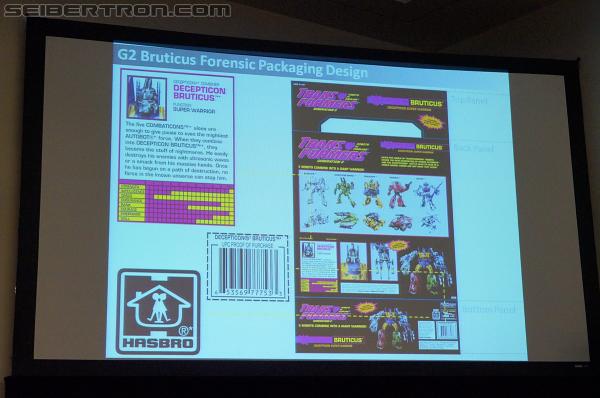 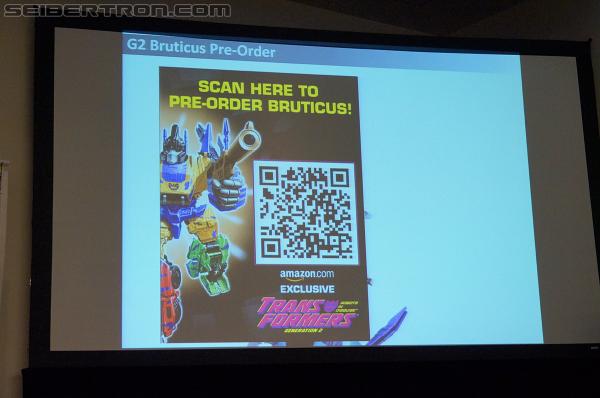 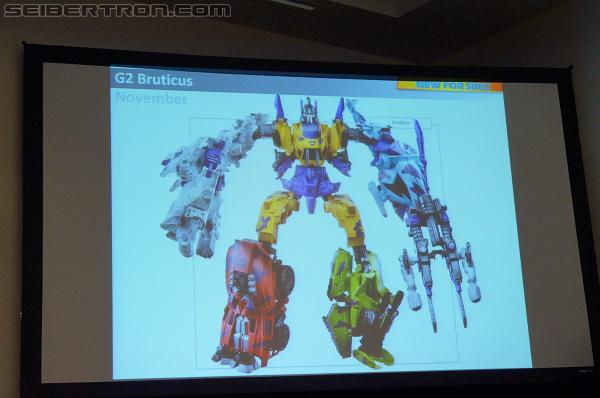 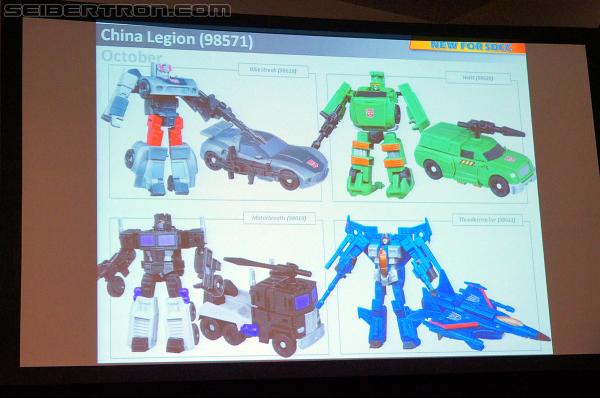 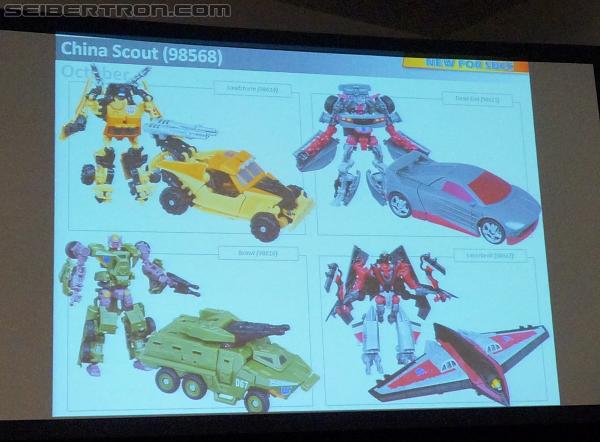 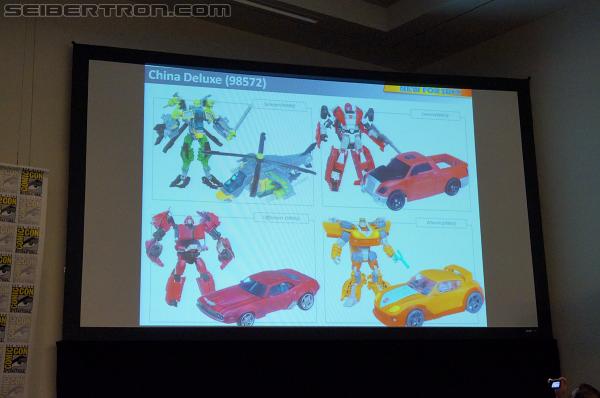 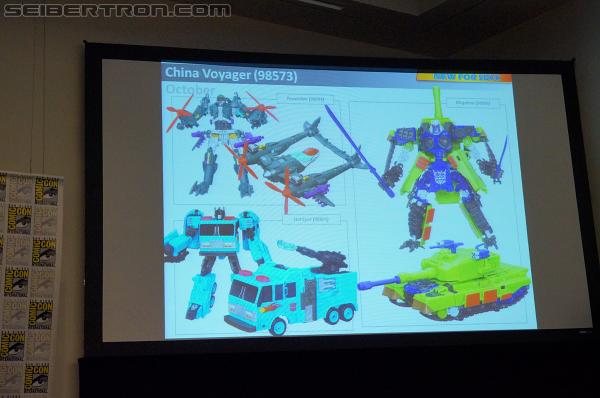 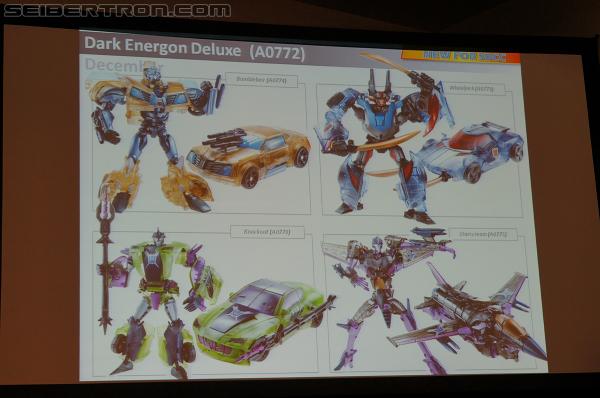 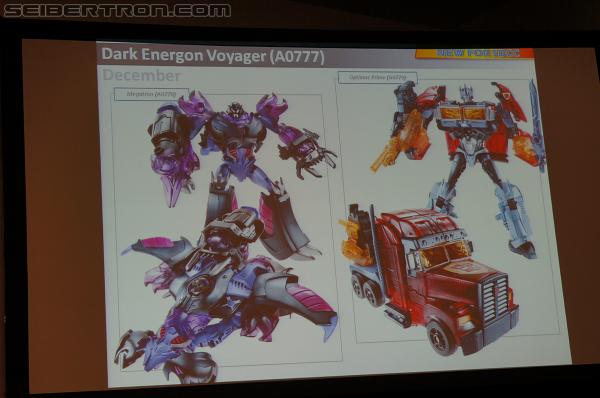 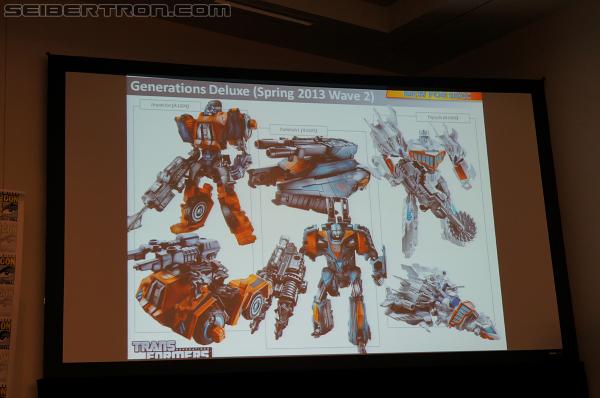 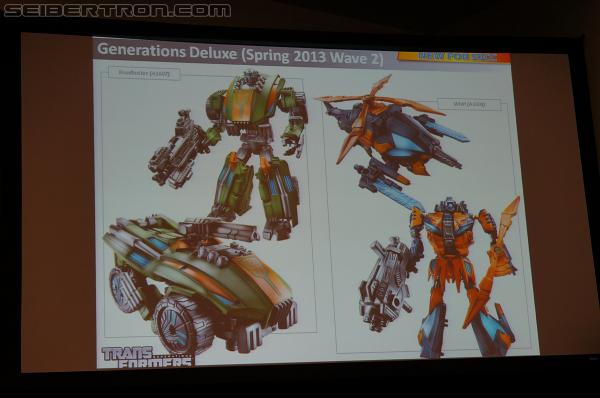 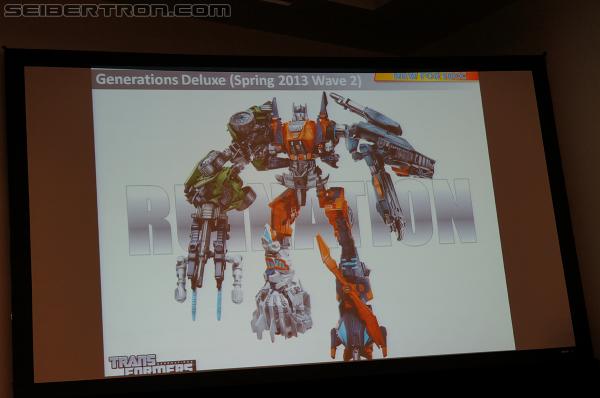 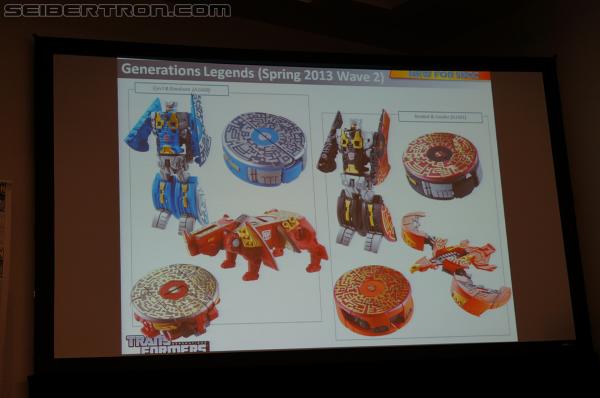 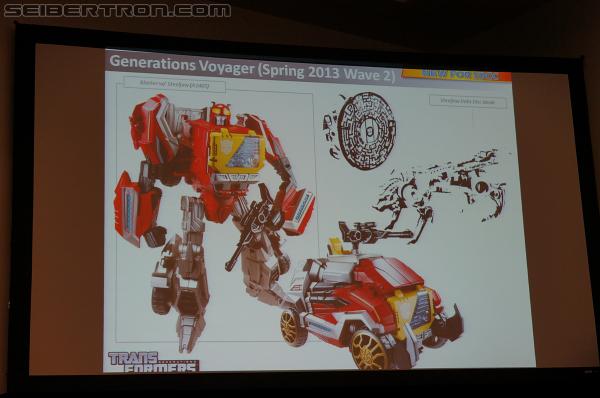 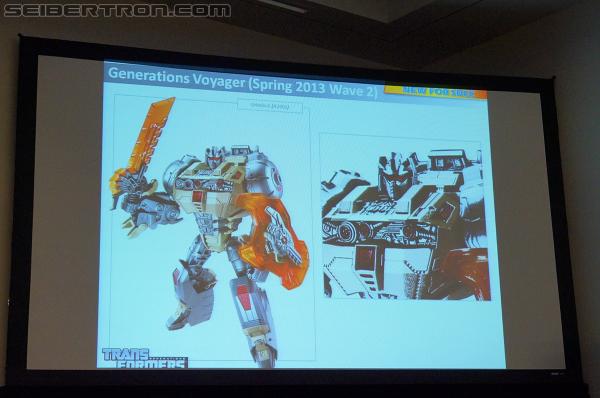 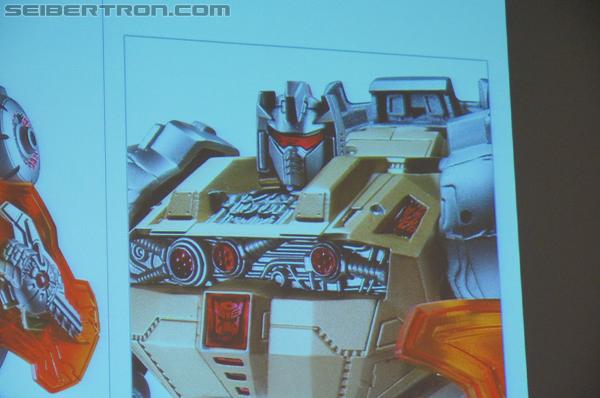 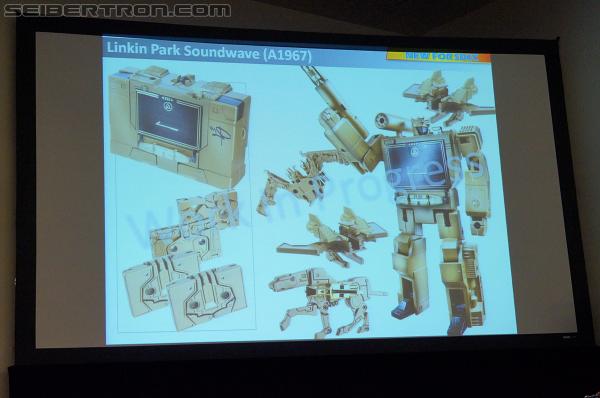 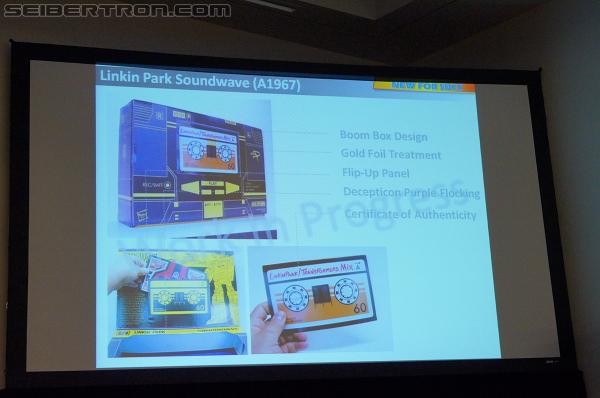 welcometothedarksyde wrote:OMG I just realised that the dark energon wheeljack is supposed to be slicer, awww yeah

You bet your ass it's awesome.

Bwa ha ha ha....I'm so stealing that.
I suppose if they do a legends class set of Fall of Cybertron we can just call 'em Little FOC'ers.
Wah Wahhhhh (sorry, that was bad).
Re: SDCC 2012 Coverage: Hasbro Panel Gallery! (1399832)
Posted by ILL-Star on July 12th, 2012 @ 6:06pm CDT
Not too happy that we're getting a Ruination made out of Wreckers, it just seems wrong. But they're still cool. As for the First Editions, I've grown content with the RID ones. Dark Energon Line, FREAKIN AMAZING. And thank the lord that GRIMLOCK is a VOYAGER! And a good looking one. These were better reveals than at Botcon! And I saw a comment that said the China exclusives were coming west. Where did it say that.
Re: SDCC 2012 Coverage: Hasbro Panel Gallery! (1399834)
Posted by TimothyR on July 12th, 2012 @ 6:10pm CDT
it's a shame that a lot of the generations we're getting are just repaints.

what a buzz kill.

grimlock looks fantastic.. but that's all i'm really excited for.

i was hoping we'd hear about voyager breakdown.. but no... maybe we'll get him after they fix their first edition mistake.

i was also we'd hear more about masterpiece figures coming to the US.. i'd much rather have those come over rather than the china after thought generations crap.

Still, that is one sexy piece of gold-chromed plastic. Any details on availability/price? I saw from another site that it will be a limited run of 2000, supposedly.
Re: SDCC 2012 Coverage: Hasbro Panel Gallery! (1399839)
Posted by MINDVVIPE on July 12th, 2012 @ 6:18pm CDT
Grimlock looks awesome. I'll be happy with my masterpiece version, but I DO want the rest of the dinobots, atleast slag and swoop. The rest is all a pass to me (except for Starscream and the Insecticon). I do like the artwork n crap on G2 Bruticus.

Sideswipe29 wrote:Still looking at ways to bring the last waves of Dark of the Moon products to retail. It's on their radar. "Stay tuned."

GreaserHHR wrote:Based on the Ruination pics, does this mean Bruticus is Scramble City style?

Asia Deluxes coming to the US? That's super awesome. Very happy about that. Will definitely grab a Springer and a Swerve, maybe a Powerdive too.

Wreckers Combiner? It's a very silly idea but I can see it working. Should have been Rotorstorm, Pyro and Ironfist instead of what's there, who really needs yet another Whirl or Roadbuster? Glad they're using characters old school fans will love, especially the first figure of Impactor. Won't buy them, but I'm glad they're out there. A little concerned that there's a fourth repaint of these guys before they even hit shelves but the fans seem to love it.

First Edition re-release? Good idea, sucks for people who bought them at marked up prices already but I'll grab a Starscream and a couple of Vehicons since the PRID one is so hard to find.

G2 Bruticus box? YES YES YES. That stuff is amazing. Not only is this the cheapest way of getting the 5, it's the coolest colours and now the coolest box.

Dark Energon? Love the Slicer homage, and the Skywarp release is good for those who didn't shell out for Takara. The others don't appeal. Repaints of Megatron in purple and black bore me to tears.

Blaster looks really nice. I hope they don't wimp out and make his colours "grittier" before release, I really dig the bright red and yellow. I like that the "tapes" are getting released individually even if it makes it harder to catch them all. This is exactly what Legends should be for; figures that are supposed to be small instead of tiny neutered versions of characters that have larger, more-functional, better-scaled toys.

Grimlock seems a little redundant. There are already at least three good G1-verse toys of him that turn into a T-rex. What a waste. Would rather get Sludge or Snarl, they've been pretty shortchanged since the Action Master days.

I might be in the minority here, but I think the retooling of the Combaticons into the Wreckers is a stroke of genius! They look awesome, can't wait to get them.

Voyager Blaster looks great too, and I too would love to see this as a Deluxe repaint as well!
Re: SDCC 2012 Coverage: Hasbro Panel Gallery! (1399855)
Posted by RiddlerJ on July 12th, 2012 @ 6:44pm CDT
I can't tell. Is that Twin Twist and Topspin among the Wreckers? It'd be nice to see them revisited.

I'm with everyone else on this. Grimlock is nice, but the other Dinobots are long overdue for some love. I want the other two Insecticons to return as well.
Re: SDCC 2012 Coverage: Hasbro Panel Gallery! (1399856)
Posted by LOST Cybertronian on July 12th, 2012 @ 6:45pm CDT
It's awesome that I wont have to import the Asia exclusives. Sucks that I paided mark up prices for the first edition figures as I had absolutely no faith in Hasbro to re-release them. Same goes for DOTM Wheeljack and Soundwave if they end up coming here. I haven't bought a deluxe Leadfoot so that would be cool to release.
Click here to view additional comments about this topic at the Energon Pub Forums ...