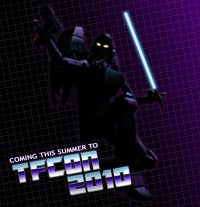 Seibertron.com member UltraPrimal has informed us that the Canadian Transformers fan convention TFCon will have an exclusive this year. Just like the previous year this year's exclusive is made by an unofficial 3rd party company.
The figure will be Nightbird the female Ninja robot from the G1 episode "enter the Nightbird". As you can see it appears to be based of Impossible toys long awaited T.R.N.S.-01, or in other words Arcee with a new head and sword.

TFCon will also offer a non attendee pack for any one interested in the exclusive who might not be able to make it to the event.


This looks more like crossover. Darth Arcee with a lightsaber?

Mykltron wrote:But Nightbird didn't transform, nor did she have a backpack.

Springer was a helicopter and Arcee wasn't ever a spider. Con exclusives don't always give the most cartoon-accurate representation of characters.
Re: TFCon exclusive: Nightbird! (1070013)
Posted by Mindmaster on May 2nd, 2010 @ 6:28am CDT
Is it just me, or does her back thingies and chest look like another feminine Transformers tahat we've come to love/hate? That's right, I'm talking about..... Optimus Prime. Ha, you thought I'd say something different, didn't you?! Alright, I'll tell you who it is. I'm pretty sure its a repaint of Impossible Toy's Arcee

Re: TFCon exclusive: Nightbird! (1070014)
Posted by HighPrime on May 2nd, 2010 @ 6:30am CDT
Dammit.. looks like more money magically disappearing from me wallet. If this didn't transform, Nightbird would be a big fat pass for me...

I hope Impossible toys doesn't turn around and announce an "Asian Market" exclusive Nightbird with a slight repaint (and no TFcon sticker...whoopee) like FansProject did last year.

Star Wars : Clone Wars Animated, right? Why do you ask? Don't even dare say Nightbird reminds you of her... I'll send the East Cybertron Trading Co. to assassinate you if you say yes!

TM2Leviathan wrote:I can tell by the pic that its a retool of TFA Arcee

Rated X wrote:If I remember correct, Nightbird didnt transform into anything. Why use an Arcee body ??? Just make a accurate figure like they did the Quints and Kremzeek. No need to be lazy...

1 - Because they already have plans for an accurate version. You can preorder it here. http://www.bigbadtoystore.com/bbts/prod ... ode=retail It's been on endless delay, though.

2 - I suspect to increase returns on their 'Arcee' mold investment.

I'm sure there are other reasons as as well