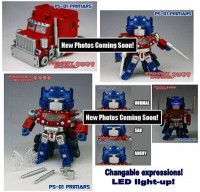 Greetings SourceFans!
Can you say RESTOCK? This week we have many new restocked items like the popular BTS-03 G1 Prime Matrix of Leadership Upgrade Set, and almost 30 hot items sold out for some time now, from Encore Omega Supreme, Sky Lynx & Thundercracker/Skywarp set, to Device Label Blaster, Disney Label Mickey, Perfect Effect PE-01 Shadow Warrior, SDCC Classics Nemesis Prime and lots more! We also have a ton of new third party preorders from TFC Toys, Perfect Effect and iGear! We asked which figures you wanted us to restock and in addition to others we already restocked on the list, we just added dozens of new and loose Classics and Universe figures on the site! Over 100 figures, many never before on TFsource, so head on over to TFsource.com to grab these great New Recruits and we'll keep working on the rest of your restock wants!
In this issue of SourceNews:
1. BTS-03 G1 Prime Matrix of Leadership Upgrade Set - Back Instock!
2. TFsource Restock!
3. Crazy Devy Update!
4. New TFC Toys Custom Figures Preorders!
5. New Perfect Effect Preorders!
6. Now up for Preorder at TFsource: iGear H01, H02 and H03!
7. New Recruits!
8. TFX-04 Protector Trailer now instock!
9. Headrobot - Blood the Dark Warrior Upgrade Kit Preorder Up!
10. New WST Coming!
11. Transformers 2010: Predaking reissue Now Instock!
12. Newest Instock items at TFsource
13. Newest Preorder items at TFsource
_____________________________________________
1. BTS-03 G1 Prime Matrix of Leadership Upgrade Set - Back Instock!
A lot were looking for this item as it sold out quick once released. Back instock, a great and affordably priced custom kit to pick up and spruce up your G1 Prime!

CDMW-16 Sea Brigade Power Parts - Custom LED Head
We just received in Crazy Devy #14 & 15 as well as a restock of many popular and prior sold out crazy devy pieces. We'll be updating the site shortly, but the CDMW 14 & 15 look great and we'll start processing and posting out preorders promptly. Click here to view the Crazy Devy section of TFsource.com.
Now Instock: CDMW-14 The Kings Power Parts Giant Sonic Sword! 227mm long of power, this word will allow your bots to pack a big punch!

CDMW-15 The Kings Power Parts - Pair of Giant Foot Plates
CDMW-10 is back instock! Just in time for the Predaking reissue arriving in our warehouse, likely on Monday! Pick up both while you can, CDMW-10 it is not likely we will be fortunate to pick more of up again.

CDMW-10 The Kings Power Parts - Custom Head
Now up for Preorder: CDMW-13 Aviation Brigade Power Parts! Devy brings your bots to the next leve with this add-on set! Included is a Custom Blast Shield, Large size Discharger Rifle and Bonus Face Plate! Set for a January release - preorder up now!

CDMW-13 Aviation Brigade Power Parts
CDMW-11 The Kings Power Parts Custom Wings now instock! Included with each is a Power Plus Kit to help protect Divebomb's wings when attached. Limited stock remaining and there will be no more release of the version with the 14K gold so get these before their prices soar on the secondary market!

PX-03 Perfect Effect Backpack
PE-05 & PE-06 Rewinder & Ejector now up for preorder!
Set for a late January early February release, this dualing duo go great with your favorite Blaster figure, City Commander, or can be held by many different bots and spring to life as robotic ninjas when transformed!

PE-05 & PE-06 - Perfect Effect - Rewinder & Ejector Set
This is it! The ultimate Perfect Effect Set! Includes PE-05 & PE-06 Rewinder & Ejector, PX-03 Backpack (perfect for attaching your perfect effect figures to other bots) and the Sun & the Moon pieces - only available (currently) as part of this set! A great combo package, with 5 great pieces in all! Set for a late January/early February release.

Headrobot - Blood the Dark Warrior - Upgrade Kit
We also have a limited stock of the Headmaster Hothead remaining, this is likely the final stock we will have of this popular piece, so don't miss out!

UltraPrimal wrote:How about they restock that Shadow Scyther set of theirs? That would be nice.

Only six hundred were made, and only three hundred were shipped to TFsource, so, not to be a buzz kill, but I kinda doubt that'll happen, but keep your fingers crossed, cause maybe with enough requests Fansproject might just re-issue him.