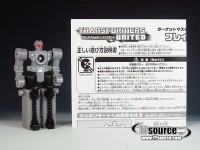 Greetings SourceFans!
This week we have new preorder and instock items from iGear, including preorders for Bee 01 and Bee 02, along with new color pics for the iGear Kup 01 heads. We now have the iGear Masterpiece Prime heads instock as well as Popular Perfect Effect items! New preorders for Crazy Devy, Transformers 2011 Wave 2 Generation figures en route to the warehouse, and a popular item restock on the site! All this and more, in this weeks SourceNews!

Just in! CDMW-13 Aviation Power Parts and a big restock of many popular Crazy Devy pieces! Updated on the site shortly, many great pieces including CDMW-02*, CDMW-09, CDMW-11 and many more. For any preorders, we will start processing orders tomorrow!

We'll begin processing preorders shortly, and if you didn't preorder now these guys look great, so may want to reconsider picking them up. We also received a restock on the PE items, it may be our last restock on these guys, so have at them! It's unclear if we will be able to restock several of the items again.

Transformers United Figures, Encore #01 Optimus Prime, Encore #12 Metroplex, Henkei D-03 Astrotrain and dozens more popular items just arrived in our warehouse! If you've missed out on any of these, they're instock now! We also won't likely be able to restock the united, so you may want to snag these while they are available. They're mighty popular and in short supply in Japan atm.

TFSource.com - Your Source for Transformers United!

This Targetmaster partner to Scourge was a store exclusive that sold out in less than an hour in most stores. TFsource was lucky enough to find one store with stock, and brings this hard to find figure stateside. Although not cheap, they are sold out everywhere, and your Generations or United Scourge figure will finally be complete!

Each of these fully transformable toys change from car to robot and back! Set for a March release, preorders available now! Note: Pictures are hand painted prototypes, actual product will vary from pictures shown.

Two heads: one with cigar and one without are included in this great set! Perfect for the grizzled sergeant himself, these 3rd party customs also include an ABS storage box that can sit in Kup's truck bed!

A great animated look to add some new flavor to your Prime. MP-01, MP-02, MP-04 or MP-04S could all use some freshening up and these new prime heads may just do the trick! Additionally we got the absolute last stock of iGear's IG-TF007 Computer Control Center so if... you have been holding out, despite the assembly issues you may want to pick this one up

En Route to our Warehouse: Transformers 2011 Wave 2 Generations Figures, including the highly anticipated Sergeant Kup and Scourge! Instock shortly, we will also have preorders available for Kup & Scourge as part of next month's release of Series 3, so if you missed out you can still pick these guys up if you don't mind the delay. For those that preordered.. expect your order to ship out next week!

TFSource.com - Your Source for Transformers 2011!

These long out of print DVD sets feature the Masterforce and Victory Series, each exclusively aired in Japan back in the 80's and 90's! Two sets per series, include over 40 episodes never aired outside of Japan. Original retail was $250-300 on these each, so although not cheap originals like these are very hard to come by!

TFsource.com - Your source for Transformers DVD's and Movies!

We have added high res photography of the finished product and packaging, check it out!

We've received half of our shipment of the new wave of 2011 Deluxe Series 2! Including the popular Wreck-gar and Perceptor! We will process all preorders in the order they were received. Once all of the stock is in we'll be sure to fill all of our orders, apologies in advance for those that have delays due to the partial shipment by hasbro

Now up for Preorder: TFC EX-004 Toys Targetoids Figures! Two packs Hot Flame vs. Screamer and Opticmax vs Megazoom! Plus with TFsource Combo Pricing buy both sets and save! New Prototype photos available!

Plus with TFsource Combo Pricing, save $4.95 when you buy with the ROTF Bludgeon Figure!

We also have a limited stock of the Headmaster Hothead remaining, this is likely the final stock we will have of this popular piece, so don't miss out!

Part of the amazing line-up of Transformers 2010: Predaking reissue is now Instock! A reissue of the Classic D-78 Transformer, that featured the Predacons ready to rage carnage on the autobot forces. Razorclaw, Headstrong, Tantrum, Rampage and Divebomb are redone in all their Transformers 2010 glory!