The Return to Cybertron - The Official Seibertron.com RPG 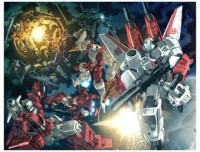 "And if so, it supports my theory that- albeit on a cosmic timescale- Cybertron is healing itself. Undoing what was done". - Jetfire, Transformers Stormbringer.


The once war torn metallic plains of the planet Cybertron are beginning to regain life! The natural resources and energon that were depleted by the ongoing battle between the Autobots and Decepticons are finally returning. Cybertron was evacuated. No one knows this new information. No one except one Decepticon scientist who stayed behind.....Thunderwing!

Having spent his time deep within the recesses of the planet, Thunderwing continued his outlawed experiments with polydermal grafting, perfecting the process on himself. Now, he's made the call to the leader of all Decepticons, Megatron, to let him know Cybertron is habitable once more. The question is, what will Megatron and his band of evil Decepticons discover when they finally come home......


Join the offical Seibertron.com RPG and tell us how this story ends. Get all the information you need to start your journey into the never ending battle between good and evil by clicking here.