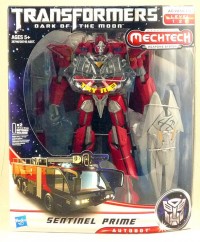 In addition to providing us with the video review for Transformers DOTM Leader Class Sentinel Prime peaugh has also posted his bio over on TFW05.

SENTINEL PRIME is a legendary warrior, thought lost long ago. The strength of his will and the power of his sword are spoken of in reverent whispers by AUTOBOT and DECEPTICON alike. Now that he has returned, the final defeat of MEGATRON and the DECEPTICONS is assured.

SENTINEL PRIME is a legendary warrior, thought lost long ago. The strength of his will and the power of his sword are spoken of in reverent whispers by AUTOBOT and DECEPTICON alike. Now that he has returned, the final defeat of MEGATRON and the DECEPTICONS is assured.


So he's definately going to get his ass handed to him and someone else will have to step up to finish the job.

Unless they take the literal route of Deus Ex Machina, in which case its probably not a good idea to put such epic spoilers on the toy package.
Re: Transformers DOTM Sentinel Prime Bio (1195363)
Posted by OlivusPrime on March 15th, 2011 @ 4:23pm CDT
Sounds like an epic character, but I just hope he doesn't upstage Optimus Prime.
Re: Transformers DOTM Sentinel Prime Bio (1195408)
Posted by BATTOUSAIXD on March 15th, 2011 @ 6:09pm CDT
I'm probably going to like Sentinel Prime, but I'll always like Megatron more, so I hope he beats the crap out of Prime (both of them actually, to make up for his beating last movie).

Re: Transformers DOTM Sentinel Prime Bio (1195515)
Posted by ben226 on March 15th, 2011 @ 8:56pm CDT
I do have to some what agree with Counterpunch. Some of these videos are poor. The camera has to be manually focused anytime we are shown close ups, the colors shift badly when it adjusts to the different colors of the figure, the table shakes when bumped and then the camera shakes, and it appears to be too close to the figures where Peaugh has to adjust the angle just to view the segment he is transforming. Haha maybe we just need to pool some money together to get Peaugh a new camera.

That aside, Peaugh I can tell your passionate about this and I DO enjoy watching your reviews. Keep it up!!

As for this figure I am not really a fan of it. The red isn't as fire engine red as I would like. He appears too top heavy. His sword looks like it is junk and the figure looks bland overall. Not a fan and I'll pass. Is it just me or does this DOTM line not really excite you? It is just not doing it for me. That is unless some better stuff comes through the pipeline later.
Re: Transformers DOTM Sentinel Prime Bio (1195702)
Posted by adiu75 on March 16th, 2011 @ 9:35am CDT
Great review. i usually watch other video reviews but i usually comment on peaugh, coz i commented once on another reviewer and turns out he was so sensitive. i didnt like his reply.

Re: Transformers DOTM Sentinel Prime Bio (1195741)
Posted by HoosierDaddy on March 16th, 2011 @ 10:22am CDT
Maybe this question is taboo, if so please forgive me, but how do a couple of these guys always get these toys so far in advance? Do they work for Hasbro or live in Hong Kong or something?

And man I'd like to know how Peaugh gets all of these figures months in advance of release. He's pretty lucky if you ask me. But I do enjoy his reviews better than others. I think he could take some lighting and camera pointers from optibotimus though.
Re: Transformers DOTM Sentinel Prime Bio (1197429)
Posted by freaky777 on March 20th, 2011 @ 12:33pm CDT
Well I already have him and Leader BB in hand. Bascially for me, I got it from one of the specialties shops in Singapore.

monstergrotusque wrote:Wasn't really into this figure for the most part but this review may have persuaded me.

Over all the bot mode is pretty sweet. Not really diggin the face though. The legs look really good to me aswell.

He's sure to be pricey at retail. Prolly the 60 dollar range just like Prime was which will make for an easy pass since i'm not completely convinced on Sentinel Primes awesomeness.

I agree with you, I've never had to "have" any of the movie figures, nor did I care for their look, but this one looks great AND movie accurate (so did that Optimus)...