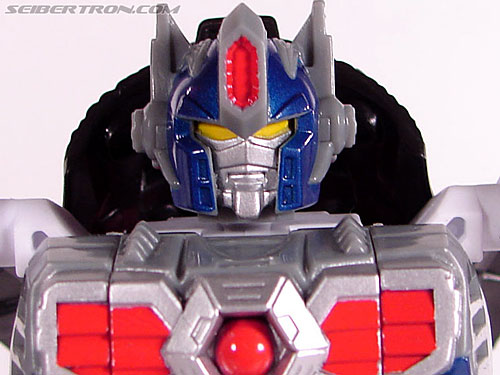 Captain of the MAXIMAL research vessel AXALON, OPTIMUS PRIMAL was forced into the role of a warrior in the BEAST WARS. He rose up to become one of the greatest heroes in the history of CYBERTRON. His fate is tied in some fundamental way to that of the mad arch-villain MEGATRON. OPTIMUS PRIMAL knows this, and understands that it is he and he alone who must pursue MEGATRON across time and space in order to put a stop - once and for all - to his evil plans.

Profile: Intelligence, experience, passion and skill are all crucial parts of what makes Optimus Primal the proven leader of the Maximal cause. He serves as an inspiration to help others find their own strength to keep fighting despite the odds. Through he began his career as the captain of the Maximal deep space exploration vessel dubbed the Axalon, his ship's chance encounter with Megatron's own rogue forces changed his fate and that of his crew forever. Forced into the role of warrior, Primal led his Maximal forces to battle Megatron's and his Predacon criminals on prehistoric earth in the "Beast WarsÂ¡Ã‰

Now at the dawn of this new age for Cybertronians, the battle against the ancient monster planet known as Unicron has begun once again, and Primus himself has awakened to combat his own age old nemesis. Unicron began his latest gambit by abducting Ttansformers from across time and space to build his own army of corrupted minions and escape his imprisonment between dimensions. Primus responded by calling Optimus Primal back from the Allspark to help in the fight for the very survival of Cybertron as its new champion. Primal proved himself against impossible odds once again in his first rescue mission into the heart of Unicron, where he freed dozens of imprisoned Cybertronians who were in danger of becoming Unicrons' latest minions. Primal returned safely with many of the rescued forces safely to Cybertron, where with Alpha Trions help, he began to organize an aligned Maximal/Autobot: fighting force to battle this new threat

In the meantime, Optimus Primal led the lengthy campaign that battled against Unicron on numerous fronts. First, he took the fight back to Unicron, on many occasions, valiantly fighting to free more Transformer prisoners from multiple prison cities within Unicron. Primal also took the lead in various multi-dimensional missions where his forces often tried to protect targets of Unicron's forces from being taken from their home, all the while attracting additional Maximal and Autobot forces to join his cause. However, these battles had a high cost. Primal and most of the other members of his team, who had been reformatted by Unicron or contaminated by the repeated exposure to the nanotech "Unicron virusÂ¡Ã‰; suffered through a debilitating mental and physical condition which worsened with time. Eventually, Primal and several of his Autobot comrades needed to be completely reformatted by Primus or risk madness and eventual deactivation. In his new form, Primal was rejuvenated, and he redoubled his efforts to lead the counter offensive against Unicron's own generals.

In the months that followed, Primus and Unicron's armies swelled, and larger battles not seen since the days of Cybertrons Great Wars became common place again between the Primus's defenders and Unicron's hordes. Although news of conflict had spread across Cybertron, the Maximal ruling body had managed to contain and control any threats to the order and political stability among the general civilian population of Cybertron up until that point However, all this fell apart when the council itself fell victim to the deadly invasion of Unicrons' hordes across Cybertron that became known as "the Culling." In the carnage that followed, Unicron consumed the spark energies that were snuffed through his minions to further repair himself. Primal's forces were instrumental in the counter attacks that successfully routed the invading armies, but the general population of Cybertron was death a grievous blow. Amidst the chaos, Optimus Primal's arch foe, Megatron had also resurfaced, assuming a lofty position in the Predacon military hierarchy. Once Megatron had returned, he wasted no time in plaguing Primal as the two resumed their seemingly eternal struggle. However; more recently, Megatron, has called a truce with Primal's forces so that they might better unite Cybertron's remaining forces under one banner and win this war against the forces of Unicron once and for all. Optimus knows, even if they are successful in this latest campaign against Unicron's forces heÂ¡Ã‡ll still have to contend with Megatron when the time comes.
Abilities: Optimus Primal represents a uniquely powerful fusion of Maximals' advanced technology with the raw power of their mighty Autobot ancestors. In this supercharged form, Optimus Primal possesses unmatched strength among the Maximals, putting him on an even par with many of Cybertronians mightiest Autobot defenders. His heavily armored hover board platform gives him flight capability in both modes at a variety of altitudes and even in the vacuum of deep space. He has grown to be an accomplished "sky-surfer" with this new hover board and can execute a variety of expert maneuvers that make him a hard target to hit in the air He can maintain a comfortable cruising speed of 225 mph for distances exceeding 5,200 miles under a normal fuel cell, and dramatically increase power output for brief periods if need be. The board also doubles as his main offensive weapon, and can fire high yield Energon missiles from the main battery. In robot mode, he can also wield the board as an over-the-shoulder mega-cannon by calling upon the power of Primus directly to give his weapons systems a dramatic power boost (through the arcane use of 'Cyber Key" slots that he came across in his inter-dimensional travels).
Additionally, energy receptors allow him to absorb much of the damage from energy based attacks and rechannel it back at his enemies through his hands, as well as increase his own power output. In his gorilla beast mode, Primal possesses incredible agility, superior manual dexterity, and increased upper body strength. His reformatted body is now completely immune to the nanotech Â¡ÃˆUnicron virusÂ¡Ã‰ and accompanying "Unicron radiation" that plagued his internal systems before. As such, he can operate normally in the hostile environment within Unicron's subterranean levels indefinitely.

His chest compartment houses the "Matrix of PurificationÂ¡Ã‰, a gift from Primus itself in the struggle against Unicron's corruption of the children of Primus. Through its use, Primal can heal/reformat the sick, and most importantly, erase the stain of Unicrons corruption from Cybertronians whose minds and bodies have fallen under the Choas Bringer's sway. Pnmal has a limited form of spark telepathy as well, allowing him to potentially reach out to those who may, deep down, struggle to be free of Unicron's control. Thanks to Primal's continual efforts in training to further develop his natural spark telepathy abilities, he's been able to successfully reach many of the 'Minions of Unicron' who were thought to be lost forever. In combination with the extraordinary spark purification powers at his disposal, he's managed to save countless Cybertromans from a fate worse than deactivation, and return them to their native states.
Weaknesses: While Optimus Primal has no known physical weaknesses, his nobility and compassion for others could conceivably be used against him by some of his more ruthless enemies.
[ Back To Top ]