Springer whispers something to Razorclaw 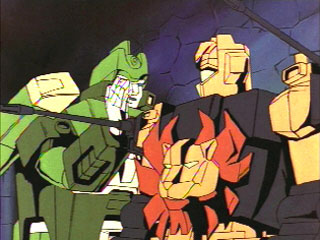 65 captions have been posted for this image so far ...

Sigma Magnus writes: "Hey, wanna buy some drugs?"
Tracks85 writes: Excuse me sir, your balls are showing. Bumblebeetuna
gema writes: Springer : Heard you're going for an audition of Transformers:Beast War.
Razorclaw: Yeah, who else u expect they'll cast
Suzuki writes: SPRINGER(whispering): I play with my toys in the toilet . . .

RAZORCLAW: . . . Why are you telling me this?
egarton writes: hey were you in the Lion King?

Yeah only as Mufasa's double.
Roadshadow writes: Arcee ****ed Ultra Magnus, pass it on.
gauthic_angel7680 writes: Springer: Galvatron thinks you boned him last night then made off with is stash.
Razorclaw: Yah I did, but the stash was just a few ounces of crack. Man I was wronged.
DarkDranzer writes: Springer: I don't know about you but I seriously HATE the new director I mean make me a KNIGHT in Danny's DREAM?

springer;come on...you don´t smell THAT bad.
LunarFormer writes: Springer: Hey, Razorclaw... why the heck do you have rifles on your shoulders?

Springer: o...k...
Marv writes: Mr. Claw! Loved your preformance in "the Lion King"! Could I get your authograph? Oh, not for me, for my little brother...
Greg writes: Have You Seen My Gun Anywhere?
Mest4life135 writes: "pssst ur mom is hot"
"i know really?"
"WHAT?! ur supposed to say 'ew dude shes my mom' no frucken 'i know really' dear lord u are......o nvm ur a robot"
Mest4life135 writes: "psst dude check out her ass"
"daaaaaaayyyyyyyymmmmmmm"
Odimus Prime writes: Springer: Pst! Razor Claw! You Know What.
Razor Claw: What?
Springer: Megatron wants to Be seeing you...
Razor Claw: ??? Am I in Trouble?
Springer: No HE Likes You!?!!
- Back to top -
Alphatron writes: Springer: Hey, Razorclaw. Did you know that Megatron once a prostitute to Shockwave?
Razorclaw: Yeah. Did you know you'll be in energon, but your name will be Bulkhead?
Springer: Did you know that I hate you now?
Psyro_Kameato writes: narrator: a fierce battle between the autobots and descepticreeps rage on as springer has his own plan to deal with them...

Razorclaw: "Nah, I'd rather just sit back and laugh like everyone else."
Bumblejumper writes: "victory Leo says he can take on you and the rest of your boys..."
Zeedust writes: Springer: "Wreck Gar says to tell you 'Scar, there's no food.' He says you'll know what it means."

Razorclaw: "Tell him I said 'It's the lionesses's job to to do
Unknown writes: Springer: Umm, Raze? Your access panel is open.
Unknown writes: "You know Hot Rod and I call Arcee 'Fingercuffs'eh." (Chasing Amy ref.)
Convoy writes: Psst! Don't look down but you've got some kind of Earth tumor on your chest!
Unknown writes: : Sadly both Razorclaw and Springer left utterly broke that night, being victems to excessesive betting. On the bright side, Cyclonus, the Sweeps, Blur, Grimlock, and Dirge all leave 3000 shannix and 10 energon cubes the richer! :
Unknown writes: : During the Elita-1-Nightbird-Arcee triple threat bra and panties match...:

Razorclaw: It started out as "your mother makes delicious cookies". I hate this broken telephone game.
Unknown writes: Springer: Pssst, you stepped on dog doo-doo, there buddy. RazorClaw: Aw, man! RAVAGE!!!
Thundercrackler writes: Razorclaw: What's that Springer? You think you should get the Matrix?
Springer: No, I was just saying that Rodimus is such a lousy leader even Maguns could do a better job and he got killed.
- Back to top -