Metroplex voice center: Do not enter 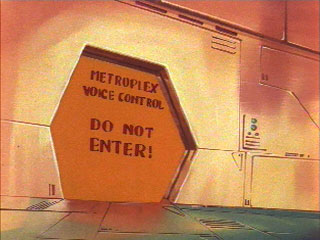 83 captions have been posted for this image so far ...

HotRod: BLURR!!!!
PlasmaRadio writes: Swingback, the transforming door, performing his favourite prank.
PlasmaRadio writes: For those of you who didnt think Metroplex's voice centre took up a whole room...
Scooter writes: So why build a door there in the first place?
Unknown writes: Ghost Starscream: Now, it's time to make Metroplex sound like that ninny Arcee. Or maybe that lil' punk Daniel. My most diabolical scheme ever! HA HA HA HA HA!
Bumblejumper writes: Makes you wish the was a ventriloquist character on the show...
Bumblejumper writes: "Oh yeah, and the voice box is the second door to the Right"
Unknown writes: Metroplex doesn't like when someone--especially a Decepticon--enters his brain area. That makes him really mad!!
Unknown writes: From behind the door,"...Livin La Vida Loca..." Now I know why it says do not enter!
- Back to top -
Unknown writes: Get out! You have no business here!
Unknown writes: One of the down sides to being a city size Transformer is never knowing just how many obsene acts are being committed in the remote areas of your body.
Unknown writes: : Optimus only hoped that no one would find this room. Most sadly Dee Dee of Dexter's Lab mistakenly thought it was Dex's lab and wrecked the place. This explains why Metroplex has a very bad case of Leringitis! :
Stone writes: The Autobots could only hope that the Decepticons would pay attention...
Unknown writes: Metroplex voice control my ass I bet this is where they keep all the unproduced Transtech prototypes.
Unknown writes: starscream has made several failed attempts at entering this room in order to stop himself from sounding like the wicked witch of the west.
Pokejedservo writes: Yes Bud Davis is quite a private fellow.
Unknown writes: Obviously, this area is off-limits
Zeedust writes: Wreck-Gar (from inside): "Hey! Where's the cream filling?"

Ultra Magnus (elsewhere offsceen): "Please tell me Autobot City didn't just say what I think it said..."
Unknown writes: So this where Metroplex does his "Barry Manilow" voice...
- Back to top -
Unknown writes: This is why Soundwave has his chiming voice.
Unknown writes: And this is where Bud Davis* lives. We can't get him to come out of that damned room.

*The voice of Metroplex
Unknown writes: Daniel (with voice amplifier): Pay no attention to the boy behind hte control console! I am the gweeart and powerful OZ!
- Back to top -