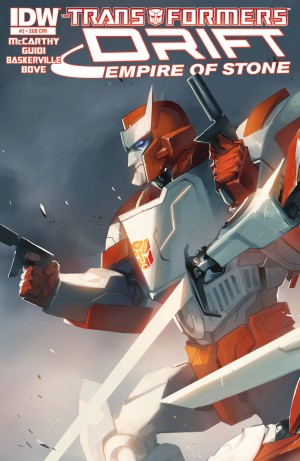 Synopsis
THE STONE ARMY! The secrets of DRIFT’S past become his present-day problems… and RATCHET’S none too happy about being dragged along!

We've arrived at the third chapter of the four-issue mini-series following Drift, after his exile from the Lost Light, and in case you hadn't noticed... Drift is an ex-Decepticon turned Autobot with issues, gone ultra good then riddled with guilt and in search of redemption - and the search leads him to a place from his past. Got it?

What Shane McCarthy brings to the table in this issue, other than some usual Animated-esque-via-MTMTE Ratchet sass, is a fairly decent twist on the situation as it currently stands, despite some predictable behaviour from the characters involved. Though the plot may have seemed clear from early on, we get a slightly different look at it by this point.

So if you're expecting a complicatedly weaving plot entwined with multiple layers of social commentary, this is not your port of call. What we do get, though, is yet some great interactions between pretty much all characters involved, some fairly twisted motivations reminiscent of 'bad guys' already encountered in this development of the IDWverse, and some very nicely staged action.

What I am still waiting for, really, is a clue as to how all of Empire of Stone will impact not only More Than Meets the Eye, as the solicits keep telling us, but also the wider Transformers fiction established at this point - and this issue, in Hellbat and the Stone Army, possibly hints at it all, at last.

If the action is greatly staged, as Guido Guidi and Stephen Baskerville have shown us in all collaborations so far, this issue really cranks it up a notch. There's a magnificent slow build of smaller to wider layouts as the action escalates, with some truly stunning full splash pages showing off the scale of what the characters are actually playing against.

Not to forget the gloriously gritty look of the book, and the stark contrast with some much sleeker, cleaner visuals for the main background characters under Gigatron's so-called command. John-Paul Bove's colours make sure those are not traits to be missed, and we should revel in his marvellous deployment of pigmented layers.

With so much action still running through so much of the issue, and the interior monologues that Drift uses to narrate and expose the story, Tom B. Long's lettering has plenty of time and space to shine - though parsimoniously used, the touches add some good voicing to exasperated characters. Cover A is a wonderfully expanded and context-free panel from the issue itself, by Guidi and Bove, while Ratchet takes the spotlight in Sarah Stone's glorious variant - see thumbnail!

The main draws of this issue, and so far the series as a whole, come down to a handful of things: first, the seriously stunningly mapped out action sequences and fight scenes, thanks to the fantastic work of the visual team working on McCarthy's script. Every issue just looks absolutely stunning and almost tangible in its grainy stoneness.

Ok, that got me

But the possibly even bigger incentive, and one that has taken me three issues to fully grasp (heh), is the development of the relationship between Drift and Ratchet, not only as a means for the former to come to terms with his own identity issues, but for both of them to grow from where they set out with that moment as Drift left the Lost Light crew.

Fellow Seibertronian chachipower returns today with another video review, and they move from Grimlock to the Fewture EX Gokin non-transforming TF-EX03 Optimus Prime figure instead! Check out the heavy hitting (and weighing) collectable action figure in the embedded clip below, or take a look at a pictorial review here. 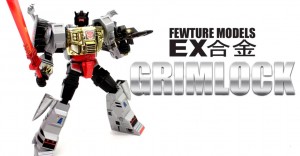 Continuing a line of very well detailed but non-transformable licensed Transformers action figures, Fewture have recently release the EX Gokin Grimlock TX-EF02, successor to the Alpha Trion we saw a while back. Fellow Seibertronian chachipower is here once more to share a video review of it with us all - check it out embedded below! 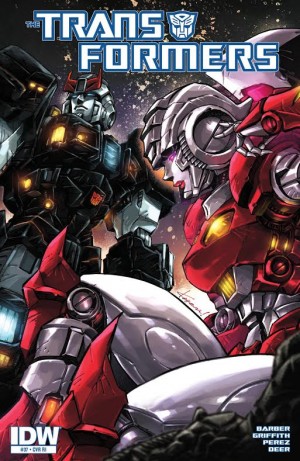 Synopsis
THE ONYX PROTOCOL! As PROWL confronts SPIKE over the human’s betrayal, the mystery of G.B. Blackrock and the Onyx Interface deepens. Meanwhile, Tokyo becomes a battleground as Arcee faces the Constructicons… and Galvatron!

In issue #36 of the Transformers ongoing, we had the different factions setting themselves like pieces on a chessboard (with chases and explosions, of course). We also found out Prowl's real - for now - feelings towards Spike, and how much the two may or may not be very similar beings. All in an effort to locate the Enigma of Combination, and prepare for the Combiner Wars event.

He gives good recaps too

And despite Prowl and Spike being once again key players in this issue, John Barber makes two other characters really shine: leader but not quite of the Decepticons Galvatron, and Autobot but not sure Arcee. Their disputes, their interactions and Galvatron's slow game are a thing to behold.

We also return to some wider concepts forming the basis to the current situation on Earth, and Blackrock's personal goals and stakes in the whole thing, but so far, not as fully realised as the robotic side of things - until the very end, that is, when the worms are out of the can.

It's nice to see a progression towards a conclusion of the arc before the beginning of the next one, without the feeling that one is being rushed or cramped for the other. Nice to see a couple of secondary characters take a little bit of light too, but the main action, because action it is, is what you're here for in this issue.

Regular artist Andrew Griffith takes the full burden of the artwork this time round, and a heavy burden it is. He performs brilliantly, too, with some fantastic panel layouts, and his Arcee and Galvatron really capture Barber's script underlying the interactions.

Effects obviously aided by not one but two colourists: Josh Perez and Thomas Teowisonte Deer, whose styles are different enough to be noticed, but without ever interfering with the artwork's aesthetic. Plus, we get some fantastic sky/ground transitions.

Tom B. Long's lettering is wonderfully placed, adding exactly what is needed to the various scenes, and remaining specifically absent in others, which is to be appreciated given their context. The covers are magnificent too, and bring in another fan artist for the 30th Anniversary cover - Kotteri (thumbnail) - alongside Griffith/Perez for A and Nick Roche/Josh Burcham for the bluesome B.

As I mentioned above, there is something still a bit slow in an otherwise very well-paced issue, featuring some wonderful action of both the verbal and physical kind - allowing a decently sized playground for the visual team to try out their skills, be they layouts, body language or colours.

What I am concerned about at this point, however, is the reasoning behind Blackrock's schemes, as well as the role that Prowl and Spike will actually play in the upcoming major arc of Combiner Wars, and what actually is Galvatron's personal gain from it all. 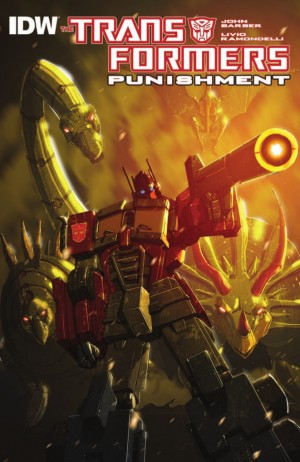 The other IDW offering for this week sees the print version of the digital motion comic Tranformers: Punishment, with art by Livio Ramondelli, and finally at the correct chronological point on the current timeline! Check out a full preview below, and head here for the Seibertron.com review.

Transformers: Punishment
John Barber (w) • Livio Ramondelli (a & c)
OPTIMUS PRIME RETURNS TO CYBERTON! And someone is killing Decepticons. PRIME teams with WINDBLADE to uncover the identity of the vigilante… but the answers will uncover darker secrets than anyone expected!
FC • 48 pages • $5.99

Bullet points:
The stage is set for COMBINER WARS!
OPTIMUS PRIME and WINDBLADE on the hunt for a killer!
Will the AUTOBOTS stand up when DECEPTICON lives are at stake? 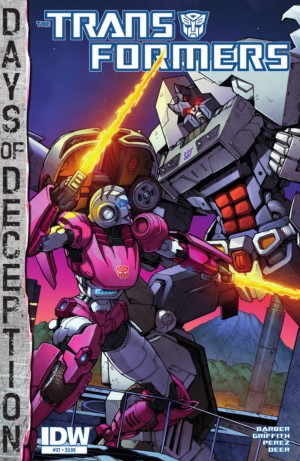 Despite delays, digital advances and other doodads, IDW Publishing offers the new episode in one of its ongoing robot comics - and we look at Earth and the Enigma of Combination in The Transformers #37! Check out a full preview below, and head back here tomorrow for the Seibertron.com review.

Transformers #37—Days of Deception
John Barber (w) • Andrew Griffith (a & c)
THE ONYX PROTOCOL! As PROWL confronts SPIKE over the human’s betrayal, the mystery of G.B. Blackrock and the Onyx Interface deepens. Meanwhile, Tokyo becomes a battleground as Arcee faces the Constructicons… and Galvatron!
FC • 32 pages • $3.99

Bullet points:
Days of Deception continues!
The stage is set for COMBINER WARS!
Prowl versus Spike!
Arcee versus Galvatron!
Variant Cover by Kotteri! 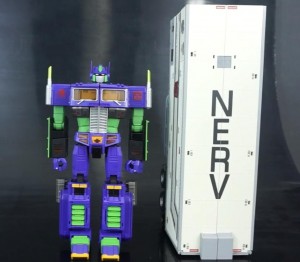 We've seen in-hand images before of the Takara Tomy Transformers x Evangelion MP-10 Convoy Mode "Eva" figure, showing off its purple and green deco on the basic Masterpiece figure. But why not take a look at the figure in this video review by fellow Seibertron.com user Paik4Life - check it out below!