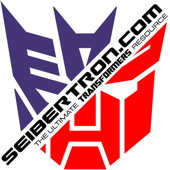 We're in the process of producing a nice Q&A session on Twincast and we're looking for your questions. You can ask pretty much anything (within reason please), like, is Ryan part Cybertronian? Or, did Counterpunch really get into Henkei because of a typo?

Twincast is looking for your questions and insights to bring you some of the best Transformers podcasts on the net. So feel free to ask and suggest away by posting a reply in the official ASK THE TWINCAST Thread.

Thanks for all your help Seibertronians.

(Also, we record at 9pm eastern time, so...there's that)
Re: Ask the Twincast: Seibertron.com's Official Podcast wants your questions! (1241143)
Posted by Mindmaster on June 16th, 2011 @ 4:00pm CDT
*Should Waspinator and Soundwave get their own Generations/Classics toys? Why or why not?

*Did the RTS brand fail because of the name or the quality of the toys?

And a personal favorite since the 6th grade...

The year is 2015, you wake up from a cryosleep to realize you've survived the events of 2012 and stumble into a decimated world where you're forced to fend for yourself. After finding food,supplies and setting up a strong hold you stumble across a toys'r'us or a pawn store. What transformer do you shed a tear when you find him/her in the remains of a shattered humanity?

Now know, I don't think anythings happening this is just for fun.

Kudos to you, dude!

My answer;
Good - The new Masterpiece toy they're coming up with.
Bad - any Marvel/Star Wars Crossover figure. They're just terrible to me.

starwarrior1227 wrote:would you watch a beast wars continuety. note: it is written by the same people from the original beast wars, with a story line that COMPLETELY ignores anything that happened in beast machines, all characters return (exlude characters that were only in beast machines),yes even dinobot and the rest of the dead bots, with their original voice actors, the cgi is updated, the story line still envolves the ark and the rest of the g1 cameos, and all characters have similar looking but still original models.

Now would you watch it if the maximals and predacons transformed into wait for it...

Ok, one more time, but I have to answer this...

2011 is the 10th Anniversary of R.I.D. What is your favorite mold from that series?

Do you expect many angry fans next year with TCC Runabout but no TCC Runamuck?

United Targetmasters Caliburst and Spoilsport, who the heck do they pair up with?
Re: Ask the Twincast: Seibertron.com's Official Podcast wants your questions! (1241400)
Posted by Bed Bugs on June 16th, 2011 @ 11:13pm CDT
What are you thoughts on the smaller fan conventions?

Do you think that the modern day Botcon has drifted to far away from what it originally was?

Pick a Botcon and/or club exclusive that you weren't really impressed with as far as mold choice and suggest a substitute mold.

Do you think if Steven Spielberg took over the reigns of doing TF Movies, do you think:

1. He would continue where Michael Bay left off or reboot?
2. That it will be better or worse than the Bay Trilogy?
3. will further splinter the fandom?


By the end of the Dark of the Moon toyline, what do you think will be the GRAND TOTAL of ALL the repaints/remolds/iterations of Movie Deluxe Bumblebee? Make an educated guess.

Do you think we will see an ULTIMATE Megatron to battle ULTIMATE Optimus Prime?

Being that Ironhide got upgraded to Leader Class, do you think we'll see Ratchet join him? If you plan on buying Leader Ironhide, are you doing so to put him with your main line Autobots, or your Human Alliance Autobots?

We have just heard about Encore Devastator being released later this year, which Encores do you see being on the shortlist as next releases? Which figures would YOU want to see on the shortlist?

There's been a lot of campaigning to get an RID Scourge out of RTS Optimus Prime from a lot of fans. It does feel like a given, who releases it (Club, Botcon, Hasbro, Hasbro Store Exclusive, Takara, or Takara Store Exclusive)?

If/when we do get Scourge/Nemesis Prime, he will be our 4th RID Classics figure (Bruticus from Cybertron Scourge, Skybyte from Energon Sharkticon and Sideburn from Classics Rodimus included). Do you think we will see more RID characters in the near future? Such as Prowl from Sideswipe/Sunstreaker or X-Brawn from Ironhide/Ratchet?

Since the release of Fracture (Crasher), Club Cop-Tur, and the Spoons homage from the movie line, there's been a distinct lack of Go-Bots homages released. Pick a homage that should have been yesterday to correct this tragedy. Cy-Kill from Wreck-Gar perhaps?

How tempted have you been by the SlagaCon exclusive Classics Powermaster Armor? Concept art enough, or do you need prototype pics to want?

Take a guess which year you think will be the year Frank Welker FINALLY makes an appearance at Botcon. Do you think Cullen will be there that year too? LULZ if he wasn't.

Which has had the more offensive paint jobs, Movie repaints or G2?

Do you think Hasbro will ever explore previous gimmicks from G2 such as Sparkers, Color Changers or Rotorforce?

That should be good for a while.

Re: Ask the Twincast: Seibertron.com's Official Podcast wants your questions! (1241518)
Posted by Counterpunch on June 17th, 2011 @ 7:27am CDT
RodimusConvoy had the last question we got to as we recorded.

Thanks for helping out. It was a really good show last night.
Re: Ask the Twincast: Seibertron.com's Official Podcast wants your questions! (1241521)
Posted by RodimusConvoy13 on June 17th, 2011 @ 7:30am CDT

Counterpunch wrote:RodimusConvoy had the last question we got to as we recorded.

Thanks for helping out. It was a really good show last night.

Birdiebot wrote:I am new into collecting. What should I get first, and what should I avoid?

We will definitely hit this question up next time around.

Optimutt wrote:1. I've lsitened to all 22 episodes so far and have noted the changes that have been going on. While I think it's good to have a revolving group, I can't help but wonder: What happened to the originl Podcast line-up?

2. Do any of you frequent any other TF fan sites? And if so, which other sites would you recommend?

1. Thank you for listening. It's a lot of work, but it's worth it when we get feedback. Skice is pursuing his own podcast, you can look it up on Facebook at "The Electronic Information Show". Pyro has been busy with life, but is always welcome back. Savage has been similarly busy.

Hopefully all the changes have been improvements and you're continuing to get better shows and productions.

2. I am on all the major TF sites except maybe TFormers because I just really dislike their forum format. The dudes over in the TFW toy and video game forums know me fairly well and I lurk at AllSpark on occasion. Other TF sites? Fred's Variant Pages. The site is down, but people have hosted parts or all of it and it has the most insane collection of variant info and odd bits of history. Check it out.

3. Do you expect many angry fans next year with TCC Runabout but no TCC Runamuck?

4. United Targetmasters Caliburst and Spoilsport, who the heck do they pair up with?

2. Rail Racer. If that doesn't count because it's three, then Prime.