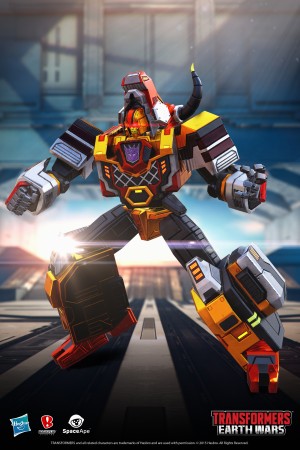 Our latest exclusive artwork content from the folks over at Space Ape - behind the soon-to-be-released Transformers: Earth Wars mobile game - come in the form of one of the Predacons: Tantrum! Read up on his bio in the game below, and check out the sweet render.

Tantrum would rather crash right through a problem, then stamp all over it, rather than apply reason or logic. Get in his way, annoy him, or — if you're an Autobot — just exist, and his overheated rage is a sight to see. Steam literally puffs out of his nasal ducts before he charges. These chronic fits of anger may be down to a loose connection somewhere, but no way is Tantrum letting anyone mess with his head!

mattwhite924 wrote:Is it just me or does that look like it was heavily based on Mastermind Creation's Bovis?

Colors are different, but there's a lot of details that seem way too close to be a coincidence.

That was my first thought. The hip pouches were a dead giveaway, and the robot head set in the Bull's bottom mouthplate.

I was wondering how Hasbro must've liked them using MMC's design for the character.
Re: Character Bios - Transformers: Earth Wars Tantrum (1792898)
Posted by ebonyleopard on May 26th, 2016 @ 9:09pm CDT
I too thought it looked like MMC's figure, but then hey, heh what can they say? It's not like they can complain since they designed it after Hasbro's IP, which Hasbro has been officially ignoring. Them's the breaks.
Re: Character Bios - Transformers: Earth Wars Tantrum (1793845)
Posted by D-Maximal_Primal on May 31st, 2016 @ 11:02am CDT
Courtesy of our friends from TRANSFORMERS: EARTH WARS, we now have bios and images of 5 Transformers characters from the Autobot roster. Included in this post are Optimus Prime, Bumblebee, Grimlock, Jazz, and Blaster. You can click on any of the images below to pre-register for Transformers Earth Wars. The bios are written by fan-favorite Simon Furman of Transformers comic book fame.

Committed, inspirational, selfless. Optimus Prime is all these things and more, a born leader and idealistic to boot. But what makes him a truly great leader, is his own lack of hubris, his seeming inability to place his life, his worth, above any of his fellow Autobots, or in fact any other lifeform. He believes passionately that freedom is the right of all sentient beings, and would gladly sacrifice himself to make that belief a reality.

A rampaging force of nature, Grimlock is the most feared and powerful of the Dinobots, as irascible and savage as the T-Rex his beast mode is modelled on. Combat is in Grimlock's spark, and periods in between battles are simply periods of great frustration and seething resentment. Any display of weakness is worthy only of contempt in Grimlock's optics, but he's not as dumb as he likes people to think, and his courage on the battlefield is the stuff of legend.

Bumblebee is among the most open and receptive of all the Autobots in terms of befriending other species, his wide-eyed wonder at his surroundings and his irrepressible enthusiasm, combined with a genuinely affable personality, make him perfect for first contact with an alien species. But don't let that fool you, he may be small but Bumblebee packs a punch in any battle, and he's unflinchingly loyal to the Autobot cause.

Loud, proud and in-your-face, Blaster has a zest for life and an unquenchable appetite for action. The louder and more intense it gets, the more it sparks his circuits.The opposite of sneaky, he prefers to make his presence known, literally assaulting his enemies with sound and fury. But his special passion is good old fashioned rock 'n' roll, and his ability to monitor multiple frequencies and channels has exposed him to a wide variety of music.

Blaster is aided by his three cassettes Eject, Rewind, and Steeljaw who are both fearless on the battlefield and amazing at reconnaissance, making Blaster and his team a force to be reckoned with.

Few assimilate local knowledge as readily and easily as chief scout Jazz, who devours alien culture with a hunger that can only be described as voracious. His knowledge of local terrain, geo-political nuances and customs makes him indispensable, and not only is he good at what he does - he does it with style. He may not be biggest gun on the block, and he can get distracted, but he still pulls off the seemingly impossible with cool panache.

Re: Character Bios - Transformers: Earth Wars Tantrum (1793869)
Posted by Va'al on May 31st, 2016 @ 12:24pm CDT
Also from our friends over at Space Ape Games - the folks behind shortly live Transformers: Earth Wars mobile game - we get some more character spotlight videos, embedded below! Get ready for one from each side, with Dinobot Slug and Combaticon Onslaught showcased in all their gamey glory.

Remember: if you like what you see, make sure to pre-register for the game by following this link!

Re: Character Bios - Transformers: Earth Wars Tantrum (1793981)
Posted by Va'al on May 31st, 2016 @ 4:33pm CDT
It never ends! Another update today from the folks behind Transformers: Earth Wars - Space Ape Games - in the form of two new videos, one old and one just released, from their Developer Diaries videos. Join Debs and the rest of the team as they go through some of the features in the creation of the game, and including Transformers comics cornerstone Simon Furman in The Universe of Transformers and ...yours truly as co-host in the Fan Influence video!

probably be the only way well get to hear welker and cullen use his dialogue. the games not realy up my street but i'll be streaming the youtube clips of any cut scenes now.

Re: Character Bios - Transformers: Earth Wars Tantrum (1794071)
Posted by Cobotron on May 31st, 2016 @ 9:37pm CDT
Well that was a treat to see the Seibertronians in there. Some other familiar faces too.
I knew you guys had gotten to go visit, but I didn't know you went as consultants!
Super cool guys.

Re: Character Bios - Transformers: Earth Wars Tantrum (1794191)
Posted by carytheone on June 1st, 2016 @ 11:50am CDT
Cool videos, I'm surprised to see how much work and research has gone into a mobile game. Guess I need to open my mind up a bit.

Super cool to see some familiar faces being involved.

Re: Character Bios - Transformers: Earth Wars Tantrum (1794193)
Posted by Seibertron on June 1st, 2016 @ 12:05pm CDT
Courtesy of our friends from TRANSFORMERS: EARTH WARS, we now have bios and images of 5 Transformers characters from the Decepticon roster. Included in this post are Megatron, Starscream, Soundwave, Bludgeon and Razorclaw. You can click on any of the images below to pre-register for Transformers Earth Wars. The bios are written by fan-favorite Simon Furman of Transformers comic book fame.

In his own way, Megatron is as much an idealist as his Autobot counterpart Optimus Prime, but Megatron's zeal sprang from a committed belief that beings such as they were made to conquer and rule, and that any hint of compassion or mercy was an insult to their Primus-given power. On Cybertron, he tapped into the frustration of those like him and enflamed their revolutionary leanings. The Megatron way was and is to rule through intimidation and fear.

Vain, arrogant, ruthless and self-serving, Starscream believes he was made to rule, not to serve, and he'll stop at nothing to advance his own cause.He'll betray anyone, ally or enemy — and that extends to his own leader, Megatron, whose tactics Starscream views as antiquated. He believes conquest is made from the ashes of his enemies, and woe betide anyone who gets in his way.

Though Soundwave appears remote, detached and clinical, he secretly delights in the cries and screams of his enemies. It's literally music to his audio receptors. Beneath his expressionless exterior beats the generator coil of a born blackmailer and opportunist, and it's wise to be very careful what you say within audio range.Though it's said that Soundwave can hear a fly sneeze a whole City State away. If that's not enough to put fear into the spark of an Autobot, Soundwave is joined by his minions Lazerbeak, Frenzy and Rumble who can shake, break and spy on even the most diligent bot. Be afraid, be very afraid.

Mysterious, stealthy and deadly, Bludgeon is a master of the ancient Cybertronian martial art of Metallikato, a combat style that borders on the mystical.The consummate assassin, Bludgeon locks on to his victim like a silent guided missile, and won't stop or deviate until he's claimed his scalp.A master swordsman, Bludgeon hides his true robot self behind an outer shell designed to strike icy dread into his victims.

Razorclaw despises waste in any form, and that extends to his own energy output. So it's perhaps understandable why so many mistake his long stretches of inactivity as laziness, when in fact his optics are carefully monitoring his surroundings, waiting for the optimum moment to strike. Suddenly, Razorclaw will explode into furious, ferocious action, during which his opponents are literally torn to shreds.

What the heck would the inner robot turn into since that form already turns into a tank. A smaller tank?
Re: Character Bios - Transformers: Earth Wars Tantrum (1794218)
Posted by D-Maximal_Primal on June 1st, 2016 @ 1:51pm CDT

Carnivius_Prime wrote:'Bludgeon hides his true robot self behind an outer shell'

What the heck would the inner robot turn into since that form already turns into a tank. A smaller tank?

Re: Character Bios - Transformers: Earth Wars Tantrum (1794230)
Posted by MGrotusque on June 1st, 2016 @ 2:45pm CDT
I'm real happy we got all bran new artwork and bios for these characters we've never heard of before!! How exciting.

You can find the Android Release right here in Google Play: https://play.google.com/store/apps/deta ... searthwars

You can then register right here: http://smart.link/5744bec51a8cf?site_id=Seibertron.com
and make sure you sign up for the Seibertron.com Autobot or Decepticon alliance. Simply Search "Seibertron"

And finally, a little video to help pump you up: