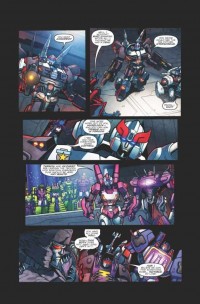 The official Transformers facebook page has shared this week's Creator Commentary for Transformers: Robots in Disguise Ongoing #14. IDW Senior Editor and writer John Barber gives us some insight into this issue's first five pages. We've mirrored the commentary below for those of you without facebook access.

PAGE 1- The rioting Decepticons, as seen in the previous issue, are gone thanks to Metalhawk's efforts. Having introduced the character in the first year of RID, how do you think the character has changed from issue 1 to where we are now?

JOHN BARBER: Metalhawk was away from the action for most of the war. When he came back to Cybertron, back at the start of this series, he didn’t know who was who, who’d done what, or why anybody was acting like they were. He’s definitely learned the lay of the land since then, but he’s still very much an outsider in terms of really understanding the main conflict. He gets it a little more now, but he hasn’t been on the front lines like Bumblebee or the others.

As readers, I think we’ve learned more about him, and what makes him tick, a little more. At first, the idea was that we wouldn’t be able to tell if he was honest or if he had Machiavellian plans going on. Plus, as readers, we’ve been privy to all kinds of details about the Autobot/Decepticon war, and that, combined with Metalhawk’s general demeanor, kinda made him irritating. Now I think we know him a little more—we’ve seen his contradictions and his flaws and he’s a little more human… well, you know what I mean. I know some people don’t trust him yet—fans, I mean—and maybe they’re right.

Whatever the case—he can still be pretty insufferable. But he was able to get most of the population off the streets, when Starscream and Bumblebee’s efforts were fruitless.

PAGE 2- Metalhawk reports in and Prowl’s deception from the previous issue is revealed. Events have been building up to the next few moments. When actually coming to doing the issue, were any pages like this clearly pre-though out or did they just lay themselves in any surprising ways?

JOHN BARBER: Well, everything with Prowl was planned from the outset, and his actions over the course of the series were very deliberate. I mean, everything he did had to map onto what he was pretending to do, and also what he was actually doing. If that makes sense. Like, if Prowl gave an impassioned speech to Bumblebee to keep Bee going, it had to make sense in terms of what the reader thinks Prowl was doing, not just what artist Andrew Griffith (and editor Carlos Guzman) knew he was really doing.

So, in that sense, everything had to be pretty much thought out. In terms of this scene, and the reactions of characters… Blurr is ready to believe the worst—and not without reason—but even Sideswipe has to admit he sees his point. There are little surprises here and there with how characters have grown over the series, and how they react to events. Like, when Bumblebee ordered that the Autobots open fire on Megatron when he returned—that wasn’t in the original outline, I just realized that that was what Bumblebee would do at that point. And Megatron wasn’t counting on that, either, so events had to adjust. Anyway—Andrew just does such a great job making it all sing and acting the reactions of Sideswipe and Blurr and everybody.

PAGE 3- Dirge reveals that Prowl has been working with the recently returned Megatron for quite some time. It’s a question of what to do next. With his world collapsing around him, is the focus still going to be how Bumblebee deals with situations as a leader, even in the most dire of circumstances?

JOHN BARBER: Well, Dirge doesn’t say anything about time, or how long anything’s been going on.

Bumblebee… well, it would be nice if Bumblebee figured out what to do here, yeah.

PAGE 4- Prowl and the Decepticons together, and Megatron requires a new body. How much design work goes into producing these Cybertronian looks for the characters? Are they made with other products in mind?

JOHN BARBER: It’s super-easy for me! I just type their names and say to make them look cool, and boom, there they are!

Seriously, Andrew Griffith knocks himself out on these. He sometimes bases the designs on existing toys or on the video game looks, but always brings a little flair to it. And other times they’re new designs entirely, like Prowl… and you’ll find out why Prowl is like that later this issue.

We don’t really have other products like toys in mind per se, but there’s a lot of back and forth between the comics and the toys, as you might have seen at Toyfair, where Hasbro revealed some new Transformers figures that tie in directly with the comics. It’s all great fun—the guys making the toys are loving what we’re doing; everybody making the comics are loving what they’re doing. It’s a fun time.

PAGE 5- Bumblebee, Metalhawk and others are pondering about the Decepticons next move. This issue marks a huge shift in the series. Has it always been the intention to explore the facets of peace and how they affect a given society?

JOHN BARBER: Um. Yeah, this is a big change. We’ve been looking at how a society tries to stay together, and rebuild after a war. There are always questions of freedom and security and justice looming over everybody. Sometimes imagined threats, or perceived problems, can give room for bigger, real threats and problems to grow. It’s also about a society trying to change… there are always forces from within that want to stop any change from occurring.

Down_Shift wrote:A question. Who designed the stealth body for Megatron? Was it Don?

The first story he shows up in (Heart like a Wheel, Ongoing #13) is written by Mike Costa and drawn by Nick Roche.
So unless someone else has other knowledge, I'd say it's their idea.
Re: Creator Commentary: Transformers: Robots in Disguise Ongoing #14 (1468573)
Posted by Down_Shift on March 2nd, 2013 @ 2:19pm CST

Down_Shift wrote:A question. Who designed the stealth body for Megatron? Was it Don?

The first story he shows up in (Heart like a Wheel, Ongoing #13) is written by Mike Costa and drawn by Nick Roche.
So unless someone else has other knowledge, I'd say it's their idea.

I wonder if it's his original concept or if it's someone elses. Doesn't seem like a Roche design to me. But, I could be wrong.