MegatronSRT8 brings us news that NASCAR drivers Jeff Gordon and Ryan Newman are going to be running special paint schemes at the race on October 17th, in Charlotte NC to promote the release of ROTF on DVD and ESPN is running a contest where you can win a copy ot the DVD signed by Megan Fox, or a trip to the NASCAR Championship weekend and meet both drivers. 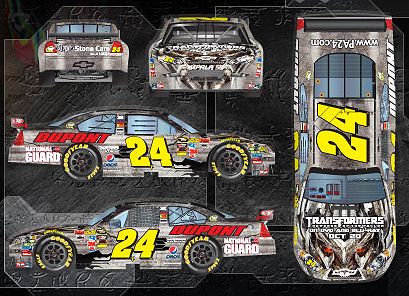 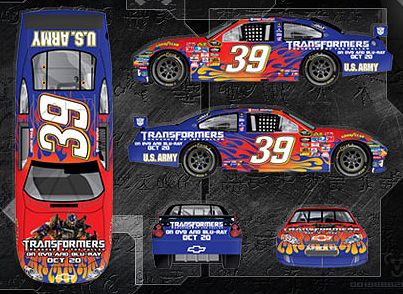 (Thanks to Jayski.com for the pics of the cars)

Here's the link to the contest sight where you vote to see who will win the battle between the Autobots (Newman) and Decipticons (Gordon) on the track - a.k.a who finishes ahead of the other.

Click here to see the contest details in full.

Not really voting because of the pilot...

Gordon: " Is the future of our sport worth a single race?"

Newman: " You'll never stop at one..I'll take you all on!" Proceeds smash thru everyone on the track till Gordon takes him out from behind stealing first. We can only hope anyways hehe.
Re: ESPN & NASCAR and ROTF Contest. Win a signed copy of ROTF DVD! (1006393)
Posted by MegatronSRT8 on October 4th, 2009 @ 12:45am CDT
Ive been a Gordon fan since his first year in cup so for me this is really cool. I have his Episode 1 and 3 Star Wars die-cast cars and will be buying the Megatron one for sure. Obviously I have an affinity towards a silver car named Megatron...lol. Too bad Gordon drives an Impala and not a Charger