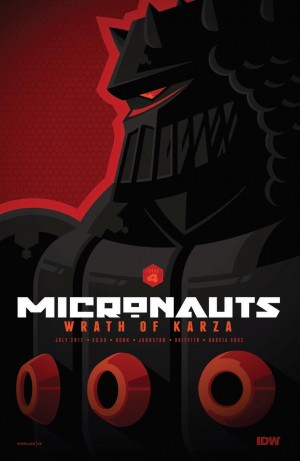 As first seen on Comic Crusaders and as pointed out by Seibertron.com Energon Pub Forum user Daniel Adkins, the five page preview for Micronauts: Wrath of Karza #4 is now available. As the conflict escalates, the action picks up and if you've been keeping up with the series, you'll expect some of our favorite robots in disguise to appear very soon. Pick this issue up this upcoming Wednesday, August 16th to find out what happens next, and enjoy the preview pages below! 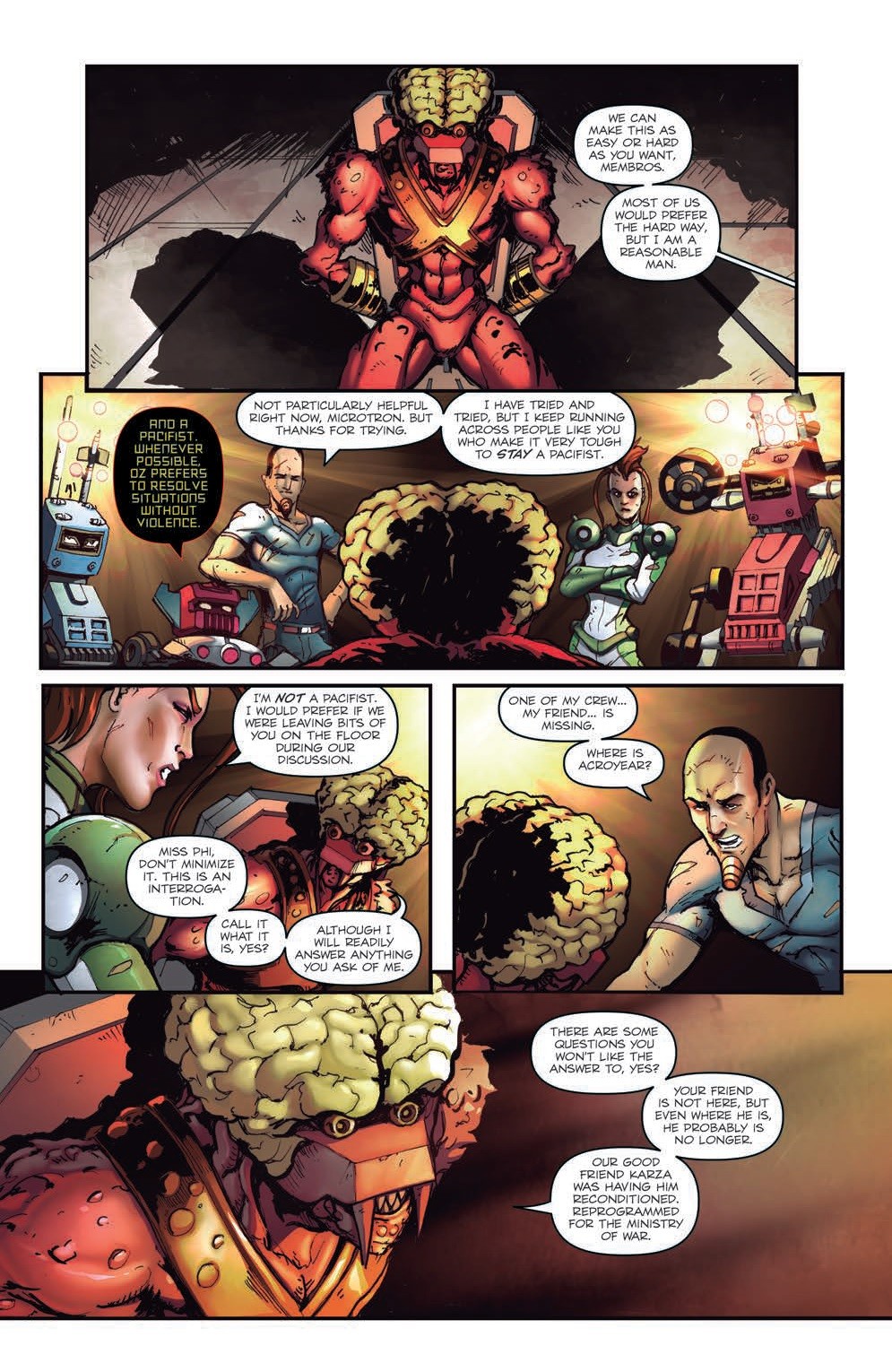 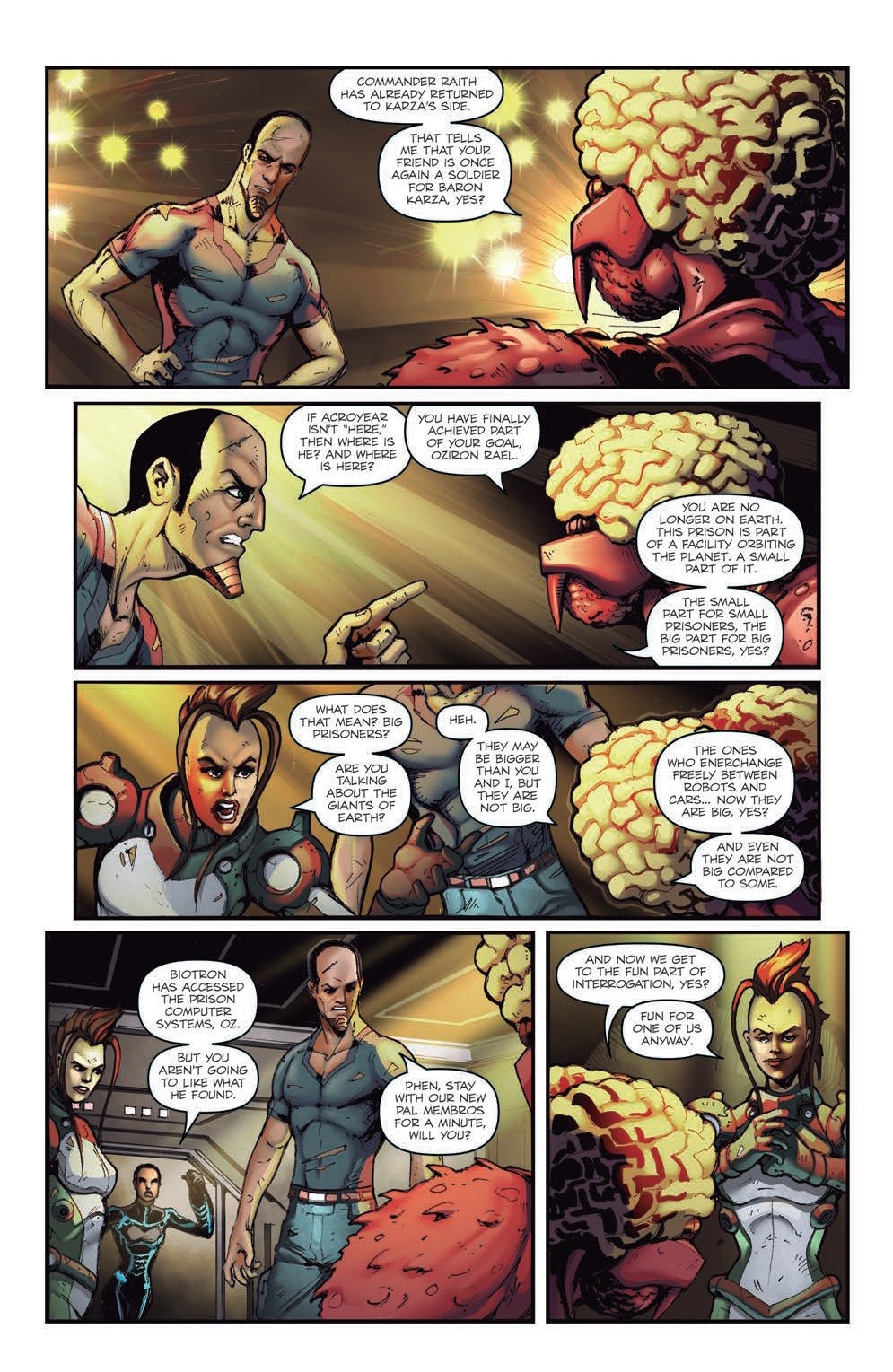 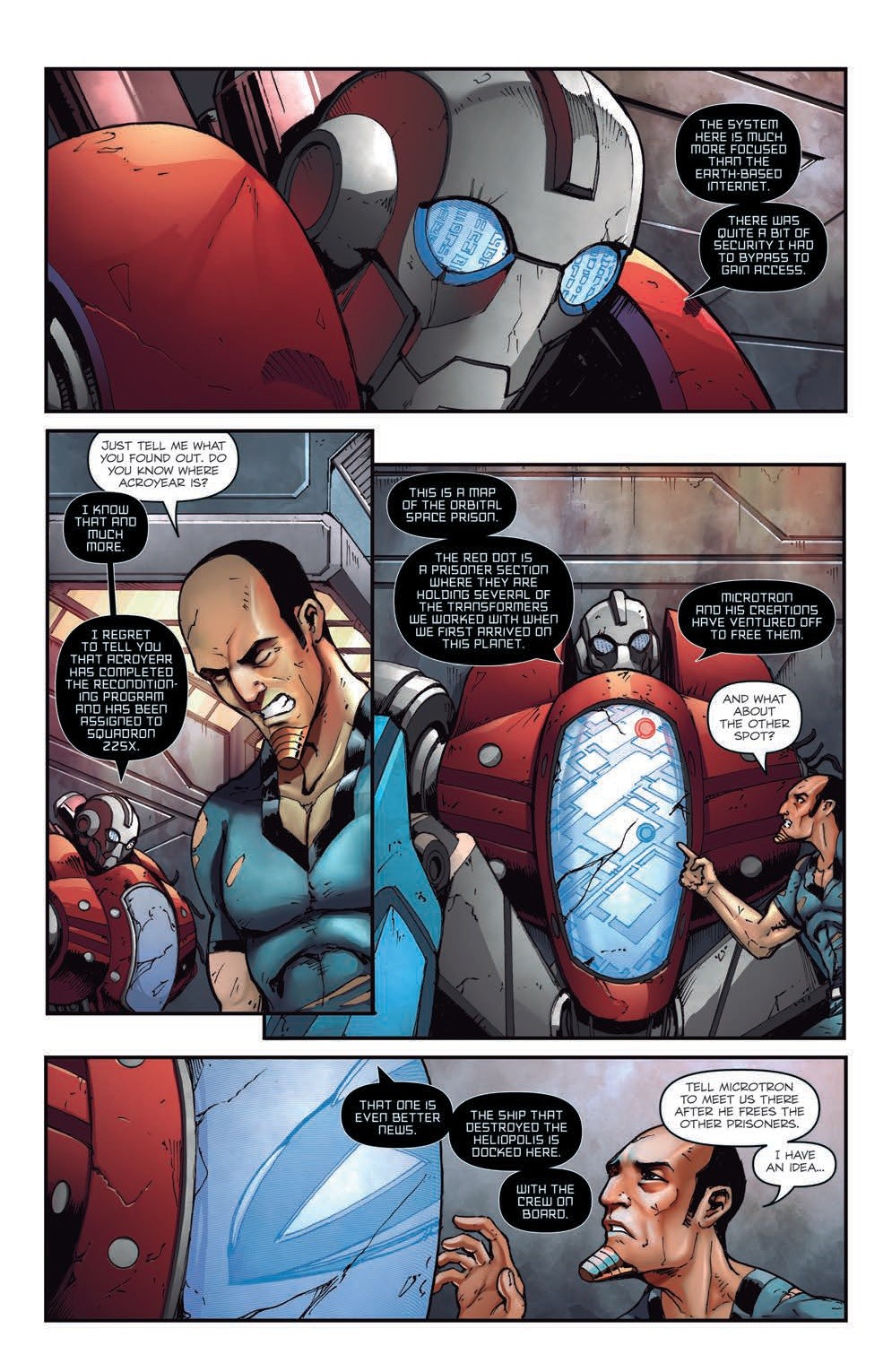 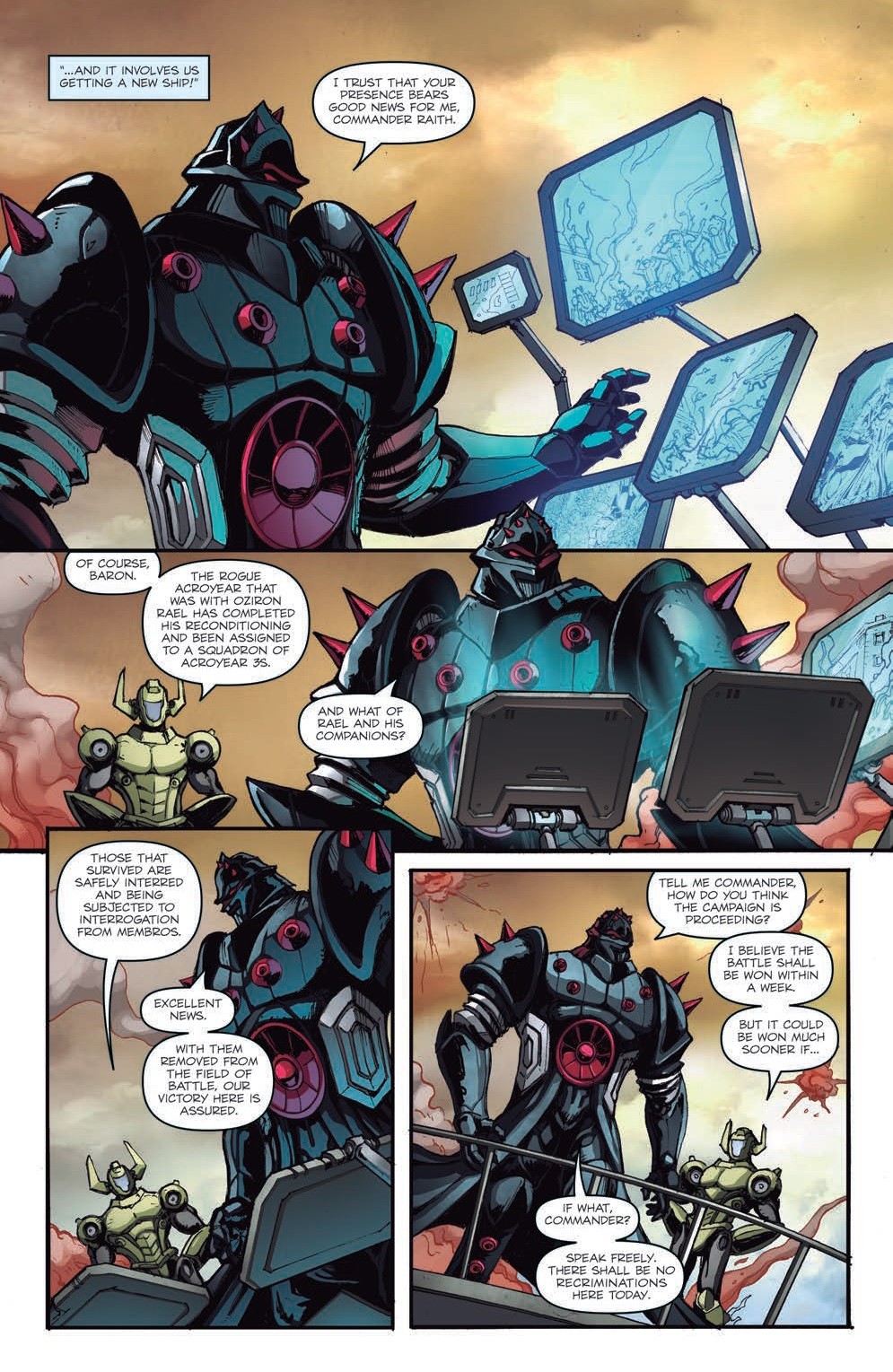 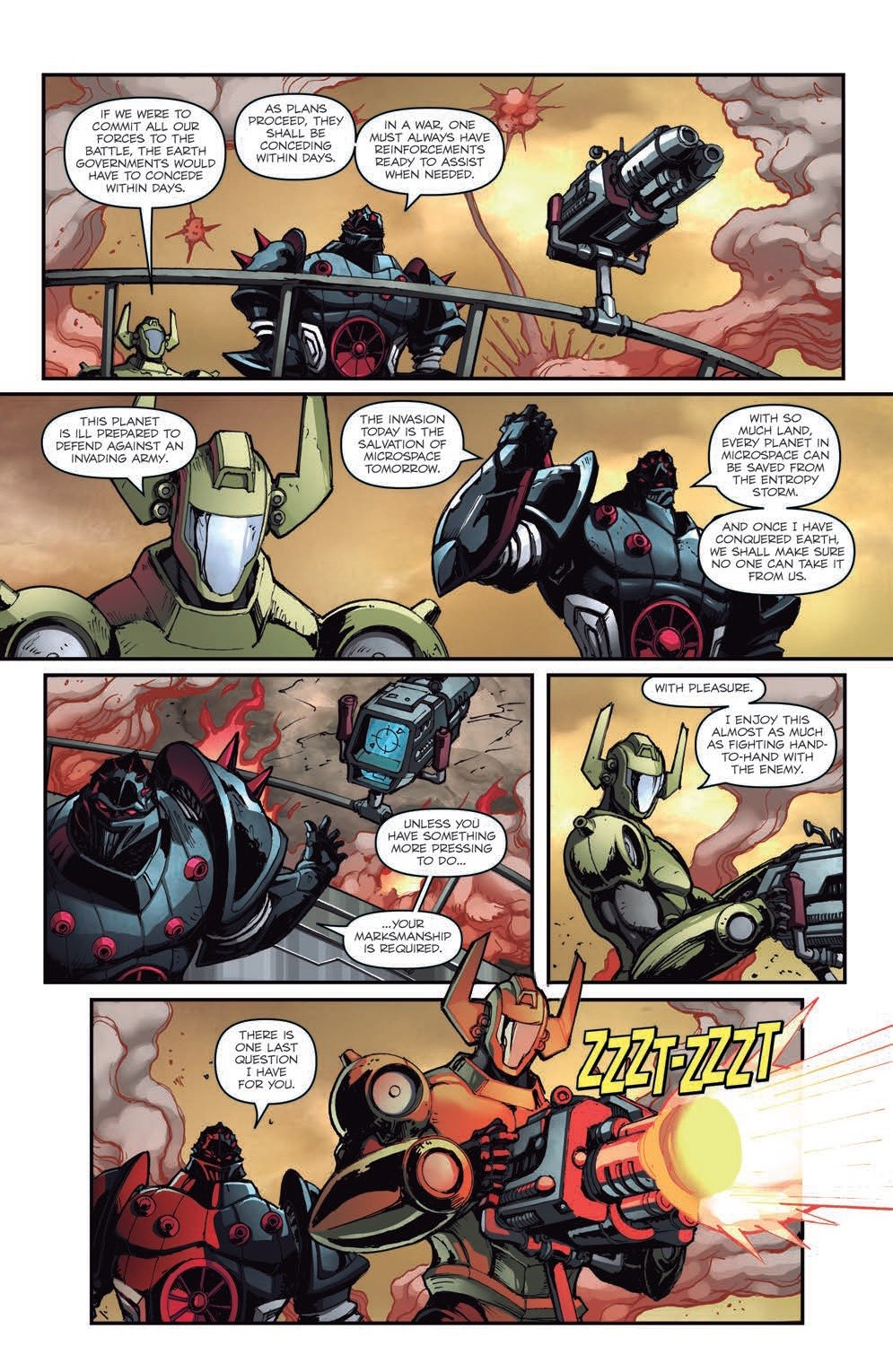 Free of too many spoilers. There's at least one. 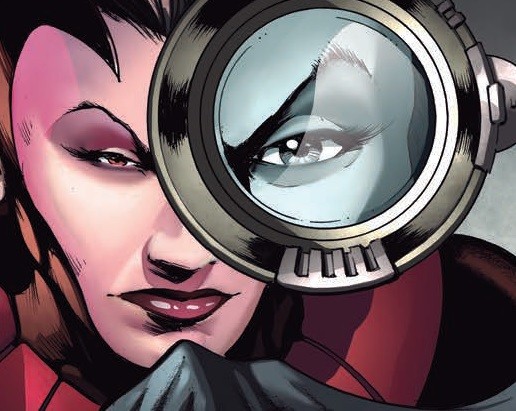 See, right there. It goes just before Optimus Prime #1

The partial-crossover event that leads into First Strike carries on, though as things have progressed it actually appears this story fills a time-gap between Revolution and Optimus Prime in the greater IDW Hasbro Universe's continuity. That's not really what's important here though. If you read my review of Wrath of Karza #3, you'll have to excuse me if I repeat myself because many of the same feelings have carried over to this fourth installment (out of five) for this mini-series. There's action, there's character building, there's good art, and most importantly there's fun awaiting readers of this latest comic from writers Cullen Bunn and Jimmy Johnston.

Why is there a centaur? Yes.
The character roster has branched out on the "bad guy" side of things, with the well-tread Acroyear armies of the Microspace Ministry of Defense now being supplemented with other various creatures inspired by the old Micronauts toyline. This enhances the IDW Micronauts world in a charming way by showing readers a diverse range of miniature alien life that works because this is a universe that doesn't really need a bunch of rules to follow. Microspace is a universe created by one of the Thirteen Primes and is inhabited by beings that can merge with other beings, flying reptilian things, biomechanical androids, and even time travelers. It's nice to see the authors being fearless when it comes to adding to the roster regardless of the general lack of focus placed on Microspace in the scope of the larger IDW Hasbro Universe. 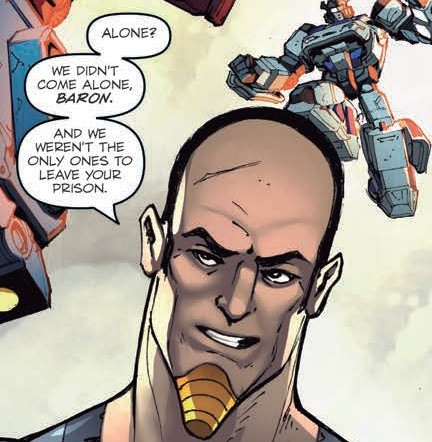 That's the spoiler, so sorry, but maybe it will make you care?
Of course you're browsing Seibertron.com and it'll be hard to continue justifying comics reviews for books that don't have Transformers in them. With that said I'll just cut to the chase, and pardon the spoiler - yes, there are some Transformers in this book (like Jazz pictured above) and they have a prominent role in the later stages of this issue's plot. They're used in a fun way with Bunn and Johnston staying true to their generally established characterizations while also providing dialogue for them that goes plenty beyond the average/low expectations that one would have for "Transformers writing in a piece of media where they're supplementary". Just like the playfulness that's inherent with the new denizens of Microspace that have recently appeared, the Transformers are used in an entertaining fashion.

Ah shucks, made the ManBearPig joke last review
The art is well executed once again, with familiar name Andrew Griffith taking the helm for most of the pages while Ron Joseph lends an assist for two pages in the middle focusing on Shazraella. They're complemented by David Garcia Cruz on colors, who takes advantage of the varied environments utilized in the story. Different palettes are used throughout the outdoor scenes that give a dusty, sandy, and war torn look. Meanwhile, cleaner blacks and grays are seen throughout interior settings which helps the delightful weirdness of the books' characters to stand out in contrast even more. Tom B. Long is on letters and provides all the THWA-WOMPS that something with this much action needs.

A few covers are available this time, including the Tom Whalen variant featuring Baron Karza if you're looking to collect that set of various IDW books. As always, you can see all the covers and credits in our database page for Wrath of Karza #4. 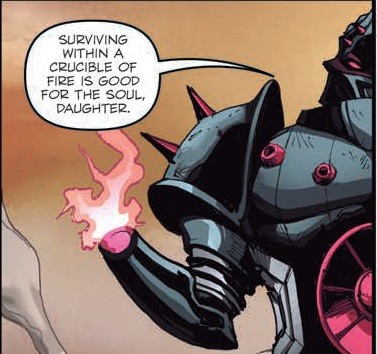 It's not that bad, actually!
This keeps up the fun that I've come to expect from IDW's Micronauts and adds some additional Transformers flavor to the mix this month. Overall, this is a solid chapter in a story that I look forward to seeing the ending of. The final page makes it clear that readers can expect the fifth and final issue of this mini-series to have some ramifications on a character that solicitation-text readers will know is set to feature in First Strike over the next couple of months, but I do admit it felt a little underwhelming due to knowing this in advance. Maybe if the release schedule wasn't running a full month behind for this series that would have been different.

The only real critique that makes me put this one a notch lower than issue 3 stems from some of the panel layouts in the latter stages. Karza and Oz have a confrontation that feels more like a circular conversation, but this isn't really the art within the panels causing it. Rather, it's the amount of panels covering others in ways that feel understandable but end up coming off a little cramped in a spot or two. This takes what should be happening in a more open environment and focuses it a little too narrowly for my tastes. Granted, this could just be due to how we reviewers have to consume sample copies on digital documents and the print edition won't have this perception carry over. Here's hoping it doesn't, and I hope you'll give this series a shot if you haven't!

Re: IDW Hasbro Universe - Micronauts: Wrath of Karza #4 Five Page Preview (1909005)
Posted by WreckerJack on September 7th, 2017 @ 2:25am CDT
Fellow Seibertronian Soundwave902 has pointed out that Wrath of Karza #5 has a preview up. According to the description this will be the final chapter. Pre orders are available on iTunes, the expected release will be on September 20th.

The final chapter! Baron Karza has conquered Earth! Only the Micronauts and the Transformers stand against him! Little do they know that a new enemyãa much more dangerous enemyãwill rise to challenge friend and foe alike!¾And one hero makes the ultimate sacrifice! 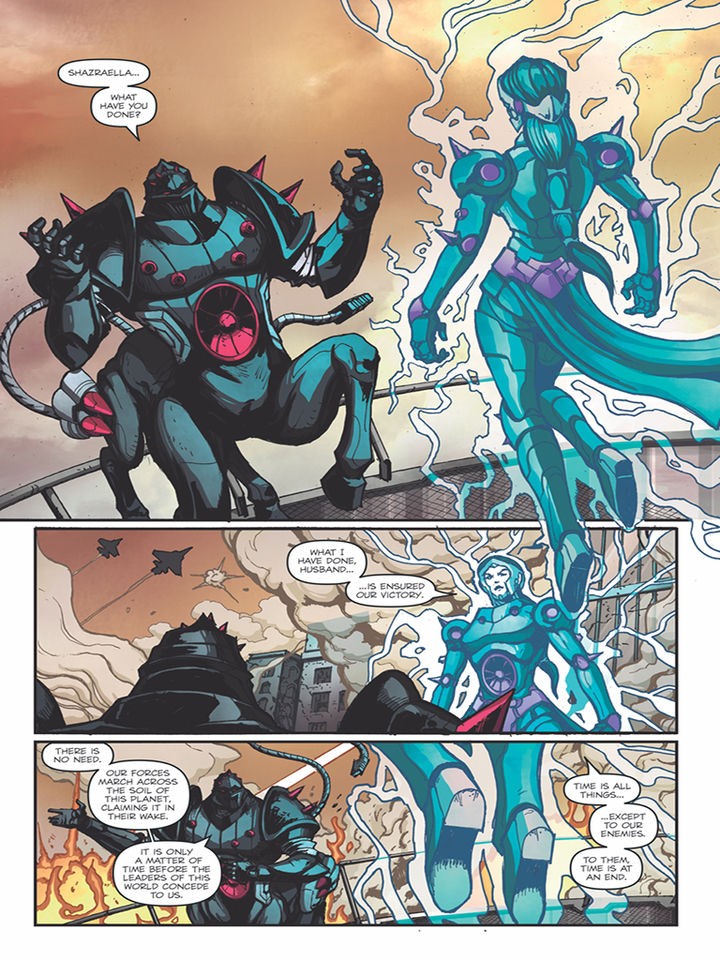 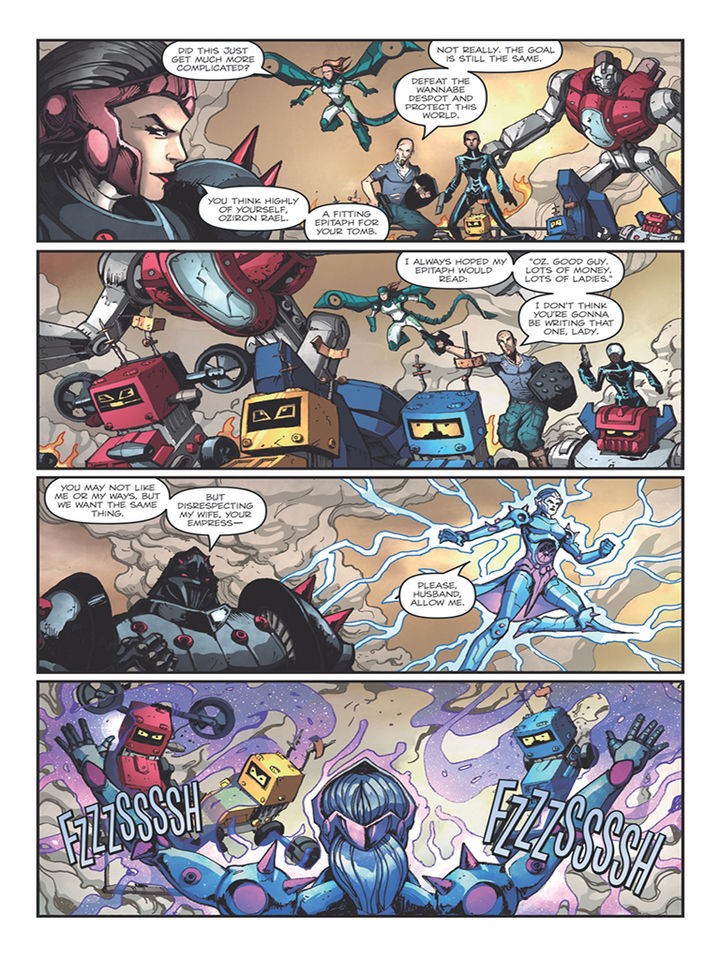 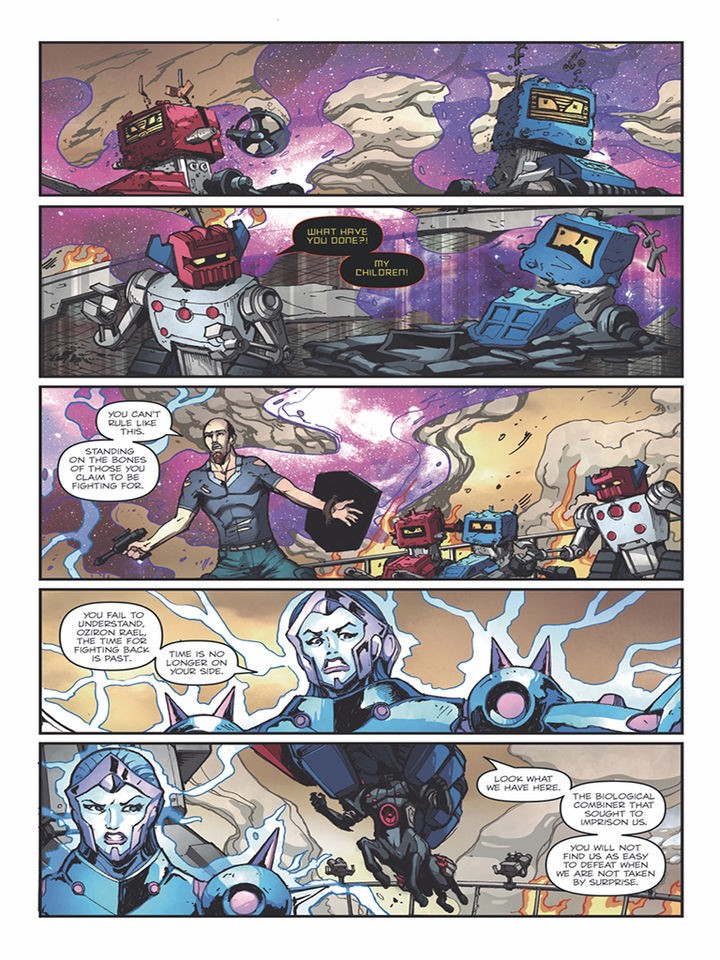 The final chapter! Baron Karza has conquered Earth! Only the Micronauts and the Transformers stand against him! Little do they know that a new enemy—a much more dangerous enemy—will rise to challenge friend and foe alike! And one hero makes the ultimate sacrifice! 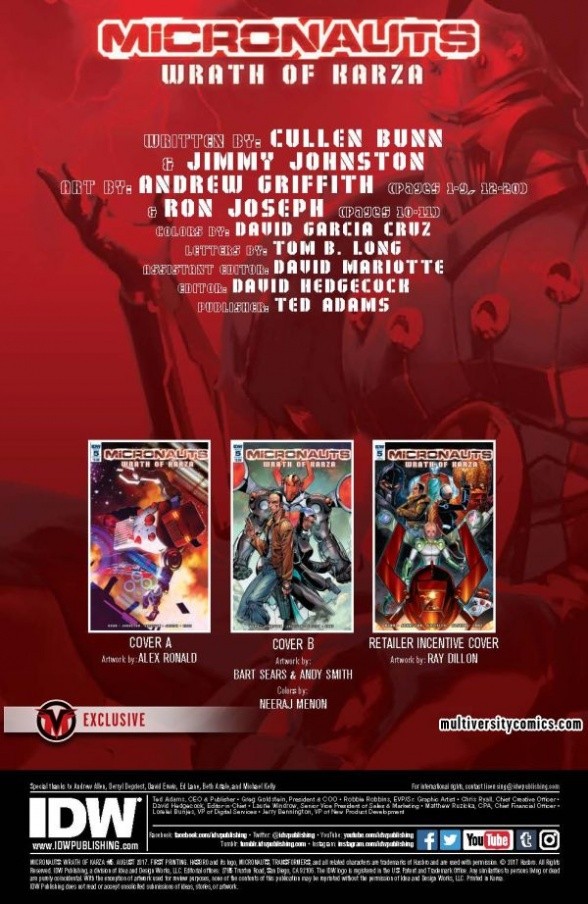 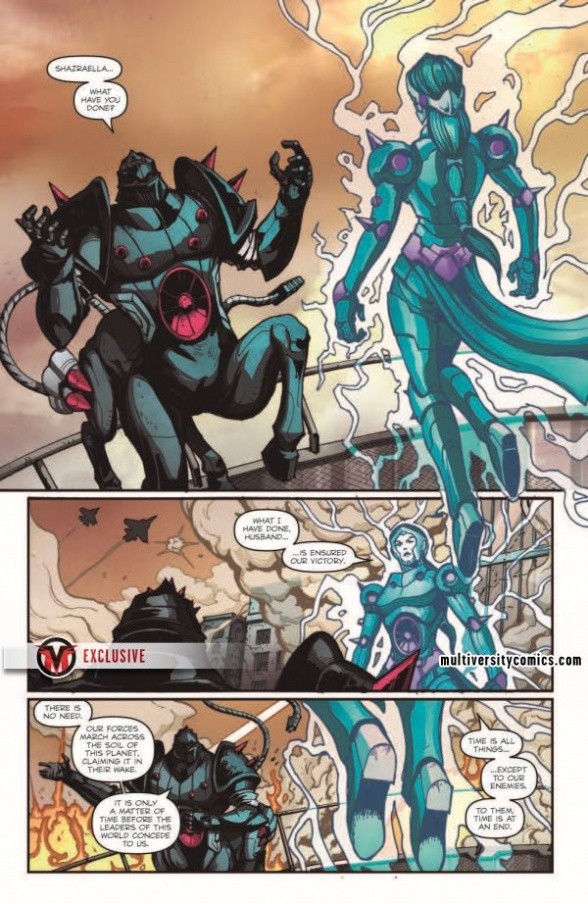 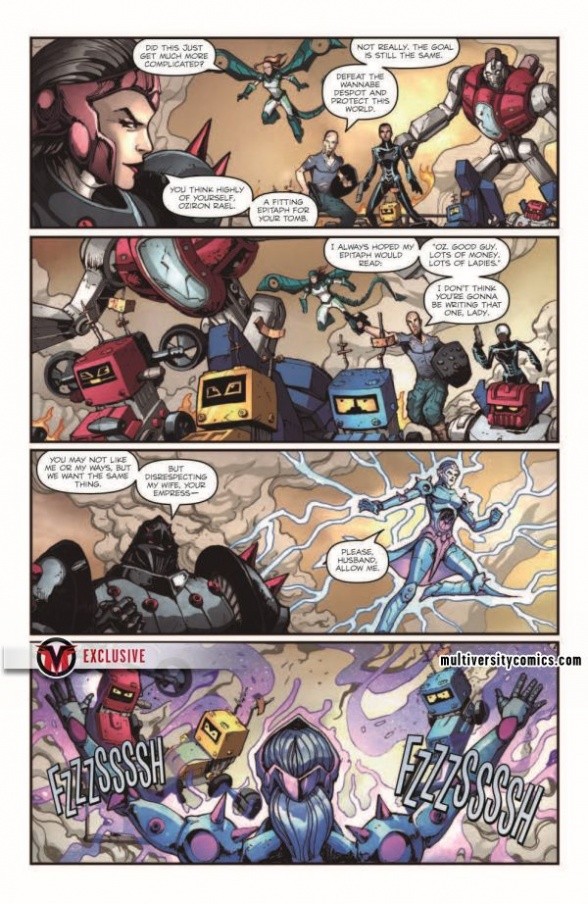 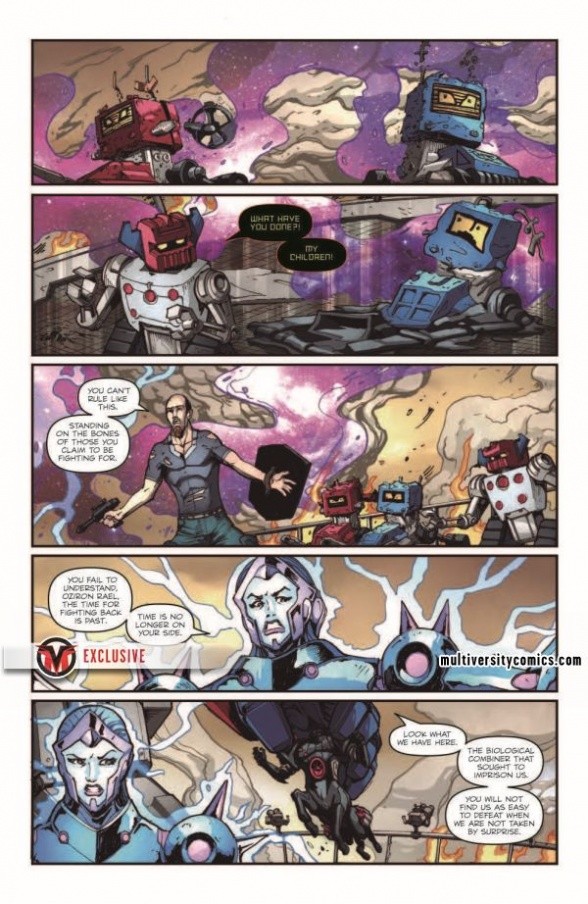 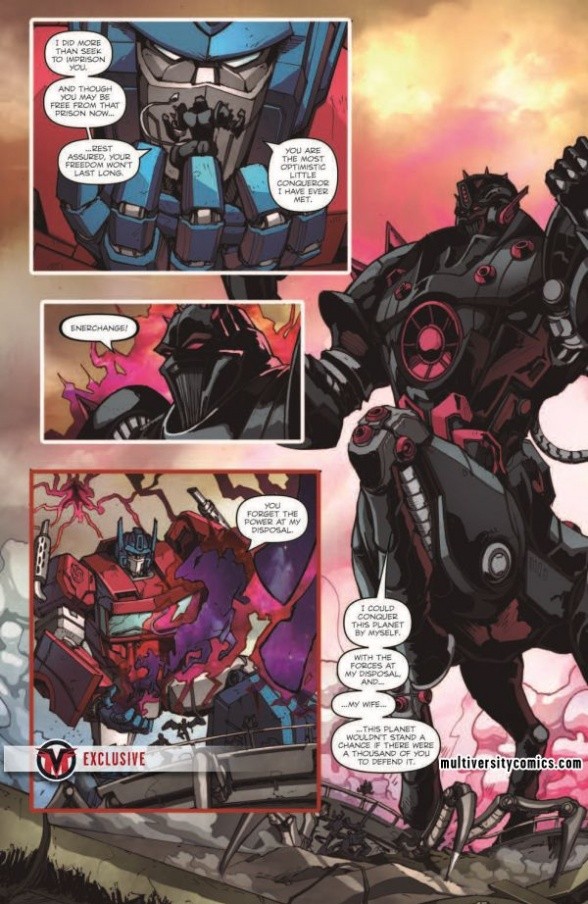 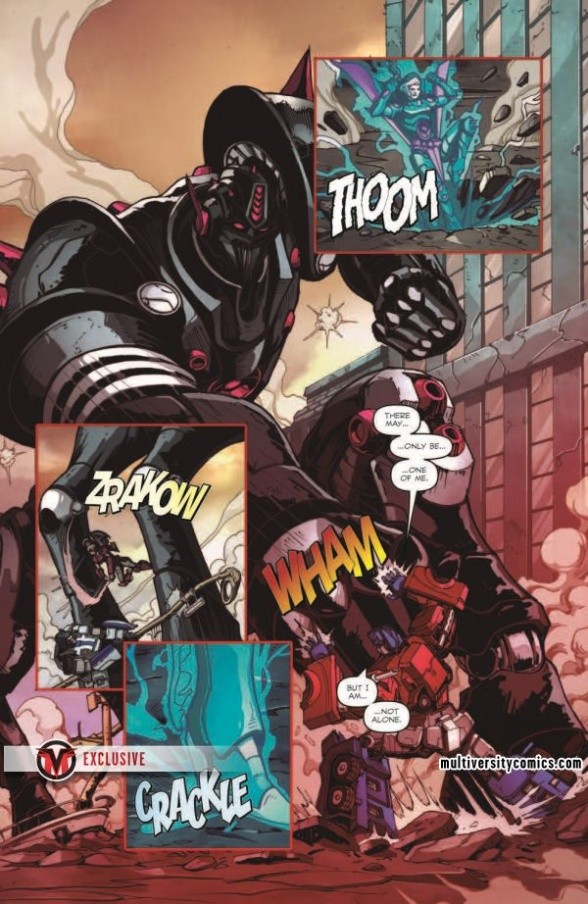 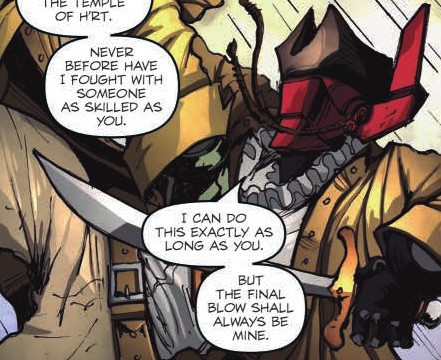 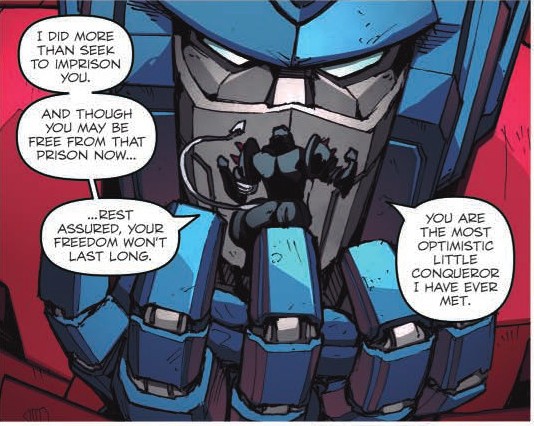 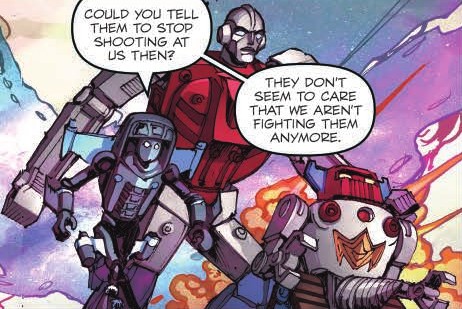 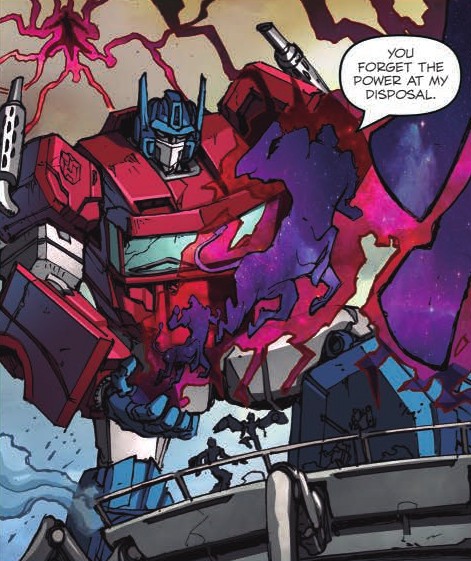