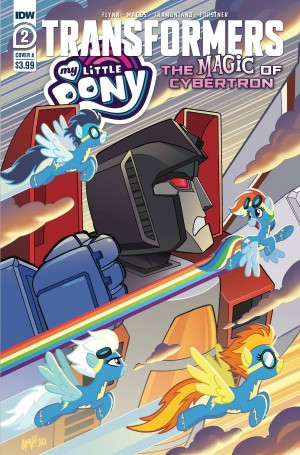 Wild Wild Wheel
A Review of My Little Pony / Transformers II: The Magic of Cybertron #2

A Few Spoilers Within - Hey Here's One Already!

We've been a little behind in our comics review coverage, but it's time to get started on our catch-up and what better way to do so than with the most recently released Transformers comic out there, My Little Pony / Transformers II: The Magic of Cybertron #2. This issue came out last Wednesday and like the first iteration of this lighthearted crossover series each issue features two short stories by different creative teams, loosely interconnected by a higher-level narrative. This time around, it's the evil Sombra that has enslaved some of the Cybertronians and ponies and compelled them to do bad things, or, uh, something? That part's not important, read on for more on why that is.

It's dumb, it's fun, it's not for you. Or maybe it is.
The first story sees Rainbow Dash and a group the book tells me are called the Wonderbolts have a quippy aerial dogfight with the classic trio of Decepticon seekers. It's the kind of story that's pretty typical for this particular crossover, with quick action and quick wit to pair with it. Providing a good sample of the humor found within this series and its forebear, this first story by writer Ian Flynn is easygoing fun that's easy to appreciate. The wider narrative gives it some setup, but I have my doubts as to how much it really even needed setup beyond "flying ponies and grumpy plane robots get in a scuffle".

じー
The second story proves that sometimes the best crossover opportunities are those not taken seriously, with Applejack and Wildwheel - yes, seriously, the amazing Wildwheel from season 3 of Cyberverse - in a wild west stand-off. Following Killmaster's (yes, with the wand and everything!) cameo in the first issue, MLP/TF II, or perhaps just writer Sam Maggs, continues to flex some actual deep-cuts that aren't G1 related, which is intensely refreshing to see. I adored this part of the book visually as well, with Trish Forstners lines and Luis Antonio Delgado's colors going for a simple approach that just works without making things over-complicated.

Majestic
The art in the first story deserves credit as well for its approach, with familiar talents Priscilla Tramontano and Joana Lafuente taking a busy set of blocking but living up to the challenge it presents. The layouts are clean and easy to follow, something that you don't have to be a younger reader to enjoy. Jake M. Wood and Neil Uyetake take care of the letters for the first and second story, respectively, with the highlights of their contributions being the appropriate and well-executed onomatopoeia work. "Skyow"? Perfect.

Tony Fleecs provides the "A" cover that you can see in this review's news post's thumbnail image, while Bethany McGuire-Smith and Adam Bryce Thomas handle art and colors for the variant options. As always, you can find all the cover images, full credits for the issue through our My Little Pony / Transformers II: The Magic of Cybertron #2. 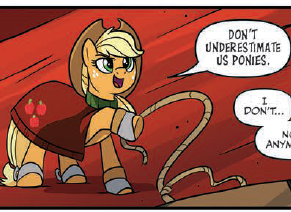 What about a regular sized estimation?
This book isn't going to bring you some massive, sweeping epic that changes comics forever, and you shouldn't expect it to. My Little Pony / Transformers II: The Magic of Cybertron is a book that's fantastic fun for both young readers and adults, bringing lighthearted, easy-to-read adventures that I've begun to look forward to. The overarching narrative is helpful at times though it seems to distract at others, and while it's not in a majorly negative way I did find it to be the one speedbump in the issue's otherwise flawless presentation.

Please remember to set your expectations as to what kind of book this is before you go on this journey, but if you're either ready for some good, simple fun or just want to delight a young Transformers (or My Little Pony) fan in your life, I can't recommend this enough.

This issue is out now, and you can pick it up at the Seibertron.com eBay store or at your local shop, check here to find the closest shop to you.