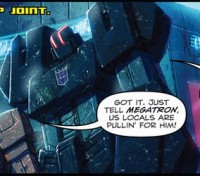 A Tale of Two Leaders
SPOILERS!

Here it is – the issue we have been waiting for, and it does not disappoint. Having been captured by Starscream in an attempt to stop Soundwave escaping with knowledge of Zeta Prime's new weapon, Orion Pax is brought before Megatron and he is every bit as intimidating as you would expect him to be. Sitting like an emperor on his throne, basking in the attentions of his servants, Ramondelli’s Megatron reveal is a delicate balance between his ancient-era tank style altmode and his traditional G1 form, instantly recognisable and utterly menacing, and the conversation he has with Orion in the bar is certainly the same.

But let’s not overlook Metzen and Dille’s smaller details. The initial panel of the local citizen pledging himself to Megatron’s cause, the vandalised Autobot symbol on the wall and the terrified bartender taking cover during Pax and his team's escape keep the mood dark, Nyon no longer belongs to the Autobots. Small details such as this are vital to the setting of the scene for what’s to come and an indication of how things must get worse before they can get better, and the follow up with Zeta Prime is no different.

A sneak peek at the 3D glasses for Transformers 4?

Megatron’s decision to allow the fleeing Autobots to escape is the key point in this story. Having planted the seed of insurrection in Orion’s head, he allows him to take what he has learned to Zeta himself, where the comic takes on a different tone altogether. We have already discussed that this Prime is a dictator – he rules the planet and will retain his grip by any means, as Swindle well knows from issue 2. Unsurprising then, is his treatment of Pax in his debriefing, critical and dismissive, unaccepting of excuses and unwilling to have his decisions questioned -- this is a leader set up for a fall, unlike Megatron who is set up as a potential victor.

This guy is just up in everyone's grill today.

Offering Pax and his crew one last chance, Zeta hands them a final mission: to return to Nyon to make an example of an insurgent whom readers will instantly recognise. The question is, will Orion's loyalty to the Autobots really stand up to this test?