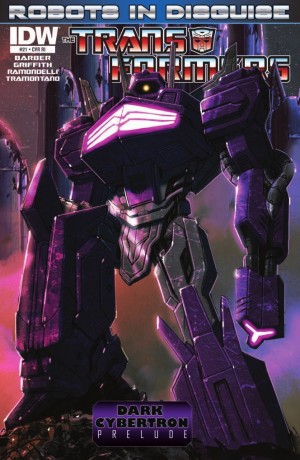 SHOCKPOINT! In the wastelands of CYBERTRON, SHOCKWAVE makes his move—and SOUNDWAVE and the DECEPTICONS step up to stop him! While the battle of the century rocks the ancient ruins of the Crystal City, dig back into the history of these titanic rivals!

Story
Dark Cybertron draws ever closer, but with MTMTE finishing off its arc this week, RID chooses to stall another month, giving us some insight into another of the major players in what lies ahead for the Transformers universe. This time, we take the superior vantage point of the observer and Decepticon communications expert: Soundwave.

While the technique is essentialy the same as previous issues with Bumblebee, Arcee and Starscream, Barber has added some time-shifting into the mix, allowing for Soundwave's tale to shed some light onto his own past and Shockwave's, through his interactions with and observations of him, and reveals more of our protagonist's personal beliefs.

We find out in the first couple of pages about Soundwave's synaesthesia, his relationship with emotions and feelings, his distrust of Shockwave and loyalty to Megatron, how it all began, how it worked, and how it might end up now that all is crumbling (again). His attachment and relationship with some of the cassettes is also briefly explored, in passing.

Yes, it's another stalling issue. Yes, it's another caption monologue focused on one character. But it's Soundwave, it's well-written, it bounces around it time and continuities and actually gives us some inkling as to what's about to happen!

The artwork. Barber had a brilliant idea here, getting both Andrew Griffith and Livio Ramondelli to work together, one taking over the present-day narrative, the other on flashback duties. And the writing blends in perfectly, by the way. But the two very different styles, with different incarnations of the characters work amazingly together.

Griffith and Ramondelli, not necessarily in that order

Colour duties are down to Ramondelli for his own pages and linework, and the amazing Priscilla Tramontano for Griffith's work. Once again, she does not disappoint, getting some nice red visor flare in Soundwave's features, and a particularly effective use of appropriate lighting in different settings. 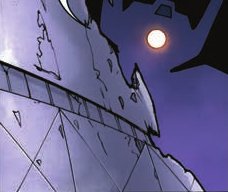 Shawn Lee's lettering continues to pleasantly surprise, too, with some excellent work on soundwords and speechbubbles throughout, meshing well with the different characters. And it's very nice to see three very different covers by Griffith, Ramondelli and Casey Coller with Joana Lafuente's colours.

An issue that showcases Barber's writing talents at his best: the upcoming crossover, continuity references and inner monologues, while flicking through time. It may not advance the plot much, or at all, stalling once more before the beginning of Dark Cybertron, but boy does it deliver by focusing on Soundwave.

And so does Barber

The mixture of artwork is brilliant, using Ramondelli's flashbacks with Griffith's present, and the issue just looks fabulous all round. Highly recommended Spotlight: Soundwave part 2, with some great Shockwave backstory to boot!

gothsaurus wrote:I have to disagree... I HATE mixing these styles together in the same comic. Love them separately though.

Don't you think they worked well with the different stories being told?

To each their own, I suppose. I thought it worked quite well!

Re: IDW Transformers: Robots in Disguise #21 Review (1520519)
Posted by reluttr on September 28th, 2013 @ 12:17am CDT
I find it interesting how soundwaves minions represent different versions of the characters.

-Ravage is based on Energon Battle Ravage, just a bit more rounded out and correctly deco'd.
-Laserbeak is based on WFC/FOC laserbeak
-Buzzsaw is based on G1
-Frenzy and Rumble are based on Classics/Universe/Generations

Im not 100% sure about ratbat, but he appears to be based on the new MP one. Which would also count as g1 I suppose. XD
Re: IDW Transformers: Robots in Disguise #21 Review (1520528)
Posted by Manterax Prime on September 28th, 2013 @ 1:25am CDT
Maybe Hasbro will finally give us Frenzy and Rumbla as the deluxe tankformers in the new Generations line at some point.
Re: IDW Transformers: Robots in Disguise #21 Review (1521288)
Posted by Va'al on October 2nd, 2013 @ 12:14pm CDT
Some of you may still be waiting for September's issue of Robots in Disguise (21), and wondering what has happened to it. Mariel Romero, digital assistant at IDW, has the answer! Both 21 and 22 will be release in October, one on the 9th and one on the 30th - so make sure you pick your copy up next week. In the meantime, check out the preview and review.